(Located at the Sandy City Cemetery. )

The cemetery in Sandy, Utah

Located twelve miles south of Salt Lake City, Sandy City was founded in the 1850s as a farming settlement. The majority of these early farmers were members of the Church of Jesus Christ of Later- day Saints (LDS or Mormon Church) who were encouraged by their church leaders to pursue agricultural activities and establish self-sufficiency. When work on the Salt Lake LDS Temple began in 1852, Sandy became an essential way station as the granite for the building was cut from Little Cottonwood Canyon, located just east of Sandy. During the 1860s and 1870s, settlers came to Sandy with the promise of easy land grants in the less crowded south valley. In 1863, precious metals were discovered in the canyons located just east of town and the early history and development of Sandy parallels the history of the mining industry. The farming town soon changed to suit the clientele; hotels, saloons and brothels dominated Main Street. Sandy became an important diversified hub for farming, granite cutting, mining and smelting. In 1873, LDS church leader Brigham Young christened the town “Sandy” for its thirsty soil.

The first major period of development in Sandy is known as the Mining, Smelting and Small Farm Era, 1871-c. 7970. In 1871, a 160-acretown site was platted, a number of sampling mills and smelters were built and Sandy became a strategic shipping point. While the dominant economic force during the 1870s through the 1890s was mining, a local agricultural community also developed. New business enterprises arose to support the local agricultural community, new schools were built, and in 1893 the city was incorporated. By 1930, production in the mines had ceased; without the presence of miners, Sandy City began to clean up the saloons and brothels, and concentrate on civic improvements.

The Specialized Agriculture, Small Business, and Community Development Period, 1906-1946 is the second period of development in Sandy. The mining, smelting and small farm era was gradually replaced by a more diversified economy. The population of Sandy remained at approximately 1,500 between 1900 and 1940. During this time the city was defining itself as the political, economic, civic and social center for the southeast Salt Lake Valley. This second period of Sandy’s history laid the groundwork for the city’s eventual transformation from small town to suburb.

One of the earliest signs of community development was the creation of subdivisions from large farm parcels. During the first four decades of the twentieth century the majority of Sandy residents continued to live on farms. Most of these residents survived economically by combining subsistence farming with other occupations, primarily cottage industries and mercantilism; other farmers created large specialized agricultural enterprises such as sugar beet, poultry and dairy farms. Sandy residents also continued to work in the mining and smelter industries in nearby communities even after the smelters in Sandy closed down.

The core of the initial settlement in Sandy has several unique characteristics. The width of the residential streets are significantly smaller than most Utah towns laid out with the requisite ten-acre blocks as directed by IDS church leader Joseph Smith. The residences are primarily one-story residences with modest floor plans. The Sandy LDS Stake Recreation Hall is located in the square mile core of historic Sandy where the combination of small-scale homes and narrow streets lend a distinctive quality to the neighborhood.

By 1863, there were only four homes in the southeast area of the Salt Lake Valley. On March 2, 1883, the property on which the hall is built was purchased by the first LDS Church Bishop of Sandy Ezekial Holman, along with Emil Hartvicksen and Issac Harrison, et.al. On Septembers, 1884, they deeded the property to the Sandy LDS ward.

The first formal Sandy “ward” of the LDS church was organized in December 1882. One of the first orders of business was to build a twenty-six by forty foot wood-frame meetinghouse on the corner of 200 South and 400 East Streets. In 1893, work was begun on a new, more permanent brick meeting house; the foundation and basement walls were built and the corner stone was laid on March 27th of that year. As money was scarce, the pressed brick for the walls was not purchased until 1897, and the chapel was completed in May 1900. The building was Victorian Gothic in style; it had a steep gable roof, tall arched windows, and a tower with a pyramidal roof on the south elevation. Demolished c.1998, the building was located several yards south of the recreation hall.

In 1907, a wood frame recreation hall was built for dances, stage plays and musical programs. Brothers Byron and Lester Park were the first to use the recreation hall to show early black-and-white silent films. Horace Burkinshaw took over the job and the building became known locally as “Burk’s Theater.” The movies played on Tuesday and Thursday evenings; Horace’s wife Lottie and daughter Atha would accompany the silent films on the piano. The amusement hall was heated with wood stoves (in the late ‘teens (c.1917) the stoves caused the building to catch fire and it burned to the ground). In 1920 a new stake recreation hall was built on the same site; it was constructed of brick and had a gable roof. Beginning in 1925, Horace Burkinshaw showed “talking” movies in the new building.

The hall served the community well until the early 1930s when it was partially destroyed by fire. Sandy resident Zen Littlefield saw flames coming out of the roof of the building and immediately sounded the fire alarm (the fire station was just across the street to the west). By the time the firemen responded, it was too late to save the building; everything had burned except for the walls. Local contractor August Nelson was hired to rebuild the hall. In c. 1933, salvaging the existing walls, Nelson constructed a new bow roof. The bow shape of the roof gives the building the look of a warehouse. The building then served as meetinghouse for the Sandy Ward of the IDS Church until 1981 when a new building was constructed on another site. In 1988, the IDS Church allowed the building to be used by Laotian refugees.12 Today the building is used by the LDS Church as a recreation center.

August M. Nelson was born in Sandy on December 12, 1876, to Mads Swen and Elma (Akeson). He was an active member of the LDS church and served as a Bishop for 14 years. August married Mabel Electa Jensen in April of 1906. After marrying, August served a church mission in Sweden from 1906 to 1908. During this time Mabel was employed as a teacher for the Sandy School. August Nelson was a local contractor who was responsible for the construction of more than forty homes in Sandy. He became a prominent citizen in Sandy; at the time of his death he was president of the board of the Sandy City Bank. Nelson also served on the Sandy City Council and was secretary of two canal companies, Sandy Irrigation Co. and Sandy Canal Co. August and Mabel had three daughters (first names unknown) and four sons: M. Leo, Raymond A., Virden J. and Arval J. August passed away in November 1944, at the age of 67; Mabel in January 1948, at the age of 66.

The Sandy LDS Stake Recreation Hall meets the registration requirements as outlined in the 1997 National Register Multiple Property Documentation Form, Historic Resources of Sandy City. Built c.1920 and renovated c.1933, the recreation hall is associated with the history and development of Sandy between 1920 and 1950. Although the building has few stylistic details, what architectural features that there were are still evident. With a few exceptions, the fenestration patterns as well as the size of the openings have not been modified on the principal elevations. The Sandy LDS Stake Recreation Hall represents not only a community commitment, but also a level of prosperity in the economic development of Sandy City.

Located at 295 East 8800 South in the Historic Sandy district of Sandy, Utah

The following is from a historic marker on the house, but I think it might be talking about the house next door which also has a plaque with the same text:
The Jensen/Clark House, built c. 1921, is significant for its association with Sandy’s historical development. The Jensen/Clark House is a one-story bungalow with a full-width from porch and hipped roof with wide, overhanging eaves.
Joseph and Frances Jensen purchased a 98-foot-wide by 200 foot-deep section of land for $1,000 in September 1921. One month later, they secured a mortgage for $3,500, presumably to build the house. In April of 1933, the house was sold to Dr. Lionel and Charlotte Sorensen. Two years later, the Sorensens secured a $3,200 mortgage to construct the infirmary that is just west of the house. In 1939 the house was sold to Dr. Thomas Clark, a family physician, and his wife Charlotte. The Clark family held the property for forty-five years selling it in 1984 to James Witherspoon.

Little Cottonwood Road and Bridge – one of many New Deal Funded Projects in Utah. It was a project to built/repair the road into Little Cottonwood Canyon and the bridge over the creek and it was done by Salt Lake County and the WPA (Works Progress Administration) in 1935-1937.

Pepperwood is a community in Sandy, Utah.

I spend a lot of time in Pepperwood for work and am always impressed with the gorgeous homes. 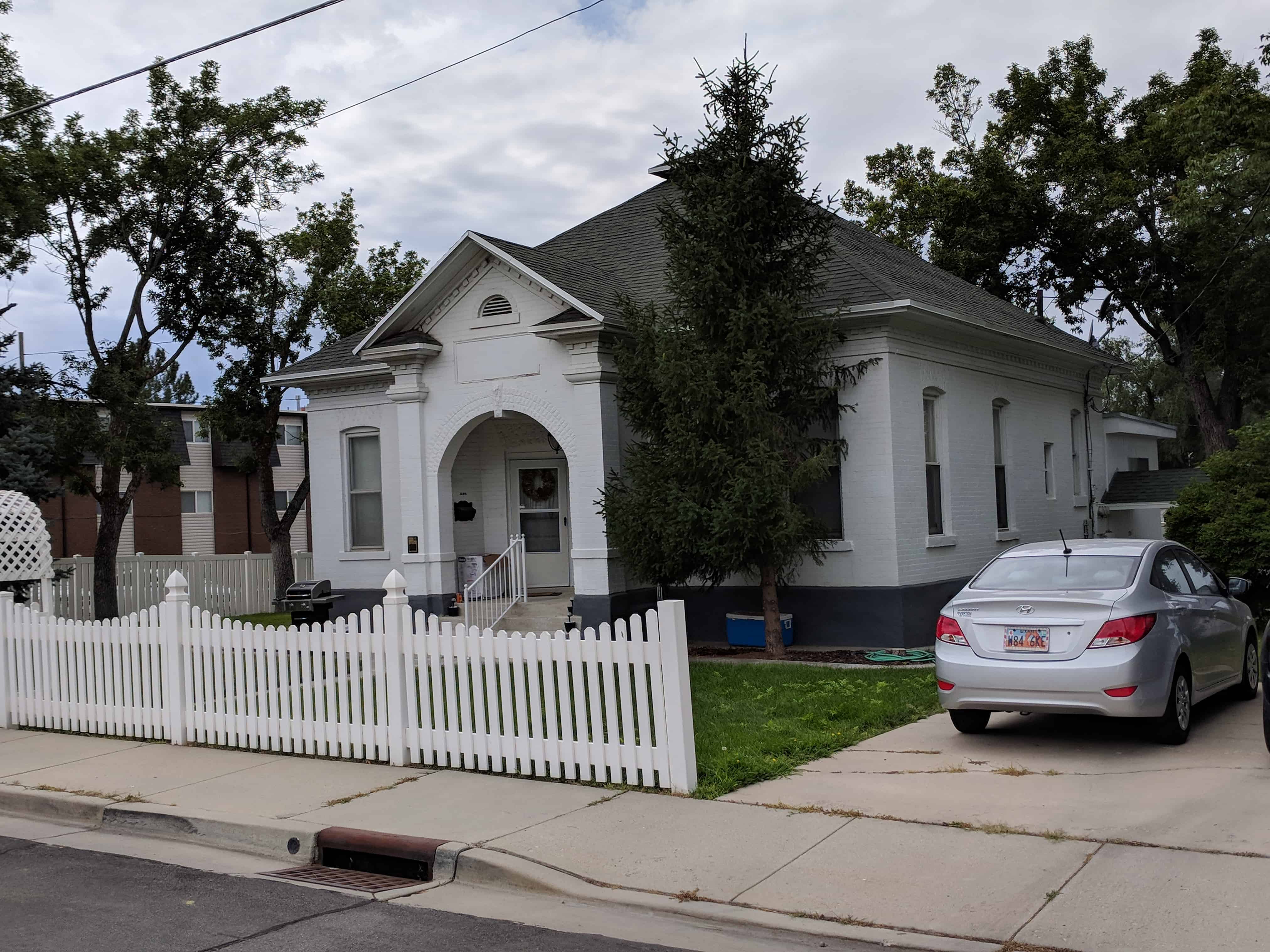 Built in 1906, the Sandy Tithing Office is one of 28 well-preserved buildings in Utah that were part of the successful “in kind” tithing system of The Church of Jesus Christ of Latter-day Saints (LDS or Mormon church) during the 1850s-1910s. Tithing offices were a vital part of almost every Mormon community, serving as local centers of trade, welfare assistance, and economic activities, and they were important as the basic units of the church-wide tithing network that centered in Salt Lake City.

Bishop William D. Kuhre was granted permission by the church to build this office and use $2000 in tithes for its construction. The building’s design was one of at least two standard plans developed at church headquarters c. 1905. Those plans were perhaps the first examples of what eventually became a policy with the LDS church for developing standard plans rather than having each ward generate its own. Other tithing offices with the same basic design as this one are seen in Manti, Richmond, Panguitch and Hyrum.

Located in the Historic Sandy area of Sandy, Utah 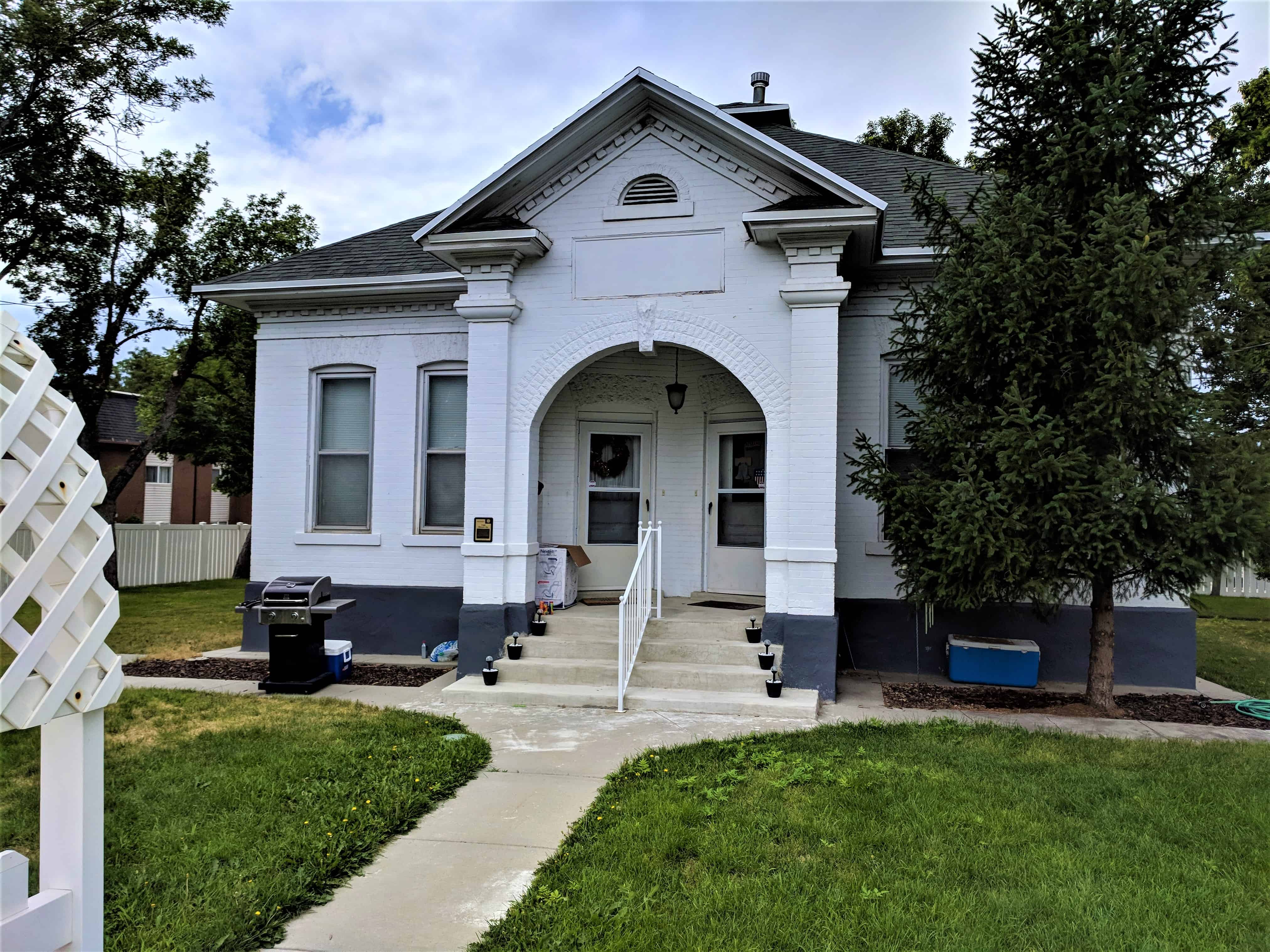 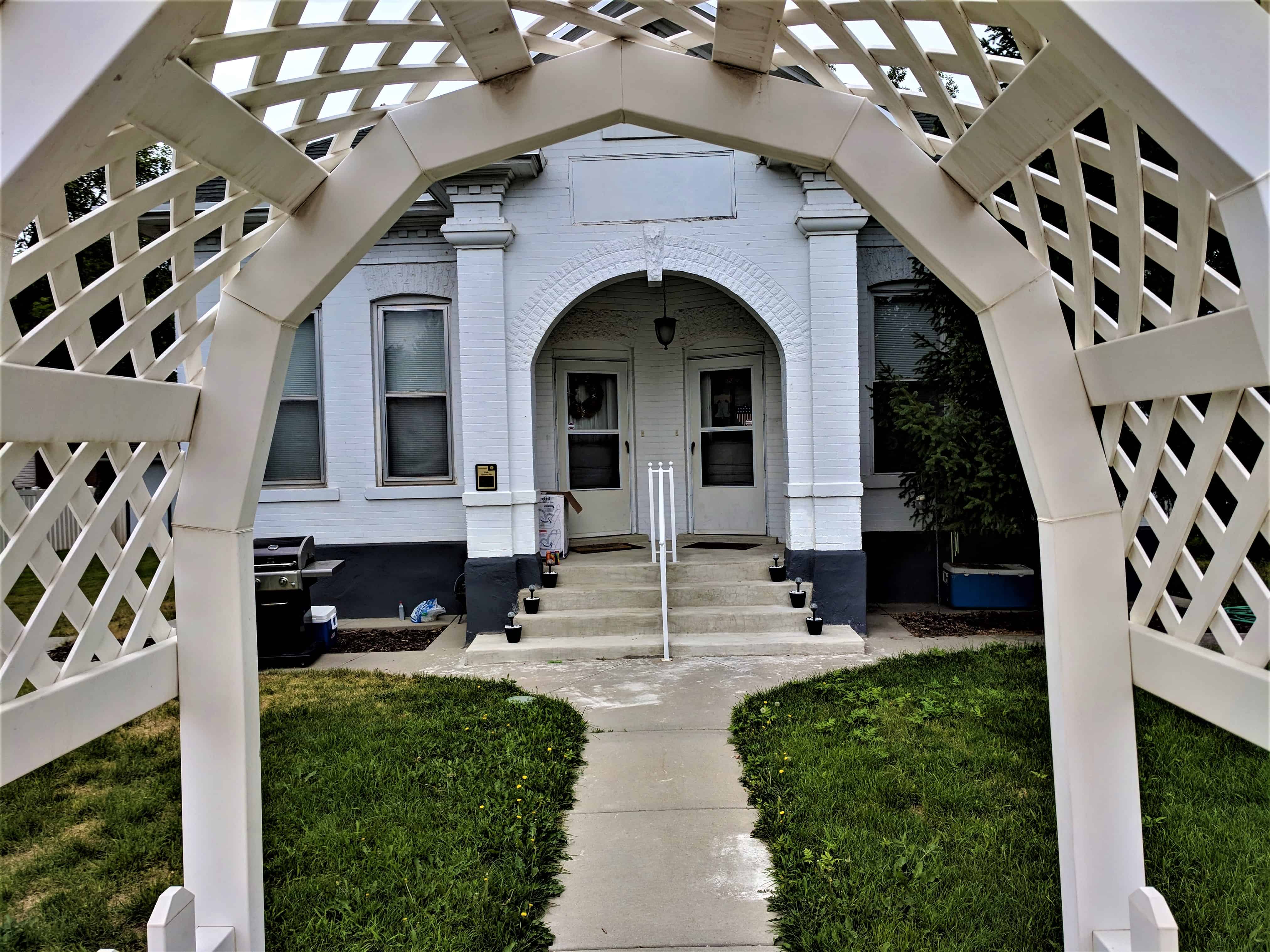 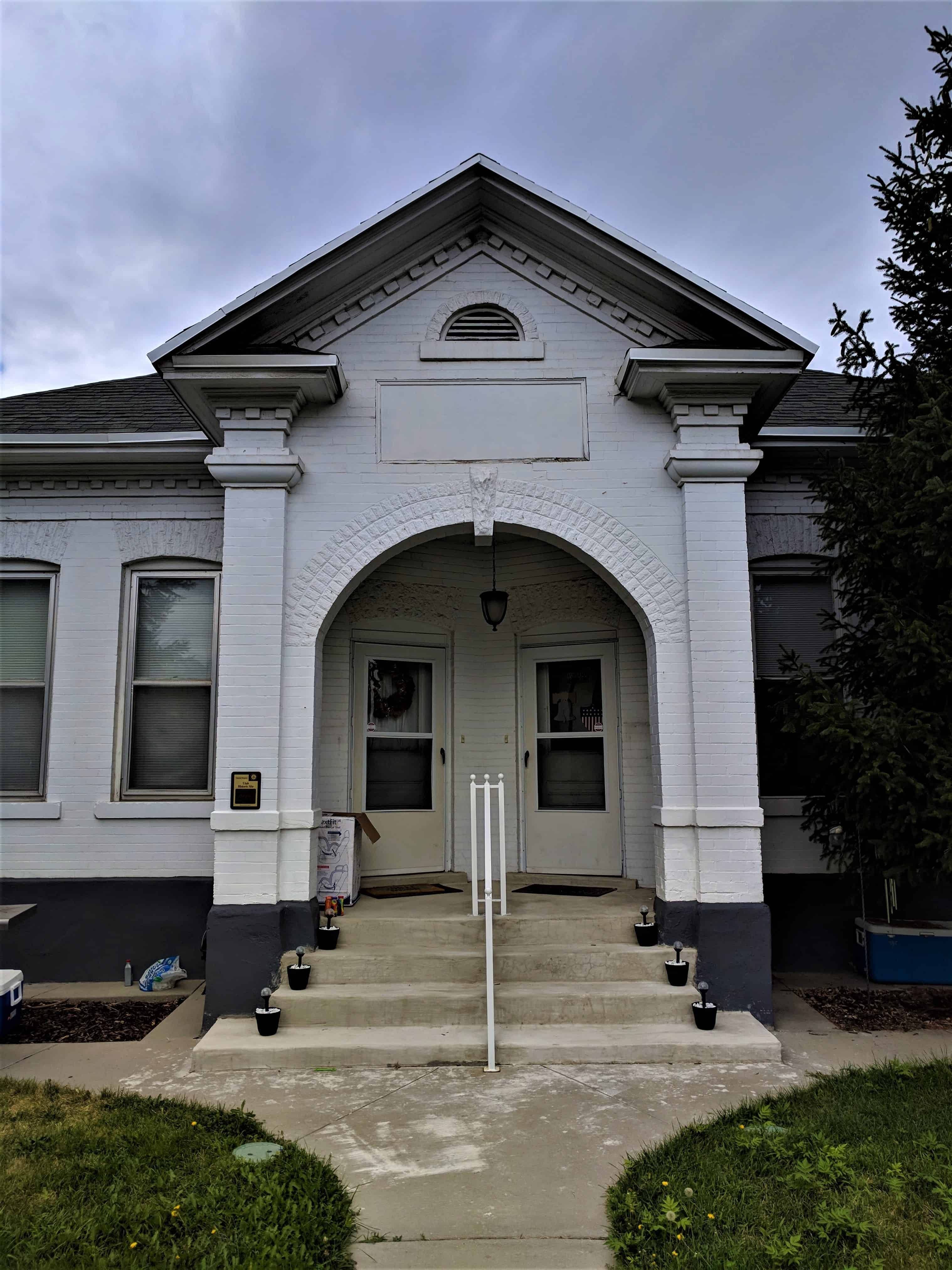 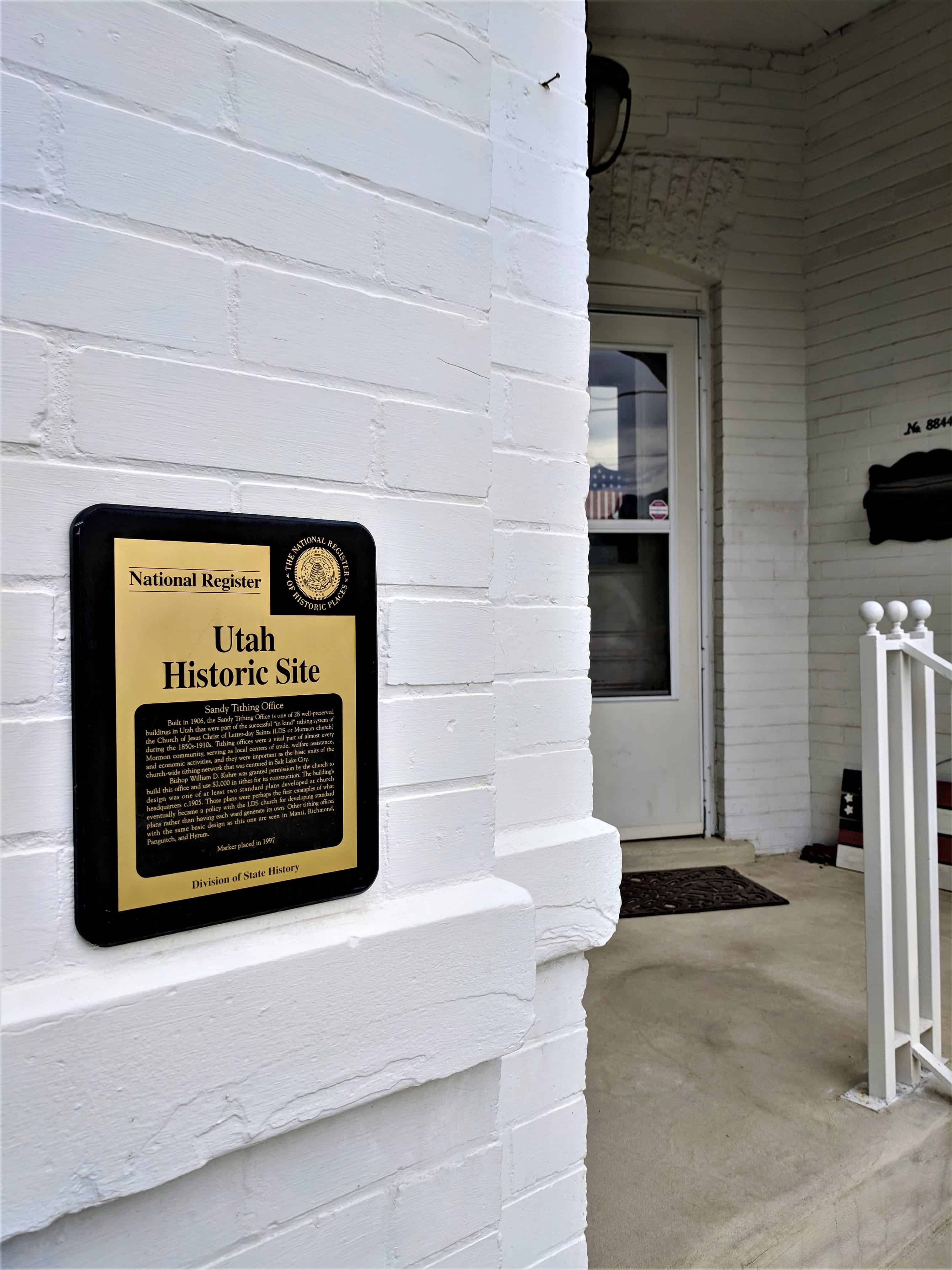 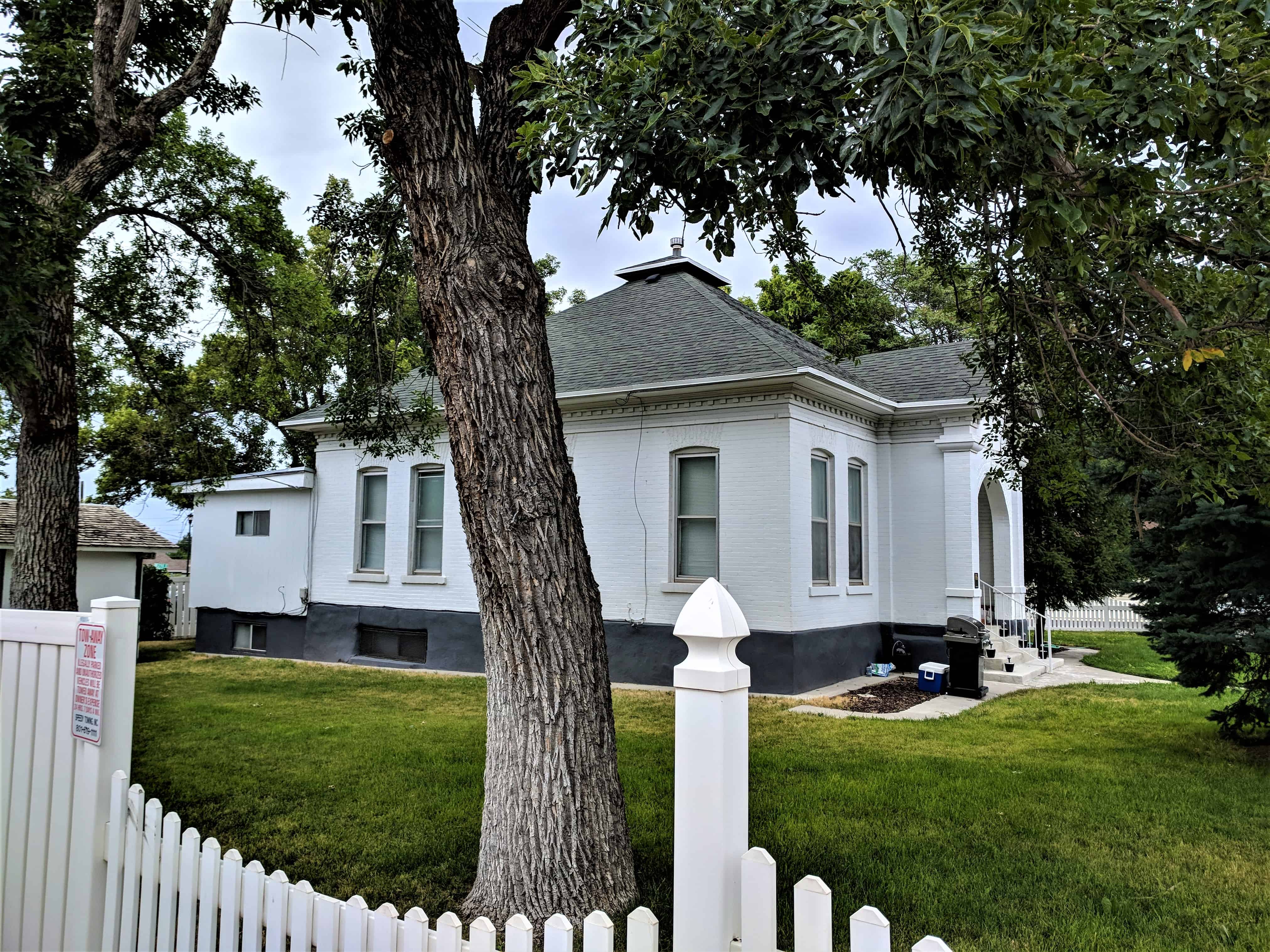 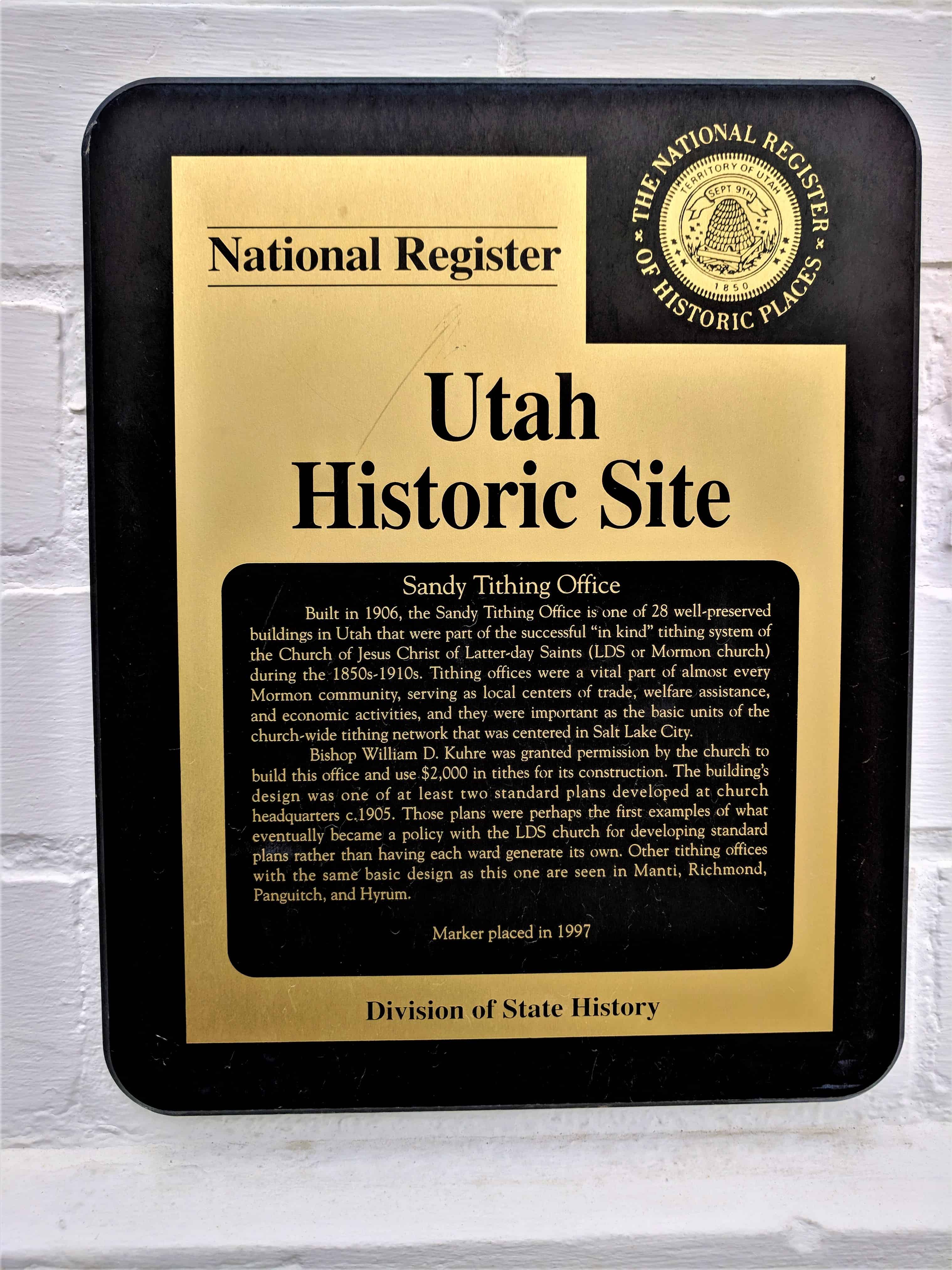