The D.U.P. Marker inside says:

This building of sawed logs, cement, and stucco was constructed by James and Mable Ellett in 1947 and operated as the Ellett Theatre.

On March 19, 1956, the Elletts deeded 30 percent interest of the building to Edwin (Ted) and Alberta Oldroyd. Together their families operated the theater until TV came into Wayne County. Until 1971, John and Maida Giles and Stanley and Hilma Brinkerhoff also worked in the business.

The Brinkerhoff family purchased the business in October 1971 and renamed it Wayne Theatre. With the help of others, they operated it until September 1994. James and Nanette Anderson purchased the business, changed the old projection machines to a one-reel operation, and improved the building. Later they obtained a grant from the Utah Historical Society and remodeled the building which is being successfully operated as a movie theater.

Bicknell is a small town along State Route 24, in Wayne County, Utah with a population of about 300 people.  Bicknell was originally called Thurber for A.K. Thurber but in 1914 Thomas W. Bicknell, a wealthy eastern author, historian, and Education Commissioner for Rhode Island, offered a thousand-volume library to any Utah town that would rename itself after him.*

Lyman was originally known as East Loa. It became a distinct place from Loa in 1893. 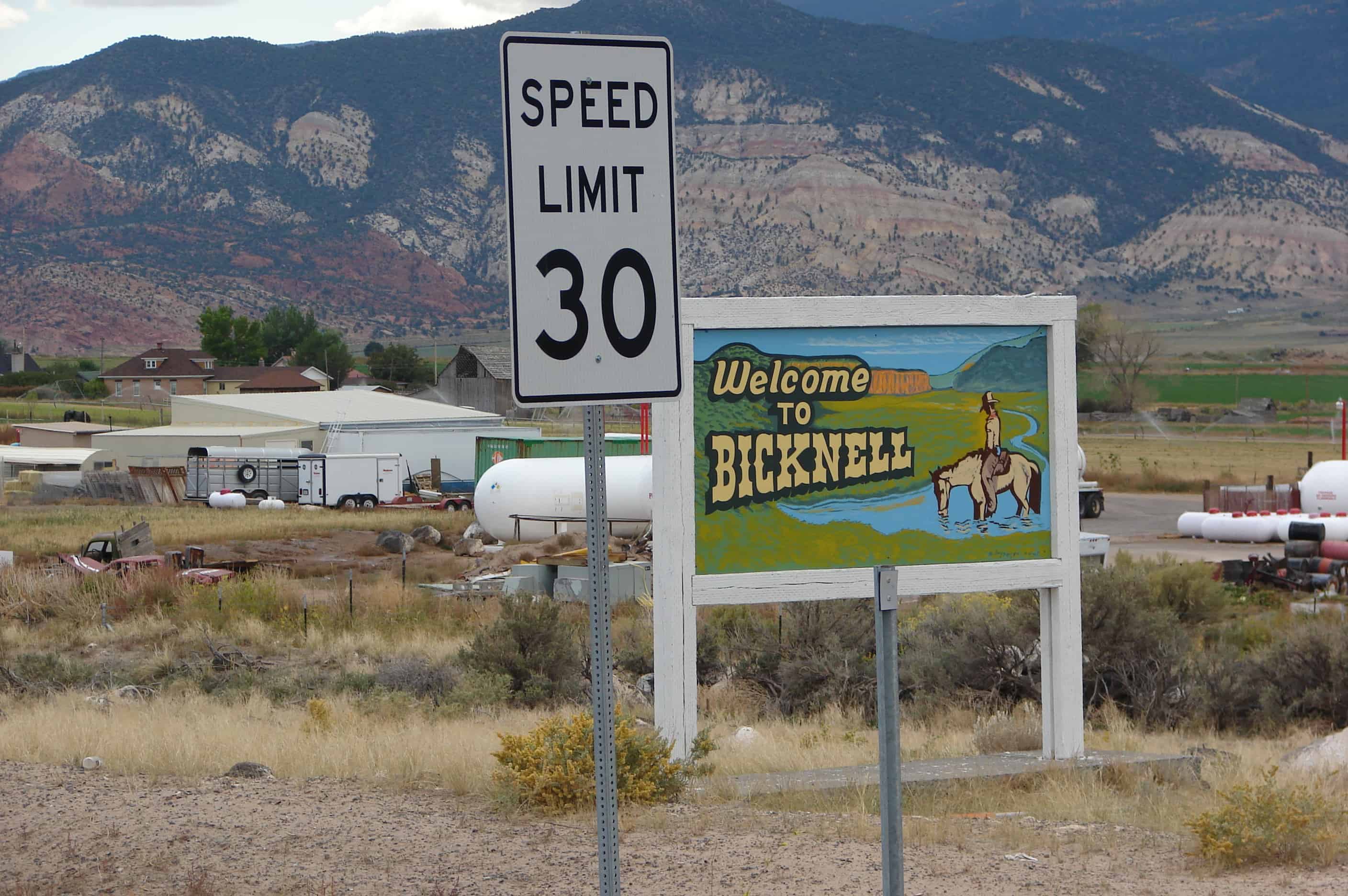 Bicknell was originally called Thurber, or “Thurber Town”, for A.K. Thurber, who in 1879 built the first house in the area. In 1897 the town moved to a new location due to sandy soil and poor water conditions.

In 1914 Thomas W. Bicknell, a wealthy eastern author, historian, and Education Commissioner for Rhode Island, offered a thousand-volume library to any Utah town that would rename itself after him. The town of Grayson also wanted the library prize, so in a compromise in 1916, Grayson took the name of Blanding, Mr. Bicknell’s wife’s maiden name, as a tribute to her parents. The two towns split the library, each receiving 500 books.

The Nielsen Grist Mill is located at the foot of the Thousand Lake Mountain on the edge of the scenic country referred to by ancient Indians as “The Land of Sleeping Rainbow.” Constructed around 1893 for Hans Peter Nielsen by his son-in-law, Niels Hansen, the mill was known as the Thurber Rolling Mills. Water for powering the mill was channeled from the Fremont River and dropped 22 feet through a wooden pope to the turbine that ran the mill.

The mill still has a double stand of Wolf Rolls and two double stands of McNalley Rolls with scalpers under each that are spouted to the various elevator legs. Sixteen elevators with five reels for flour milling are found in the mill. The Barnard and Leas dust collector and the turbine with belting still have the pulleys made of native wood, ready for use. Old models of Howe Scales, one for weighing wheat and one for weighing flour sacks, still exist. All equipment is in good shape, including the cash register. The mill produced flour, germade, shorts, and bran, each coming from individual sprouts.

farmers would receive one sack of flour for each three sacks of wheat. All 48-pound bags of flour were sewn by hand. The space between the ears was sewn with a long, sharp needle with a built-in thread cutter.

The mill made flour for the surrounding area for 40 years. Improved roads, constructed in the 1930s, spelled the beginning of the end for the Thurber Rolling Mills. Since Wayne County could not grow hard wheat, which made the best bread, it became just as east to truck in flour as hard wheat.