Built in 1906, this two-story Victorian home is one of several houses built in the Avenues by developer Anna K. Kjergard and her husband, Louis, a building contractor. Frank Birdreho, a miner in Utah and Idaho, and his wife, Pearl, bought and moved into the home in 1908. In the late 1930s the house was converted into small apartments and remained a multiple family dwelling until 1995 when an extensive renovation returned it to a single family home.

In 1902, Josiah and Harriett Longmore Burrows purchased this property and apparently expanded and remodeled the existing c. 1890 brick house into its current configuration. The Burrows, who operated a clothing store on Main Street, lived here until 1948.

Constructed in 1904, this two-story brick Victorian residence was built for Frank M. Castleton. The home is of pattern book design and some of its key architectural details include its projecting bay, stone foundation, and windows with stone sills and wide lintels. For many years the original owner of the home, Mr. Castleton, helped run the family store, Castleton Brothers General Store, which was located nearby at 740 2nd Avenue. Mr. Castleton lived in the home until his death in 1943; his widow Louise remained in the home for several more years.

This two-and-one-half story Victorian Eclectic style house was built by James D. Adams in 1891 for Clarence E. Allen, an attorney. However, Adams lived here until Allen sold the house to Lorenzo Snow, Jr., in 1900. After several short-term owners and a decade of rental use, Hermann Wullstein purchased the house in 1910. A blacksmith and master mechanic for Utah Copper Company, Wullstein lived here with his wife, Mary Neiman Wullstein, until his death in 1934.

Perhaps based on a pattern book design, this “rectangular block” house type was not uncommon during the era of Victorian styles in Utah, from about 1880 to 1910. The bay window supported on a solid arching bracket, the gable-end shingles, the front transoms with decorative border lights, and the classically detailed porch with sunburst patterns reflect the fact that Victorian Eclectic was an amalgam of styles and elements rather than a distinct style. Recently restored, this historic frame house contributes to the architectural character and continuity of the Avenues Historic District.

271 C Street is in the Avenues Historic District of Salt Lake City, Utah

Within the next 10 months the Rescue Home had 20 applicants, 5 births, 1 death, 1 marriage, 7 women placed in suitable outside homes, and 2 children were taken to the orphanage.

Neighbors on C Street objected to the Rescue Home and in Sept 1899 they petitioned the SLC Council to have the home removed and stop financial support.Thomas A. Horne, who lived just north at 277 C St, was the primary objector who complained “the women are boisterous, they make noise…and they sing indecent songs.They contaminate the children.”

In Nov 1899 the Rescue Home found another house in Sugar House area and paid 4 months rent in advance. University of Utah Professor Byron Cummings (Football & Archaeology) led the objection citing the 35 children in the neighborhood. The Rescue Home was given 3 months to vacate.

Frustrated that “respectable communities” disallowed the Rescue Home they looked for a new location in the “slums” of Commercial Street (now Regent St) but they could not find a suitable location, likely due to the high rents that the brothels and other businesses could pay.

After months of looking for a new location, the Rescue Home’s Board of Directors decided that to continue the work would be useless and the entire board resigned in Feb 1900.

A new board was established who vowed to continue the work and even secured additional locations. University of Utah Art Professor Edwin Evans led the protest against the 1458 S 1300 East location in March 1900.

Even after the Rescue Home closed itself to prostitutes and only allowed “reformable” women the neighbors protested so vigorously that the location at 51 S 800 E was also abandoned.

By Jan 1902 the whole organization was turned over to the Salvation Army who operated similar homes throughout the country with much success…. except in SLC.

The William H. Culmer home was built in 1881. William and his brothers, George and Henry, immigrated with their parents from England to America in 1867. A year later they arrived in Utah. While still a boy in England, William became good friends with Charles Dickens. In the last years of his life, William Culmer wrote an account of his life as “one of the Dickens Boys.” This account was published in 1970 under the title Billy the Cartwheeler.

In Utah, the Culmer brothers organized their own firm, G.F, Culmer
and Brothers, and were successful in several areas: Wholesale and retail
distribution of paints, oils, varnishes, window and art glass, manufacturers of mirrors and show cases; workers in art and stained glass, and
manufacturers of galvanized iron work. In addition, they were officers
and managers of the Wasatch Asphaltum Company which paved many of Salt Lake City’s streets; The Wasatch Marble Quarries, The Mountain Stone
Quarries, and The Kyune Sandstone Quarry which produced the stone for
several of Utah’s important historic sites including the Salt Lake City and County Building, the Cathedral of the Madeleine, and the First Church
of Christ Scientist building in Salt Lake City.

William Culmer died in 1939 at the age of 87. During the period of much of Utah’s industrial development, he and his brothers played an important part.

Despite the importance of William Culmer the significance of his home is that it is a prime example of Victorian architecture and, most important, the art work inside the home was executed by his nationally known brother Henry Culmer.

Henry Culmer found the painting of Seccos and stencil work to be a relaxing weekend pastime.

The Culmer Home also represents a distinct period in Utah history. Built in 1881, it represents an intermediate period of luxury home construction. It was built between the earlier Bee-Hive House and Devereaux House, built by the ecclesiastical and economic leaders of the Mormon community, and the later period of mining magnate mansions at the turn of the century built primarily by non Mormons.

Though somewhat more modest than either the early Mormon mansions or
later mining mansions, the Culmer home was built for one of Utah’s most
prosperous businessmen at a time when the polygamy issue hampered this
kind of construction for most of Utah’s devout Mormons and at a time when
the mining industry was still in its infant stage.

The 21st Ward Chapel of The Church of Jesus Christ of Latter-day Saints in the Avenues in Salt Lake. Located at 680 2nd Ave.

Constructed in 1890 for Vashi and Agnes Pease, this house is a good example of a Victorian Eclectic home. Mr. Pease worked as a U.S. Mail contractor in Salt Lake City until 1908, when he retired and moved to San Francisco. After Mr. Pease’s death in 1913, Agnes Pease continued to own this property as a rental until 1925. Then the house was sold to Charles and Rose Turton, the proprietor’s of the Lion Drug Store located at 564 Third Avenue.

The home is of an L-shaped cross-wing Victorian. It retains its historic integrity, featuring the bay window, cornice finishes, a mansard roof, and an old style transom above the front door. other original features of the house include original window glass, front porch, and an attractive inlaid ceramic tile mantelpiece. This home is a contributing structure to the Avenues Historic District.

Located at 533 11th Avenue in the Avenues in Salt Lake City, the Nelson/Beesley house is significant as the largest and best example of the Swiss Bungalow style in the Salt Lake City Avenues neighborhood and among the best in the State of Utah. Characteristics of this style romantically recall alpine chalets, and the Beesley home alludes to Swiss prototypes in its
rectangular plan, broad gable roof, height and general symmetry, and
decorative detailing. The residence served as the home of the Alvin A. Beesley family for twenty-two years. Beesley was a prominent figure in Salt Lake City business, cultural, civic and religious activities for nearly half a century. His association with the Beesley Music Company, represents the efforts of the Beesley family to promote Mormon musical values in the community.

The nomination of this residence is based upon an extensive survey of the Salt Lake City Avenues neighborhood. The Nelson/Beesley house, located in the upper Avenues, was not included in the Avenues Historic District, but was judged a significant site within the survey area based upon its architecture and historical associations.

The Swiss Bungalow style was a romantic adaptation of the Alpine chalet, and represented one of a number of variations on the early twentieth century bungalow style. The Beesley house retains the integrity of the style in its plan, roof design, and general massing.

Joseph Nelson, the original owner, had lived at 568 I Street, also in the
Avenues neighborhood, prior to his move to 533 11th Avenue- In 1926 Alvin
and Ruby Pratt Beesley were listed in directories as residing at 533 11th
Avenue, and purchased the home in 1927 from Nelson. Their tenure in the
residence dated from 1926 to 1948, the year of Ruby Beesley’s death (Alvin had died in 1940).

Alvin A. Beesley, born in Salt Lake City in 1873, was the son of Ebenezer and
Sarah Hancock Beesley. Ebenezer founded the Beesley Music Company in 1904, and both the man and the firm are considered pioneers in the Salt Lake City music field. The elder Beesley directed the Mormon Tabernacle choir from 1870 to 1885, and composed a large number of Mormon hymns. Alvin studied music under his father, as well as H.S. Kraure and C.F. Staynes; and in about 1906 became president and manager of the company. The Beesley name remains synonymous with the promotion of music and musical values, qualities important to the Mormon community. The business still functions under ownership of the Beesley family.

The activities and interests of Alvin Beesley proved influential in Salt Lake
City’s business, civic, and religious activity. In addition to his involvement with the music business, Beesley assumed the directorship and a seat on the executive board of the Hotel Utah (National Register), which opened for business in 1911. He also became an organizer, three-time president, and director for various years, of the Salt Lake local American Federation of Musicians, thus, involved in both business and labor. Alvin Beesley served as a delegate to national musician’s conventions, and befriended Samuel Gompers, president of the American Federation of Labor.

From 1933 to 1935 he served as a Salt Lake County Commissioner, heading the finance department. A member and activist of several civic groups, including the Chamber of Commerce, Rotarians, and Boy Scouts,. Beesley served in numerous religious positions for the Mormon church, particularly as chorister of the Salt Lake Stake from 1904 to 1930.

Alvin and Ruby Pratt Beesley resided in the house until their deaths. Mrs.
Beesley was the daughter of Mormon pioneer Orson Pratt, and married Alvin in She died in 1948, following Alvin’s death in 1940.

Built in 1918 by Joseph Nelson, an early day plumbing contractor. The Joseph Nelson house is architecturally significant as one of the best examples in Utah of the Swiss Bungalow style. Situated in the Avenues neighborhood, this house recalls an Alpine Chalet with decorative detailing. For many years it was owned by members of the Alvin A. Beesley family who were associated with the Beesley Music Company. In 1957 the house became the residence of W.E. Hess, M.D. and family. 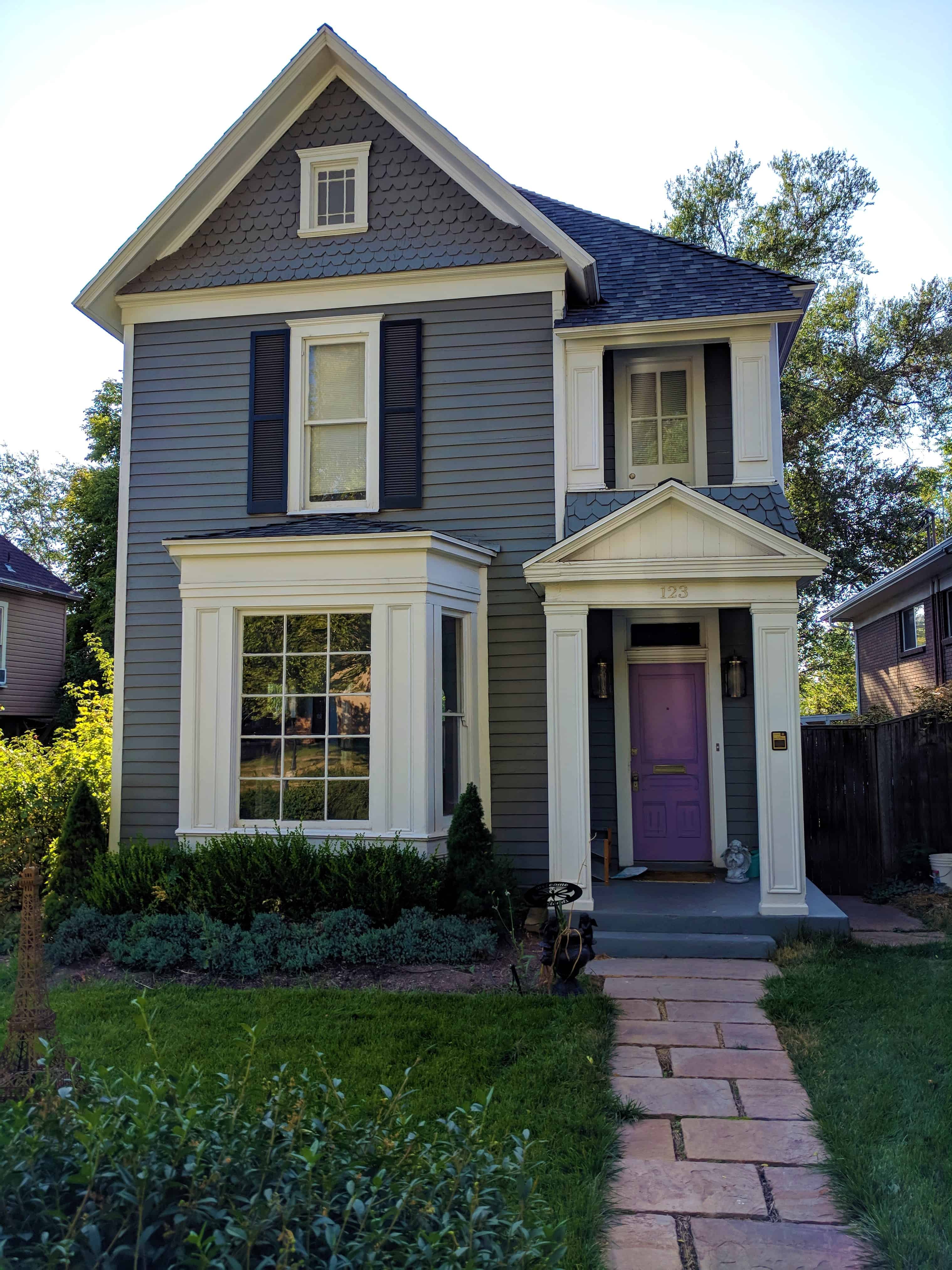 This house was built in 1890 at a cost of $2,500 and is typical of Victorian houses built in the Avenues in the late 19th century.  The first resident was Charles H. Brink, manager of Joslin and Park Jewelers, one of the earliest such businesses in Salt Lake City.  Subsequent owners include stockman Howard H. Lawson, 1906-21, and cabinetmaker Peter Moss, 1927-early 1940s. 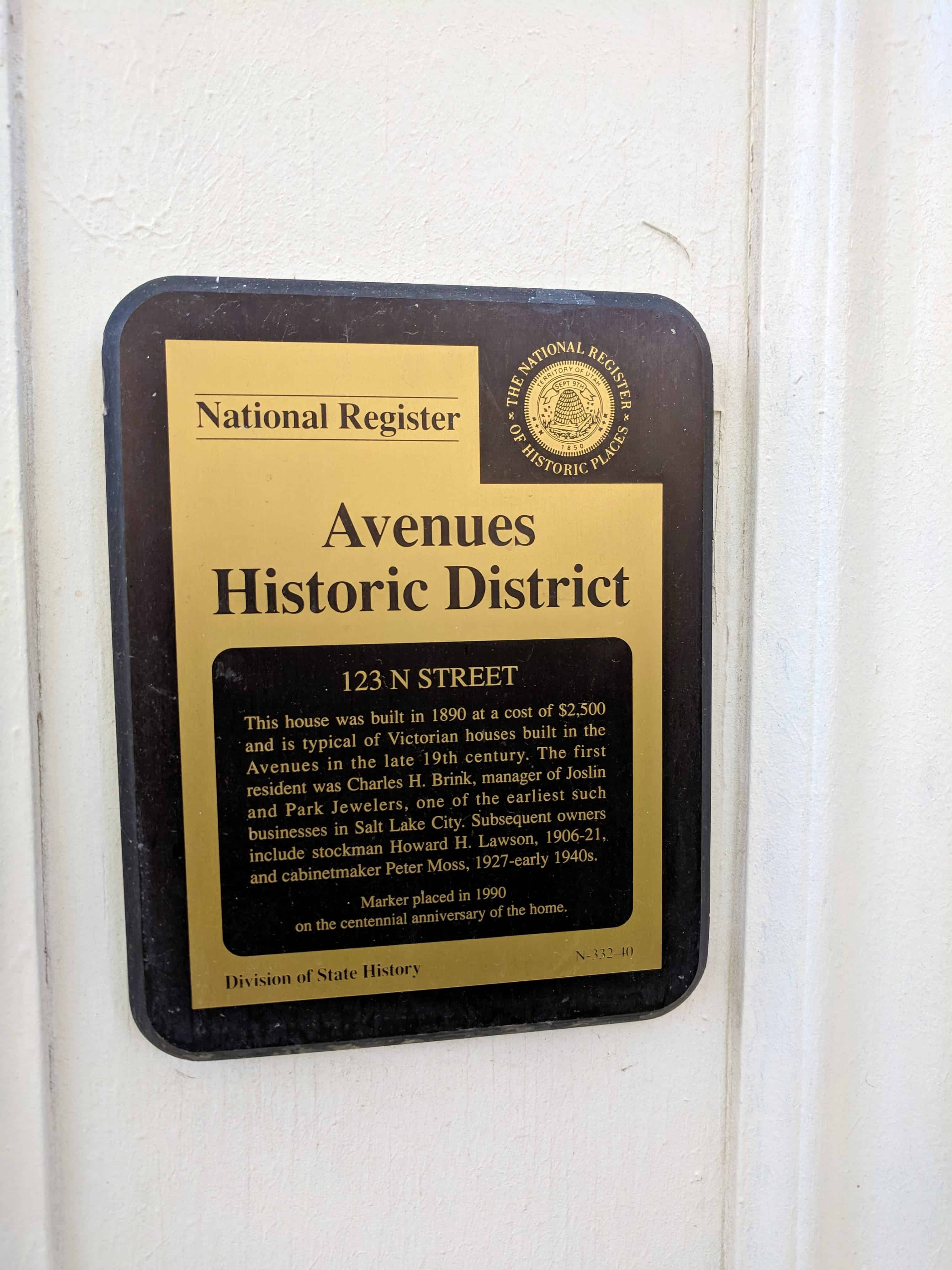