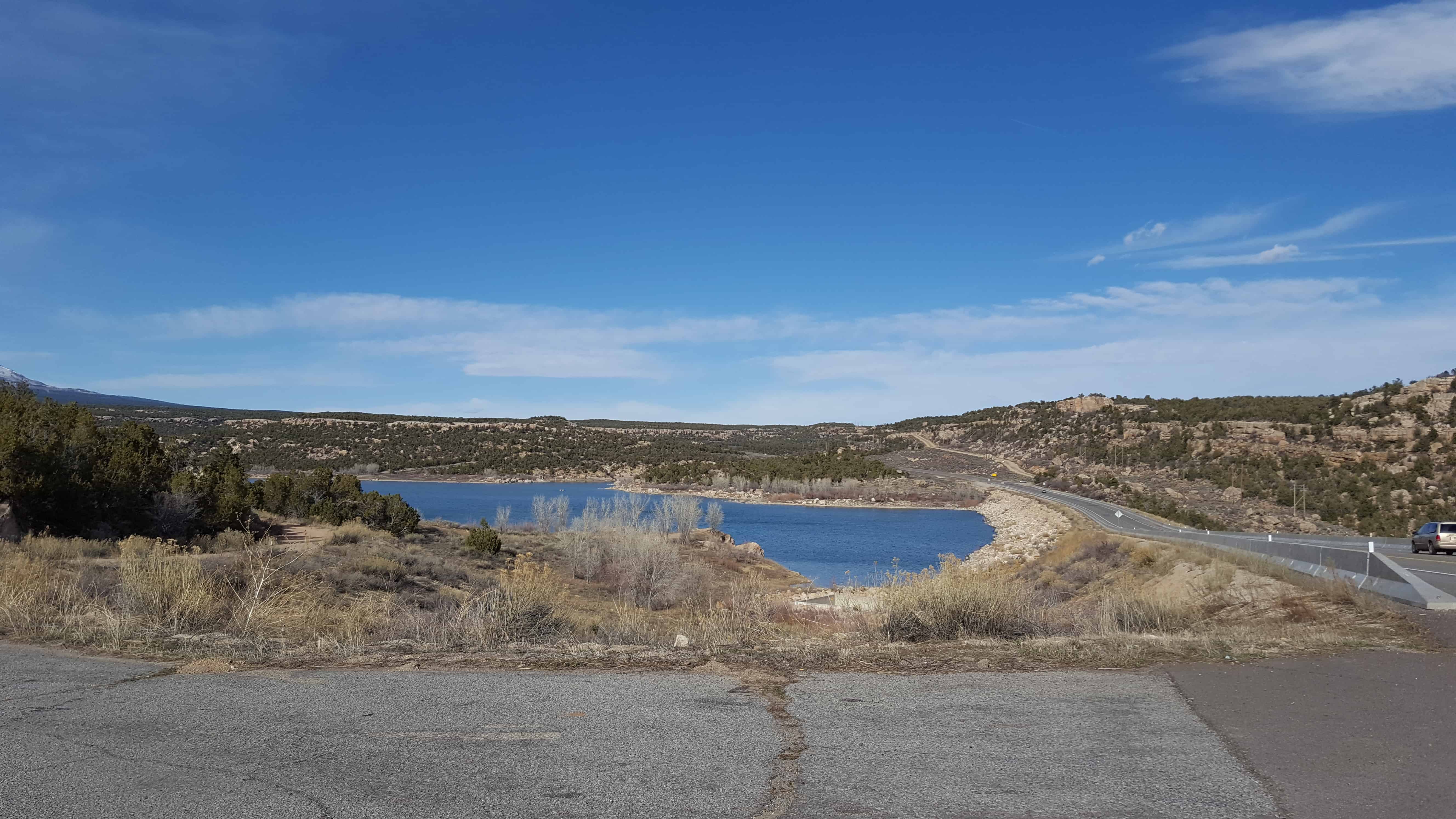 Butler Wash Ruin is a cliff dwelling that was built and occupied by the Ancestral Puebloans, sometimes known as Anasazi, in about 1200 AD. Parts of the site has been stabilized and reconstructed, but most of it remains as it was found in the 1800s. There are habitation, storage and ceremonial structures, including four kivas.  This ruin is located in a side canyon of Butler Wash, on the east side of Comb Ridge.

A BLM trail to the site winds its way across slickrock and washes to reach an overlook of the cliff dwelling. Round trip hiking distance is 1 mile and takes approximately a half hour. The difficulty is moderate. An interpretive sign is located at the overlook. Ample parking and a restroom is provided. There is no water at this site, and desert temperatures can be extremely hot and dry. Plan ahead and be prepared. Bring appropriate clothing and lots of water when visiting this site.

The hike from the parking lot to the overlook is an easy one, maybe half a mile to three-quarters of a mile.  It was hot and I was out of shape so I whined a bit more than needed.  Actually going to the ruins took a bit more effort, working the way south from the overlook down into the canyon and then a little rock climbing and scrambling to get up on the cliff over to the side of the ruins, then straight over.

Travelers along U.S. Highway 191 in Southwestern Utah are amazed to discover this historic 5,000 square foot home which began taking shape almost a century ago by the Christensen family. What began as a small alcove for the young Christensen boys to sleep in at night grew into a man-made engineering marvel 20 years in the making. A fireplace with a 65′ chimney,14 rooms arranged around huge pillars and a deep bathtub built into the rock delight visitors who visit this most unusual home in the dessert. Original furnishings, Alberta’s paintings, Gladys’s doll collection and many of the tools used to create this home remind you of the past.

In a 12 year period Albert excavated 50,000 cubic feet of sandstone from the rock. During this time he completed his famous painting Sermon on the Mount and his sculpture of Franklin D. Roosevelt on the face of the rock above his home.

When Albert died in 1957, the home was not complete. Gladys’s in keeping with his wishes & lifelong dreams continued to develop the property, opening a gift shop and giving tours of her home until she passed away in 1974. Gladys is laid to rest next to Albert in a small cove within the rock near the home.(*)

This location has been a travelers’ resting place for two centuries. Beginning in 1829, horse teams on the Old Spanish Trail between Santa Fe and California stopped here for the abundant spring water and shade. After the settlement of Mormon Pioneers, stage coaches traveling between Moab and Monticello stayed here overnight.

Early in the 20th century, the Christensen family of Monticello homesteaded 80 acres here. They blasted out a small cave in the rock where cowboys camped as they drove their stock toward the Colorado River. In 1945, brothers Leo and Albert Christensen expanded the cave and opened “American’s most unique dining room.” The Hole N” The Rock Diner was a watering hole for uranium miners and car tourists until 1955.

The Christensens continued to excavate the cave until it reached its current size of 5000 square feet. Take a ten-minute guided tour of this unique and spectacular 14-room home as millions have done since 1957.

Once the smallest temple of the Church, the temple was expanded an additional 4,000 square feet.

The Monticello Utah Temple is the 53rd operating temple of The Church of Jesus Christ of Latter-day Saints (LDS Church). In October 1997, LDS Church president Gordon B. Hinckley announced the building of smaller Latter-day Saint temples throughout the world. The first of these smaller temples was to be built in Monticello, Utah. Less than one year after the announcement, the Monticello Utah Temple was dedicated on July 26, 1998.

The Monticello Utah Temple serves nearly 13,000 church members in Blanding, Moab, and Monticello, Utah areas and members from Durango, Colorado and Grand Junction, Colorado.  Located at the base of the Abajo Mountains, the temple’s exterior is finished in a marble called Noah’s Crème. Thirteen thousand tiles used on the temple were evaluated carefully to make sure they blended with each other for a uniform effect. The Monticello Utah Temple has a total floor area of 11,225 square feet, two ordinance rooms, and two sealing rooms. 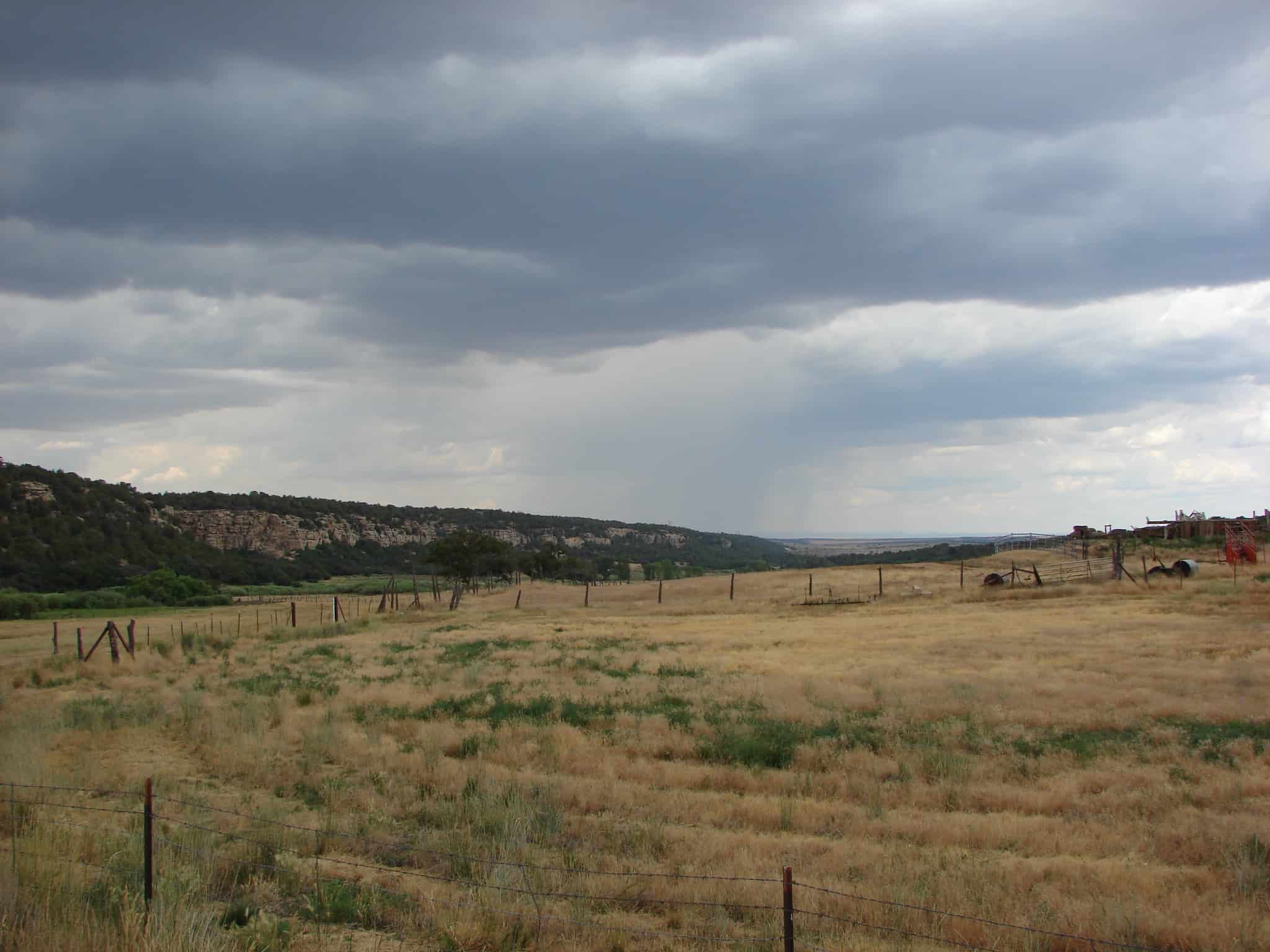 The historic marker alongside the highway reads:

The oldest Mormon settlement in the Blue Mountain Region was first known as South Montezuma. Later the name was changed to Verdure after the lush green growth along the stream bed. Verdure was settled by men of the Blue Mountain Mission March 11, 1887, under the direction of Pres. Francis A. Hammond of the San Juan Stake. He called George A. Adams, Frederick I. Jones, Parley R. Butt and Charles E. Walton to establish a new settlement at North Montezuma, later named Monticello. They first set up camp at Verdure to prepare for a permanent settlement at Monticello, six miles to the north.

When company members moved on to Monticello in 1888 the Adams and Butt families remained at Verdure. By 1894 they were joined by the Alvin Decker, Willard Butt, Lingo Christensen, R.P. Hott and Francis Nielson families. Nielson operated a store and a school out of his log home, the first church met in the Decker home, and in 1893 a post office was installed in the Adams home.

Verdure was a peaceful frontier village where cattle, farming and cheese-making were the main occupations. Gradually the settlers moved to Monticello. 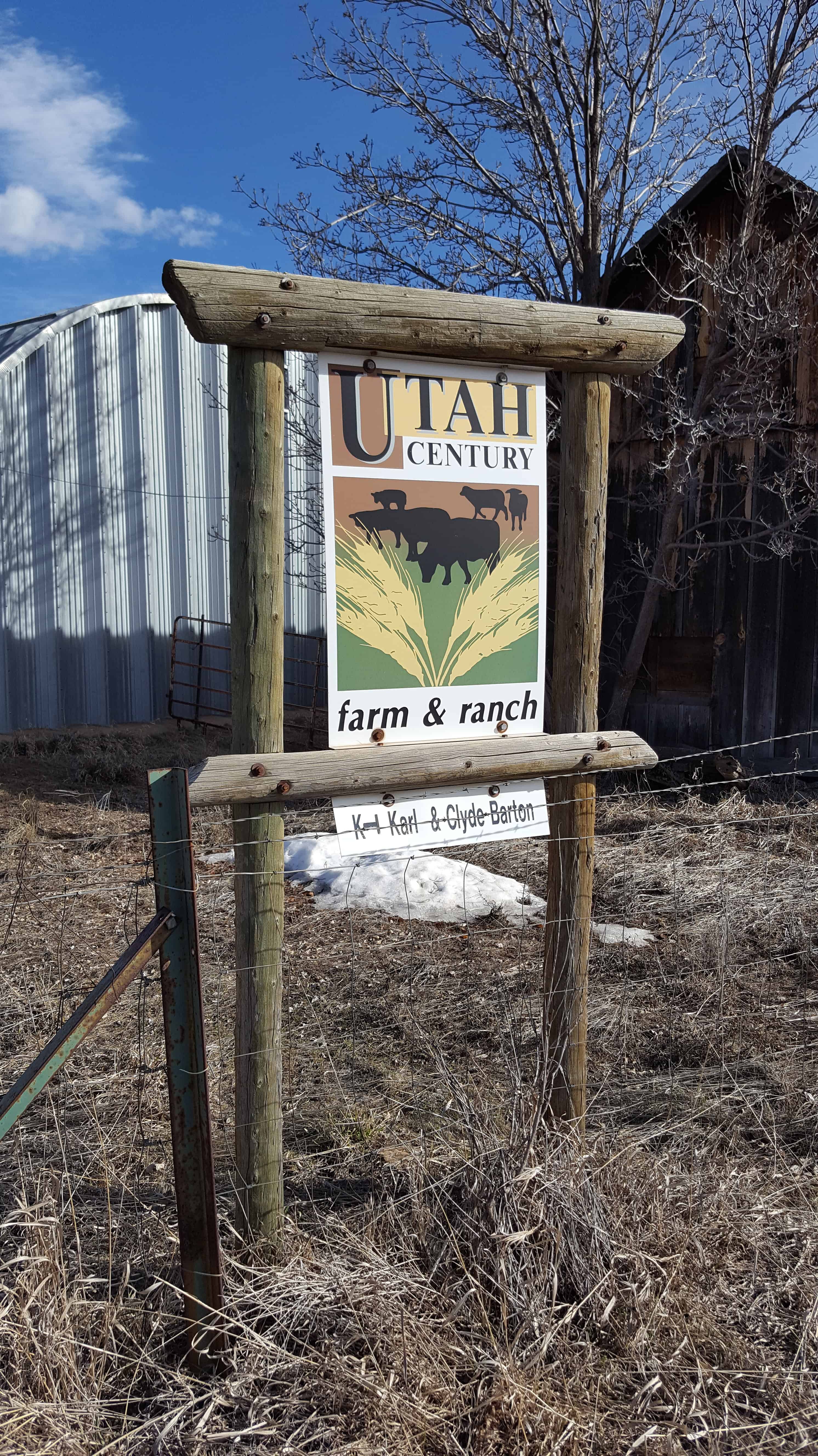 March 12, 1887 Frederick I. Jones, Farley R. Butt, Charles E. Walton and George A. Adams came here to start the L.D.S. Blue Mountain Mission. After their families arrived they camped at Verdure the first summer. In 1866 the families of M. Peterson, W.E. Hyde, Wm. Adams, and J.E. Rogerson came. This square was the activity center with a sports area, bowery, log relief society room and a co-op store. A log house built in 1888 stood 125 ft. west and was used for church, school and recreation.

This is Daughters of Utah Pioneers historic marker #212 located at 165 South Main Street in Monticello, Utah

The city of Monticello rests at the foot of Blue Mountain on the Great Sage Plain of southeastern Utah. Local springs east and west of its present location offered water to passersby, who gave them such names as Piute Springs, Soldier’s Spring, and Vega (Spanish for “fertile plain”) Creek.

In March 1886 Francis A. Hammond, LDS stake president of San Juan County, sent an exploration party from Bluff to determine likely sites for towns close to the mountain and its water. The south and north forks of Montezuma Canyon provided real possibilities, yet the general region was already utilized by Edmund and Harold Carlisles’ Kansas and New Mexico Cattle and Land Company, located a few miles north of Monticello, and the L.C. outfit, headquartered on the South Fork of Montezuma Creek. Undaunted, Hammond called Frederic I. Jones and four other men to start planting crops, laying out a townsite, and surveying an irrigation ditch. By the first part of July 1887 the men had their tasks well under way and had joined in a conflict with the cowboys of the Carlisle outfit that would continue for approximately the next eight years. Warning shots, heated disputes, and legal wrangling were all part of this tension as each group tried to control access to the area’s water. Homesites established at Verdure, on the South Fork of Montezuma Creek, were not free of conflict either, with cowboys as well as Ute Indians adding to the stress.

The Mormons claimed all of the water in the South Fork as well as three-fourths of it from the North Fork, and they learned from lawyers that the Carlisles had very little legal title to any of it. Since more water was available on the South Fork, the men there raised an initial crop of wheat, oats, and potatoes, and they experimented with both irrigation and dry-farming agriculture. In the spring of 1888 the settlers returned and undertook the construction of a town that was known as both North Montezuma and Hammond until it took the name Monticello in honor of Thomas Jefferson’s estate.

To bolster this new colony, Hammond called twenty additional men from Moab, Bluff, and Mancos, Colorado. Together they fenced 320 acres, established crude homes from wagon boxes and tents, and started the arduous task of hauling wood from the mountains. Private homes and a meetinghouse arose from the sagebrush flats, while the irrigation ditch, built by the newly incorporated Blue Mountain Irrigation Company, snaked its way across the flats to water the crops.

A rudimentary livestock and agricultural economy blossomed. Most of what was not home grown or locally made came from the stores of either Moab (via the railroad running through Thompson) or from the towns of Cortez, Mancos, and Durango, Colorado. Wagon freighting to distant markets provided an extra income for locals, but created a shortage of manpower for the women and children remaining at home. In 1903 the Utah State Agricultural College in Logan established an experimental station in Verdure, and for thirteen years the station tested various types of dry-farming techniques and products suitable to the climate.

This information, along with the passage in 1909 of the Enlarged Homestead Act that provided 320 acres of non-irrigatable land for a small price, encouraged an explosion of new farms carved out of the sagebrush lands north and east of Monticello. The establishment of small communities comprised of homesteaders–Boulder (1910), Lockerby (1912), Ucola (1913), Summit Point (1915), Cedar Point (1916), Horsehead (1916), Ginger Hill (1917), Urado (1918), and Torb (1919)–supported the economic growth of the larger town like the spokes of a wheel linked to a hub. Even after the economic boom of World War I and during the Great Depression of the 1930s, farming remained a major local occupation.

The prosperity of the town ebbed and flowed. Monticello became the county seat in 1895 and in 1910 was incorporated as a city. A brick schoolhouse erected in 1897 replaced the log cabin school built nine years before. The Blue Mountain Irrigation Company accepted bids for a combined water and power system that came to fruition in 1917, supplying the 250-member community with twenty-four hour service. The town welcomed its first phone lines in 1906, tying communications in to Colorado circuits; two years later, Monticello connected with Moab. In 1915 Oscar McConkie established the San Juan Record, the county newspaper, in Monticello where it remains to this day.

World War II brought further changes. The Vanadium Corporation of America (VCA) selected Monticello as a site for a wartime vanadium processing mill. It employed 200 workers until it closed in 1946, only to reopen in 1949 as a converted vanadium and uranium plant. During the 1950s, the mill processed large amounts of ore taken from the canyons of southeastern Utah; however, in 1960, the Atomic Energy Commission closed the plant permanently. The government conducted a tailings cleanup project in the 1990s to remove any hazardous waste from the site.

Today, Monticello still serves as the county seat, is home to the school-district offices, has an eighty-prisoner correctional facility and the district court, and it has a growing tourist industry derived from Canyonlands National Park and traffic coming from southwestern Colorado. According to the 1990 census, it has a population of 1,806, which includes a small Hispanic community, and is the second largest city in San Juan County.