The old 29th Ward Chapel of The Church of Jesus Christ of Latter-day Saints, located at 1102 W 400 North in Salt Lake City, Utah.

The historic Pine Valley Chapel in Pine Valley, Utah is the oldest continuously used chapel in The Church of Jesus Christ of Latter-day Saints and is a gorgeous building. Ebenezer Bryce had the job of building it and is said to have said that he didn’t know how to build a church, but he knew how to build a ship so he build it as an upside-down ship.

They have about 125 members in the branch with about 60 visitors every week who come to experience church in such a classic old building and 400-600 visitors on Memorial Day weekend’s Sunday so they hold services outside on the lawn. Tours are free and open.

The pews and other woodwork and some cement work was painted to look like oak wood, the painter even hid his name is the grain in some of the pews.

The same sun, moon and stars shone over these everlasting hills when old Lake Bonneville’s waters reached midway up these mountains. Later, native American hunters roamed these lands which they called Woebequachee. Here they fished Pe-Ogway (Bear River) and streams draining into the salty sea they named Onaba.

Pioneers came to Deseret in 1847 and went north among the Shoshone Indians. By 1852 Willow Creek, 3 Mile Creek, Box Elder and Call’s Fort were established as new settlements. Many trestles and miles of steel helped to span and conquer these new lands. The Golden Spike driven on 10 May 1869 at Promontory, brought a hive of industry to the west.

Brigham City was one of the most prosperous and progressive settlements in this territory. During the 1870-80 era, the city realized a high point of achievement in living the United Order. Brigham City experienced a healthy expansion as choice people, fruit and crops made the desert blossom like a rose. And now, in more recent days, America has reached the moon and other galaxies, inspired by thoughts and actions of people in the Brigham City area. The sacrifice, commitment and charity of all generations of those who lived, loved and died here is symbolized and honored by this building. May this dancing fire of the human spirit continually burn within us and renew our faith and love for one another.

In 1961 the Box Elder Chapter of the Sons of Utah Pioneers sold the Community Center property to Brigham City Corporation, then donated $10,000 to Box Elder County Commissioners for the purchase of this site for a nursing home. Besides the Sons of Utah Pioneers, countless others have given time, talent and patience to develop this facility known as Pioneer Care Center.

The old chapel that was built in 1904 and was previously used for the 15th Ward of the Church of Jesus Christ of Latter-day Saints in Salt Lake City.

Built in 1900 and dedicated in 1906, The addition to the west of the chapel is a cultural hall and was built in 1931. The church sold the chapel in the late sixties when the ward was discontinued and it was merged into the 34th ward. (thank you Samuel Roberts)

For other historic churches in Salt Lake City visit this page.

When first organized, the 15th Ward extended from South Temple to 3rd South streets and from 2nd to 5th West streets

Also from the old 15th Ward: 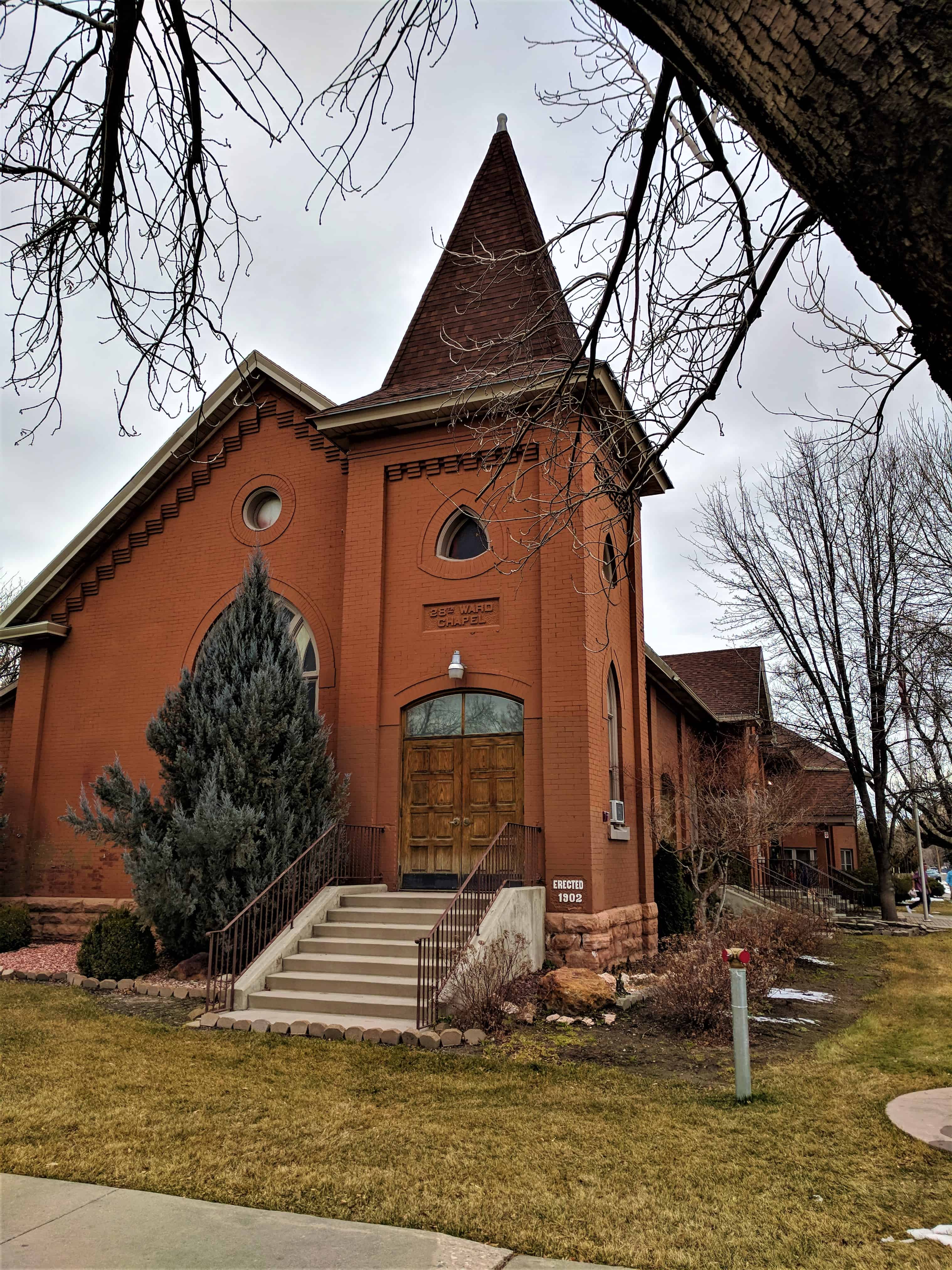 The old chapel the was previously used for the 28th Ward of the Church of Jesus Christ of Latter-day Saints in Salt Lake City.

For other historic churches in Salt Lake City visit this page. 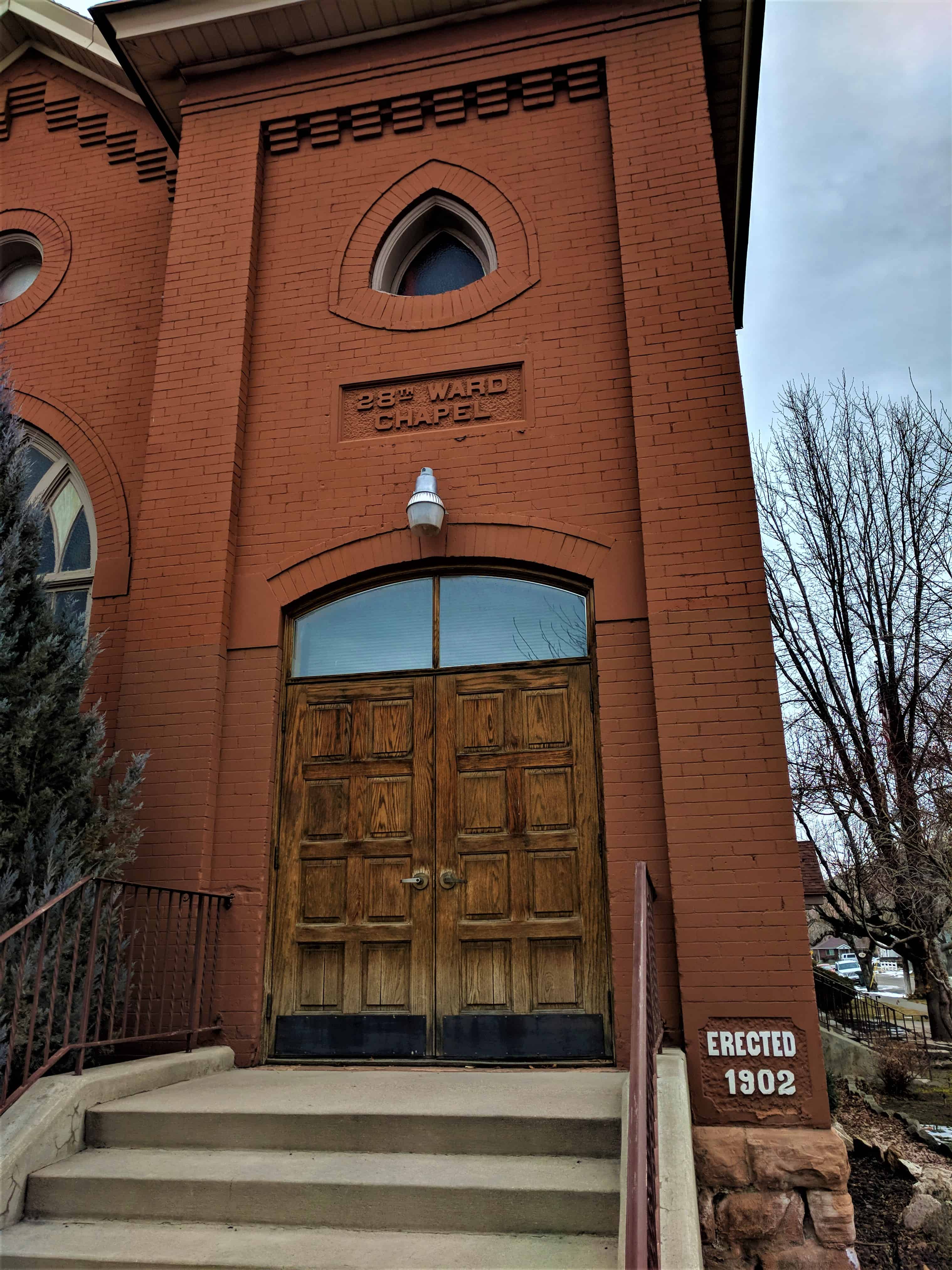 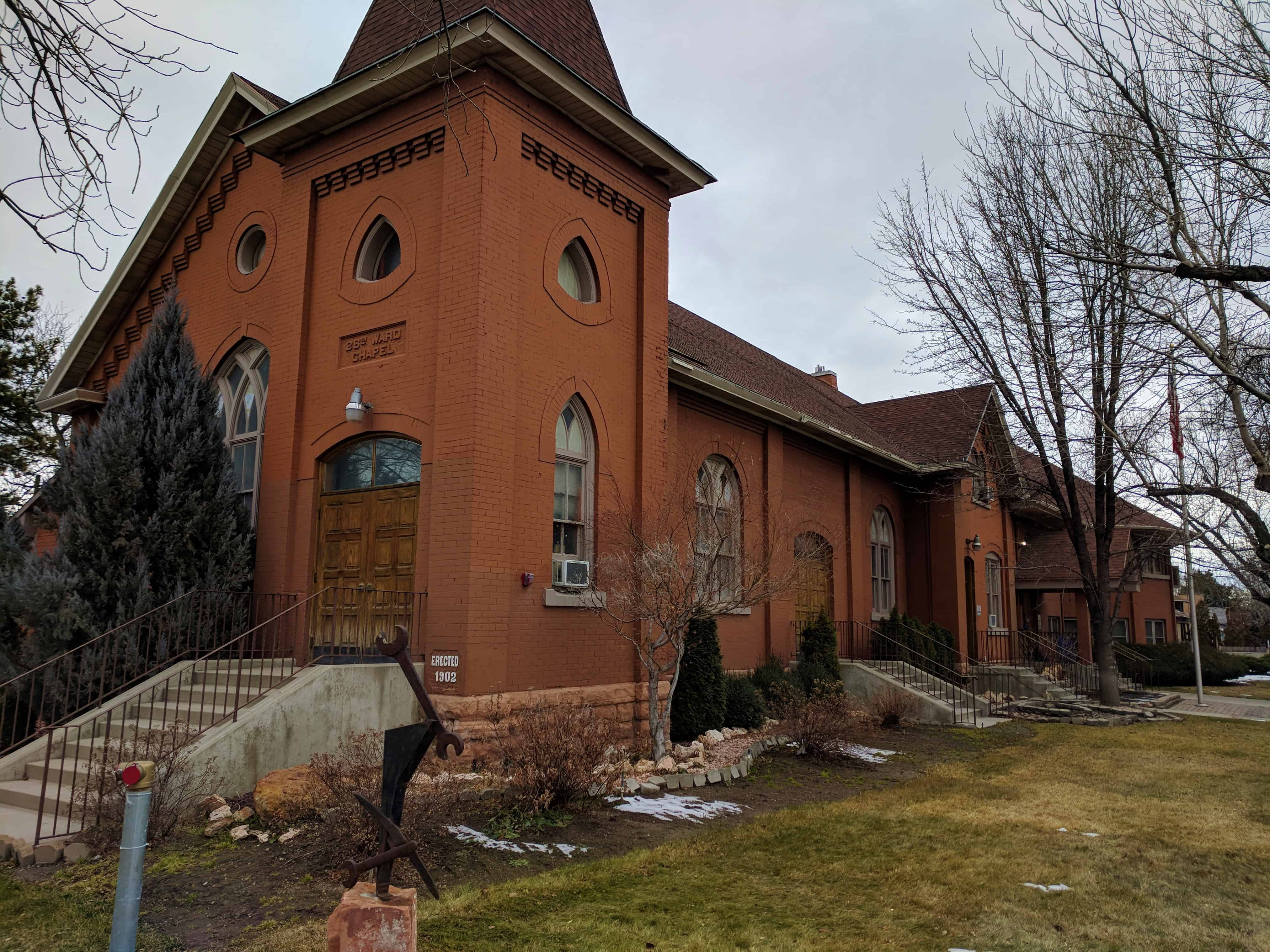 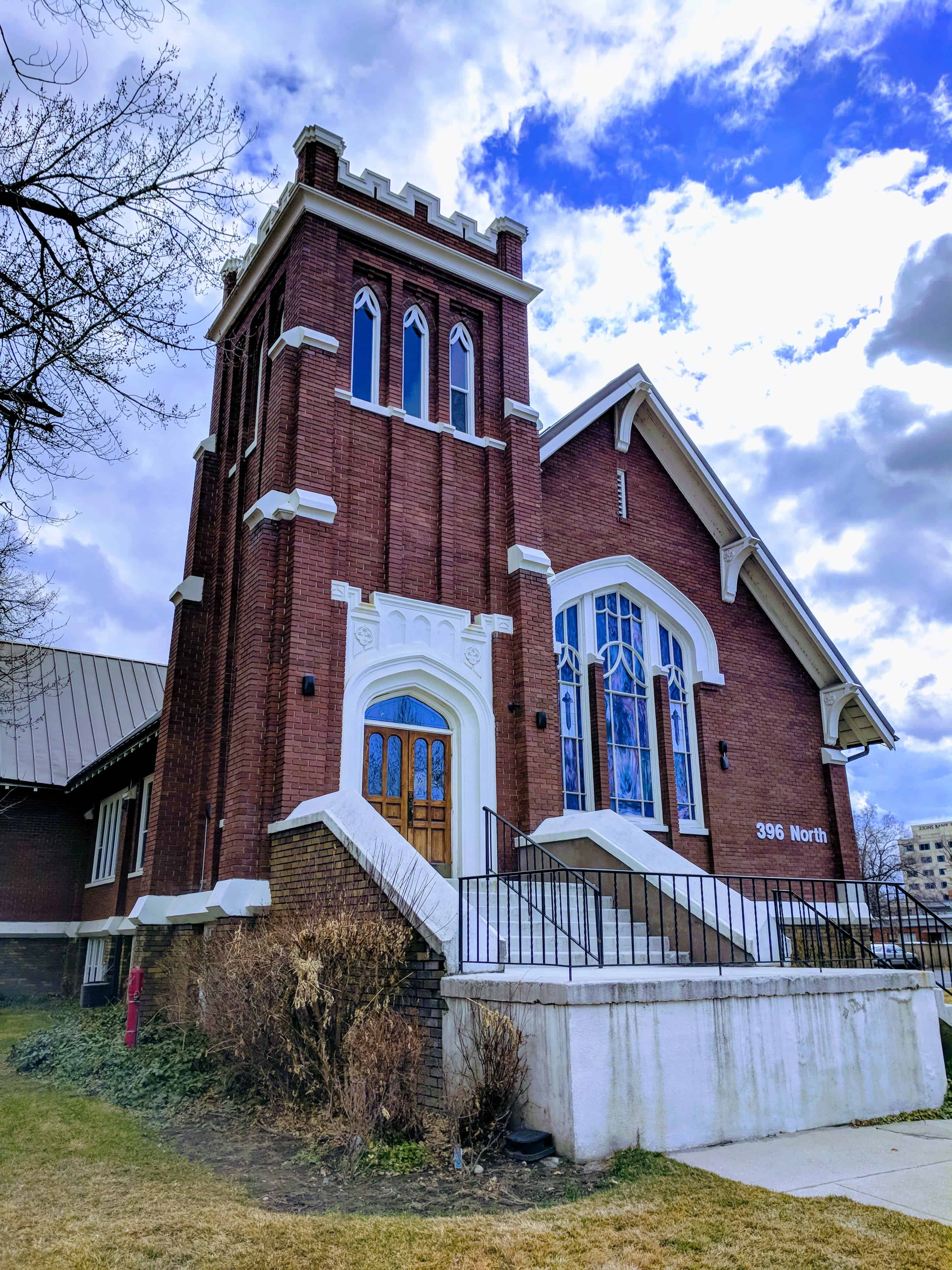 Located at 396 North 100 West in Provo and built 1925, the Provo 4th Ward Building stands out as another gorgeous formal chapel.

It is now an apartment building, but was in the past started being built in 1915, but stopped because of World War I. The saints met in the basement. After the war they continued building and finally dedicated it in 1925. Church President Heber J. Grant came from Salt Lake City to dedicate the building.  They even had door prizes at the dedication. They included a lifetime Schaeffer Pen set, a 1925 Chevrolet car and a live bull. 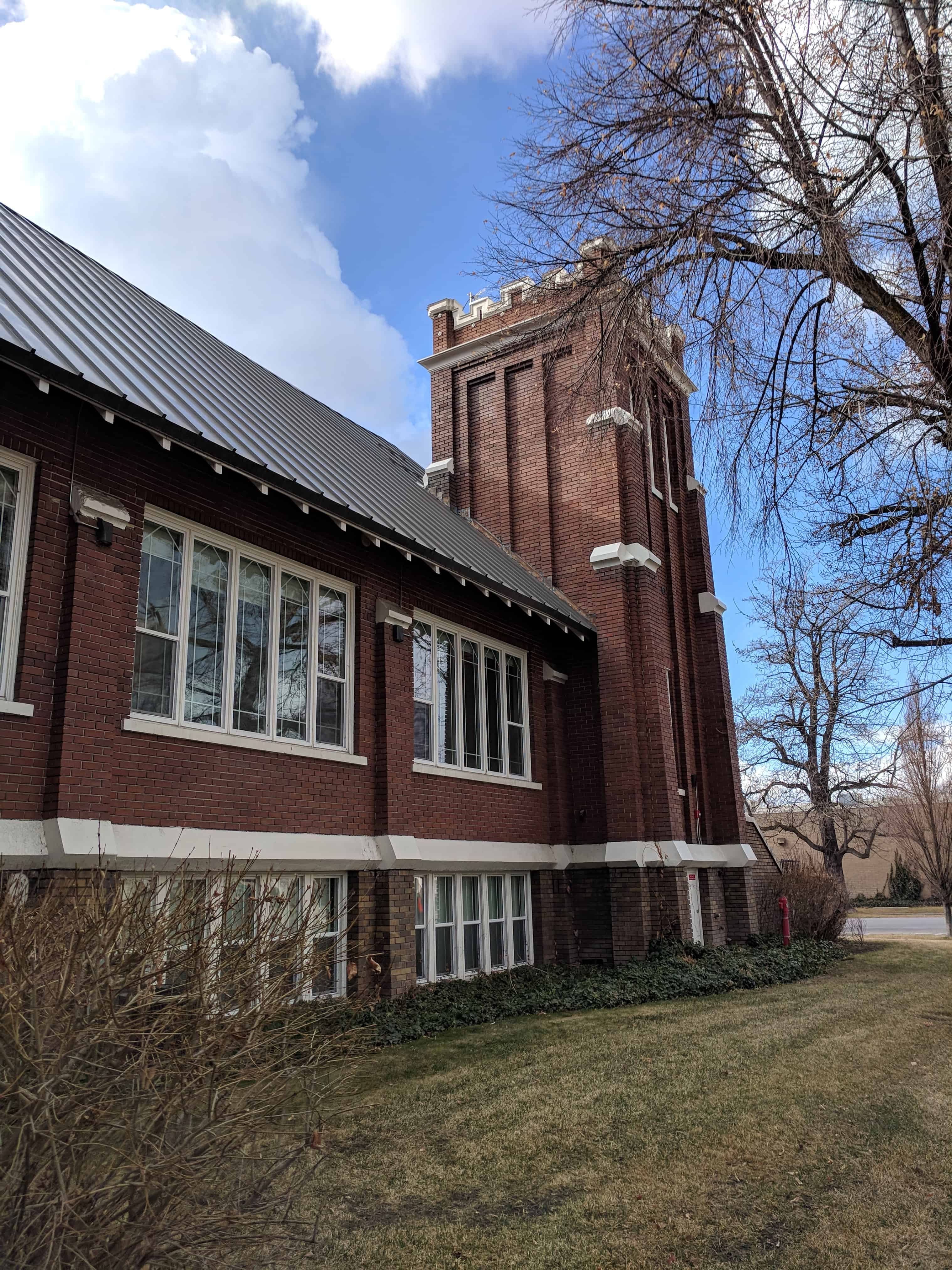 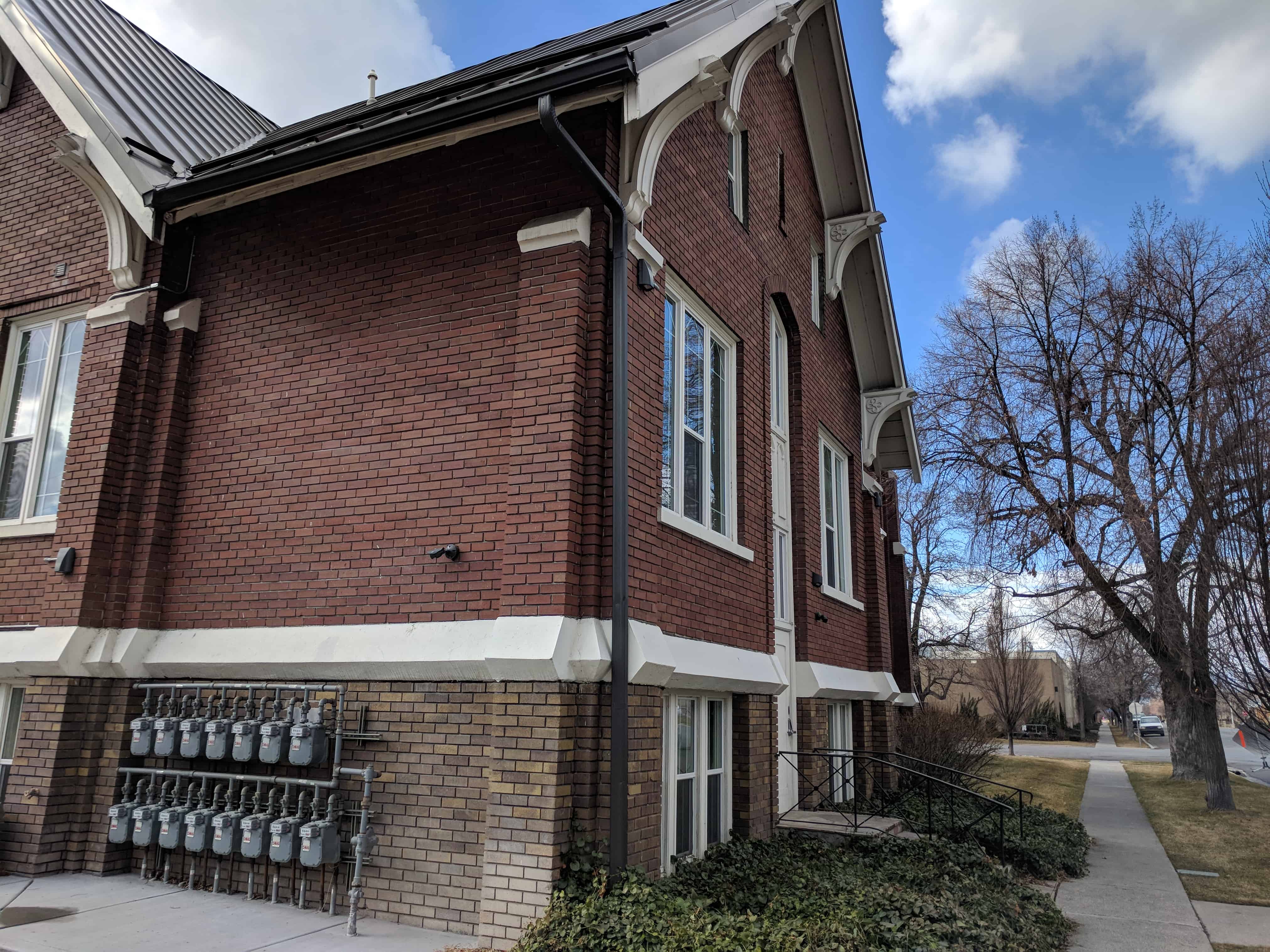 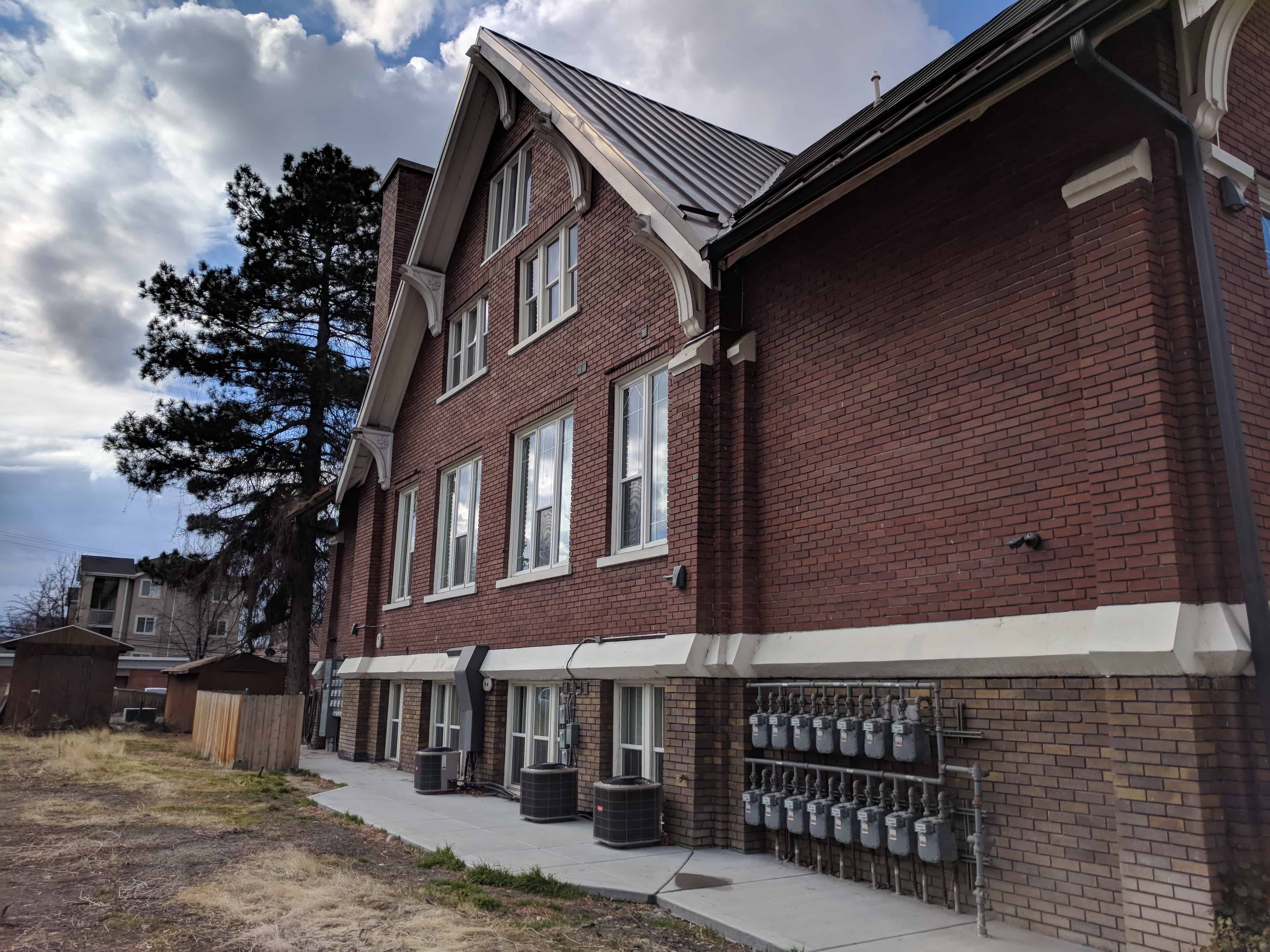 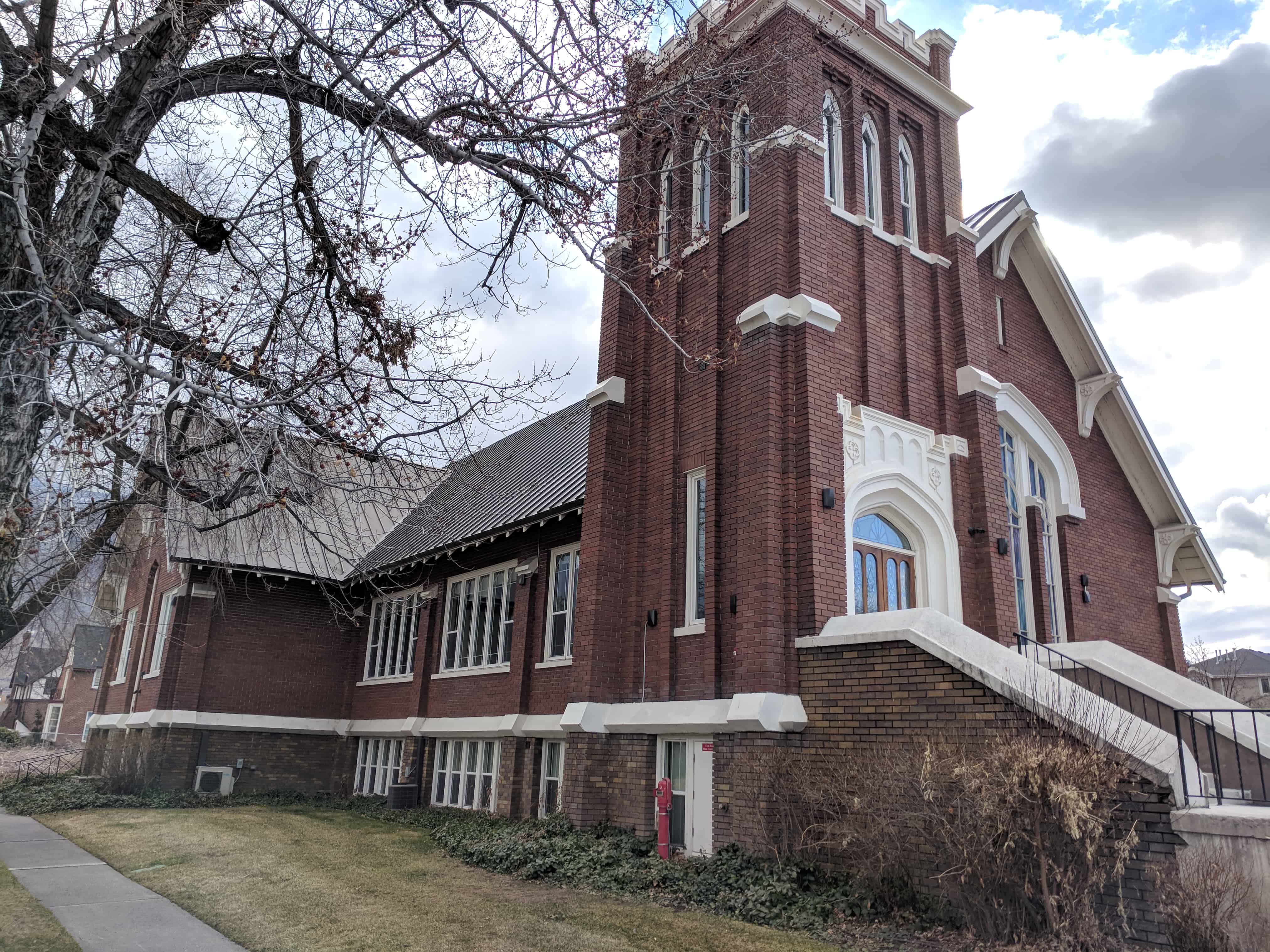 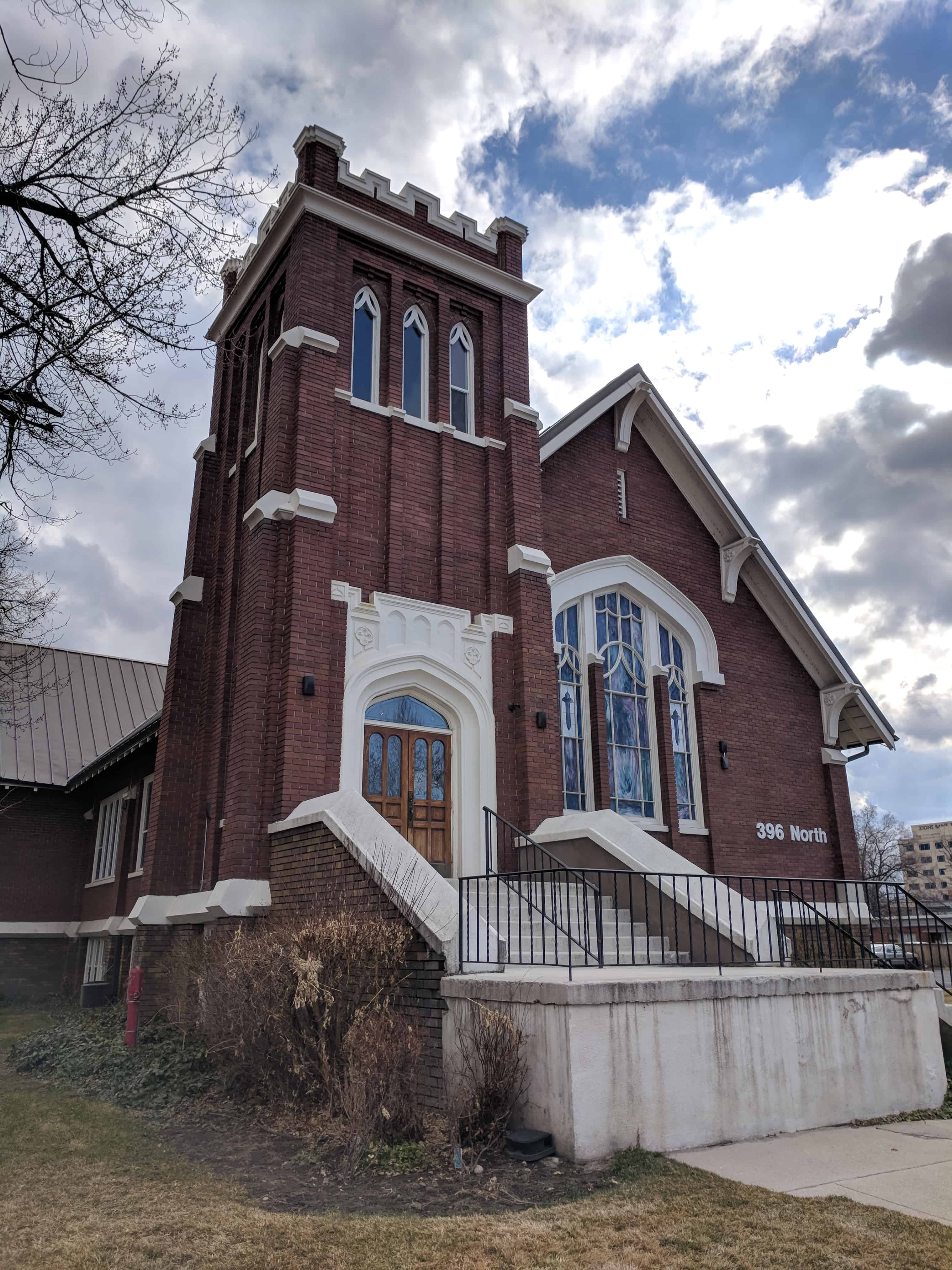 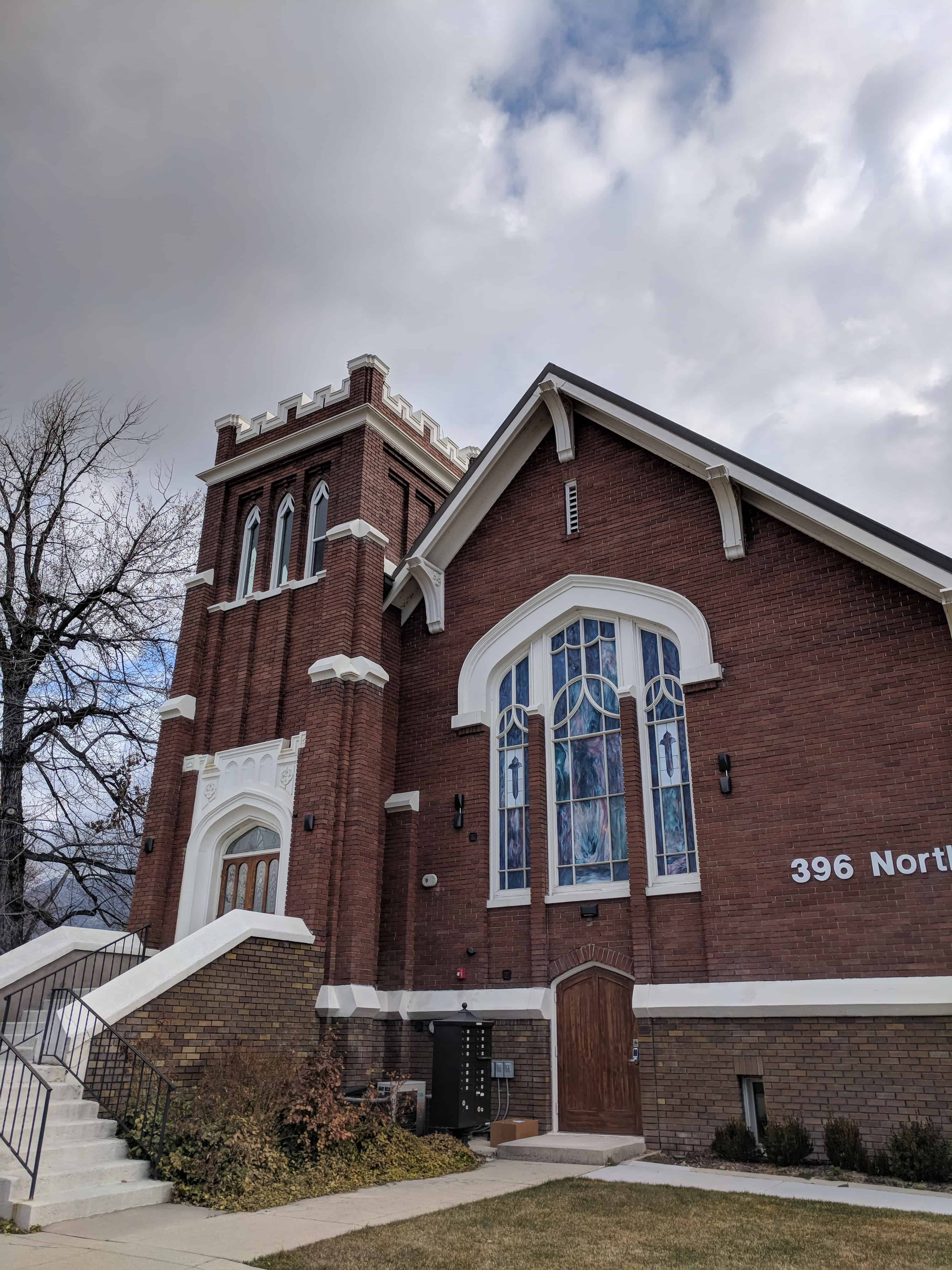 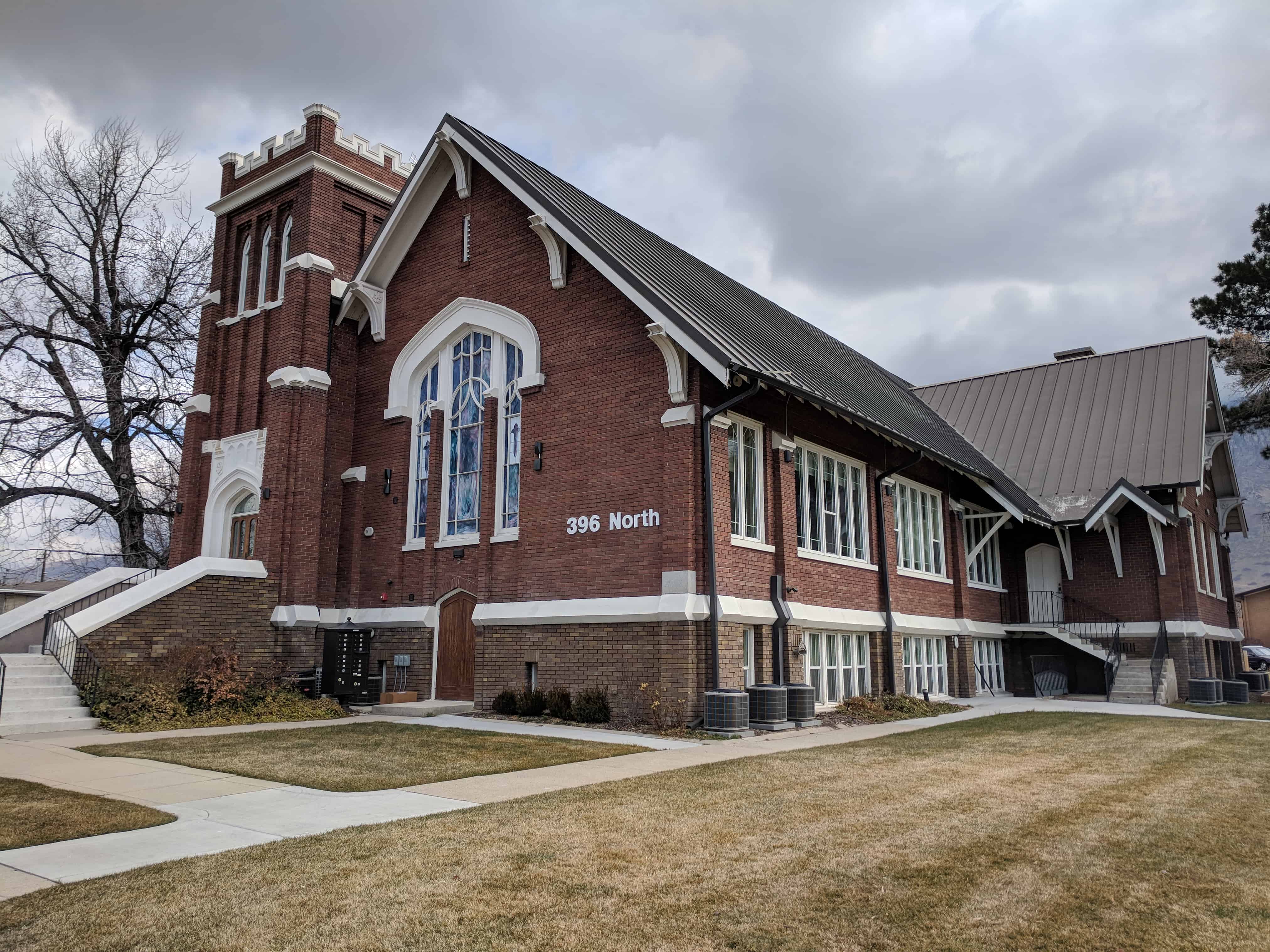 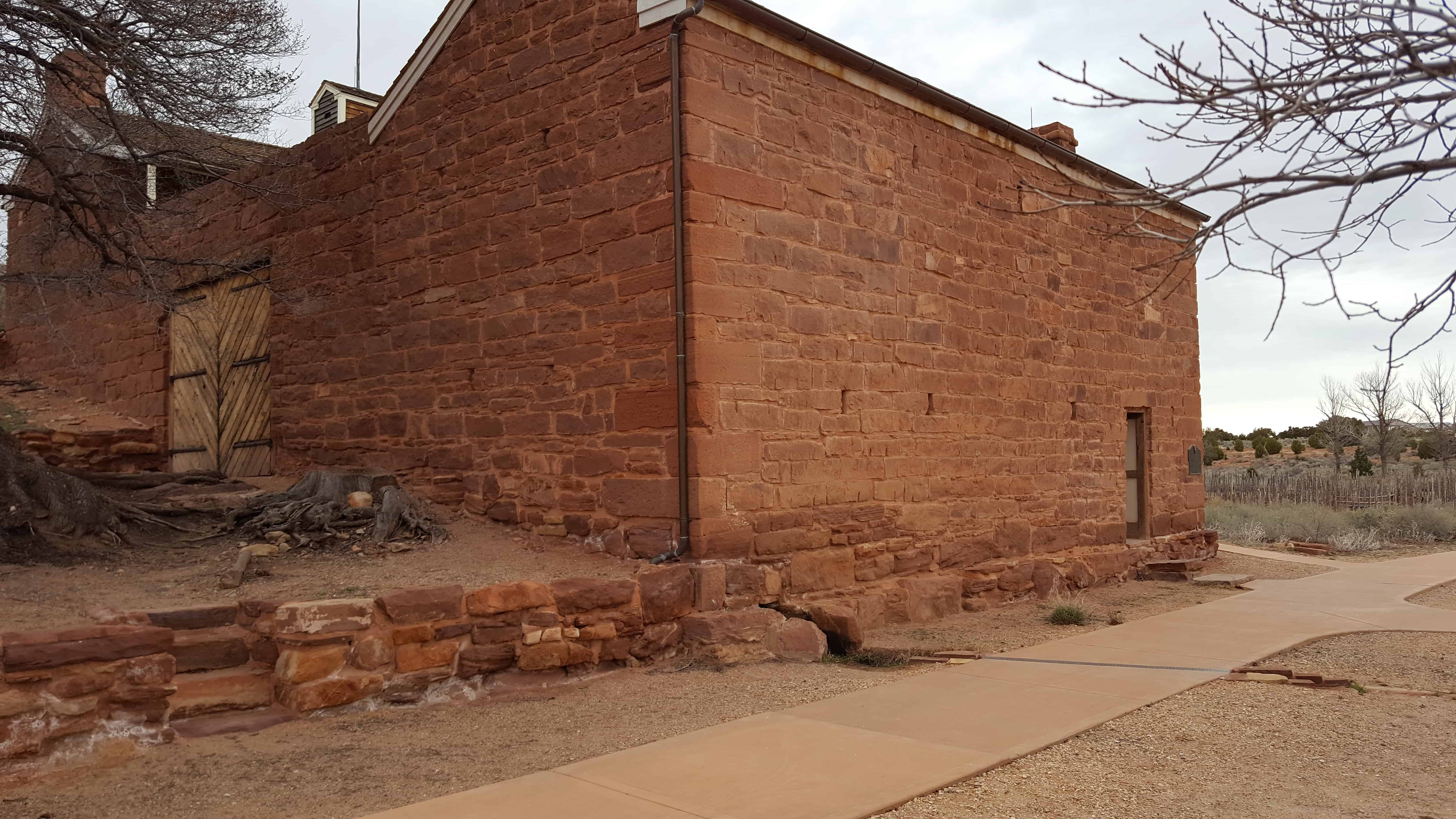 PIPE SPRINGS NATIONAL MONUMENT, Established May 31, 1923, through efforts of Stephen T. Mather and friends. PIPE SPRINGS, occupied in 1863, by Dr. James M Whitmore, who, with Robert McIntire was killed 4 miles S.E. of Pipe Springs January 8, 1866, by Navajo and Piute Indians.
WINDSOR CASTLE Erected by direction of Brigham Young in 1869 – 70 by Anson Windsor for handling the Church tithing herds and as a frontier refuge from Indians. It became the first telegraph office in Arizona when the Deseret Telegraph Line reached here in December 1871.

See other historic markers in the series on this page for UPTLA/SUP Markers. 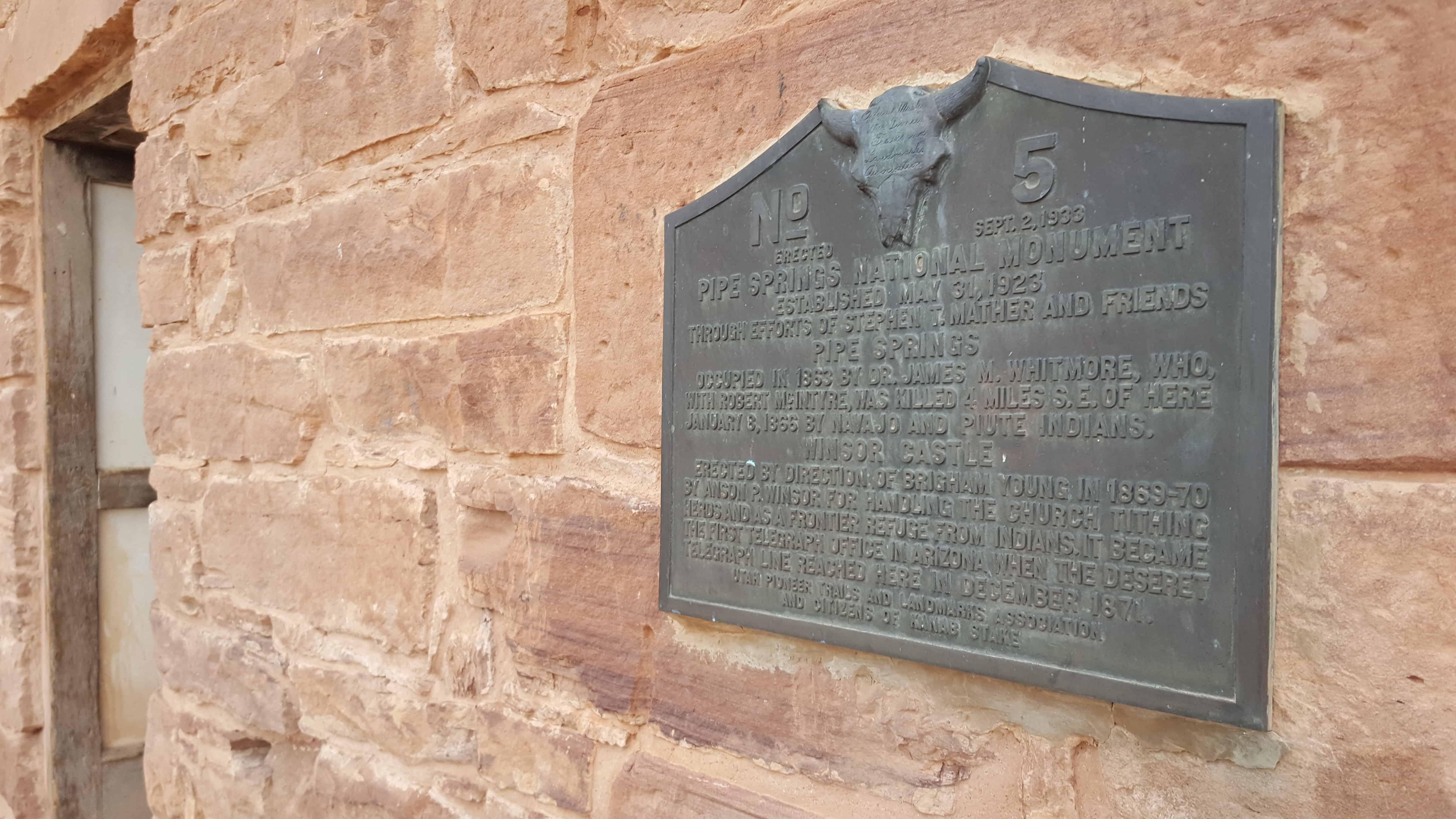 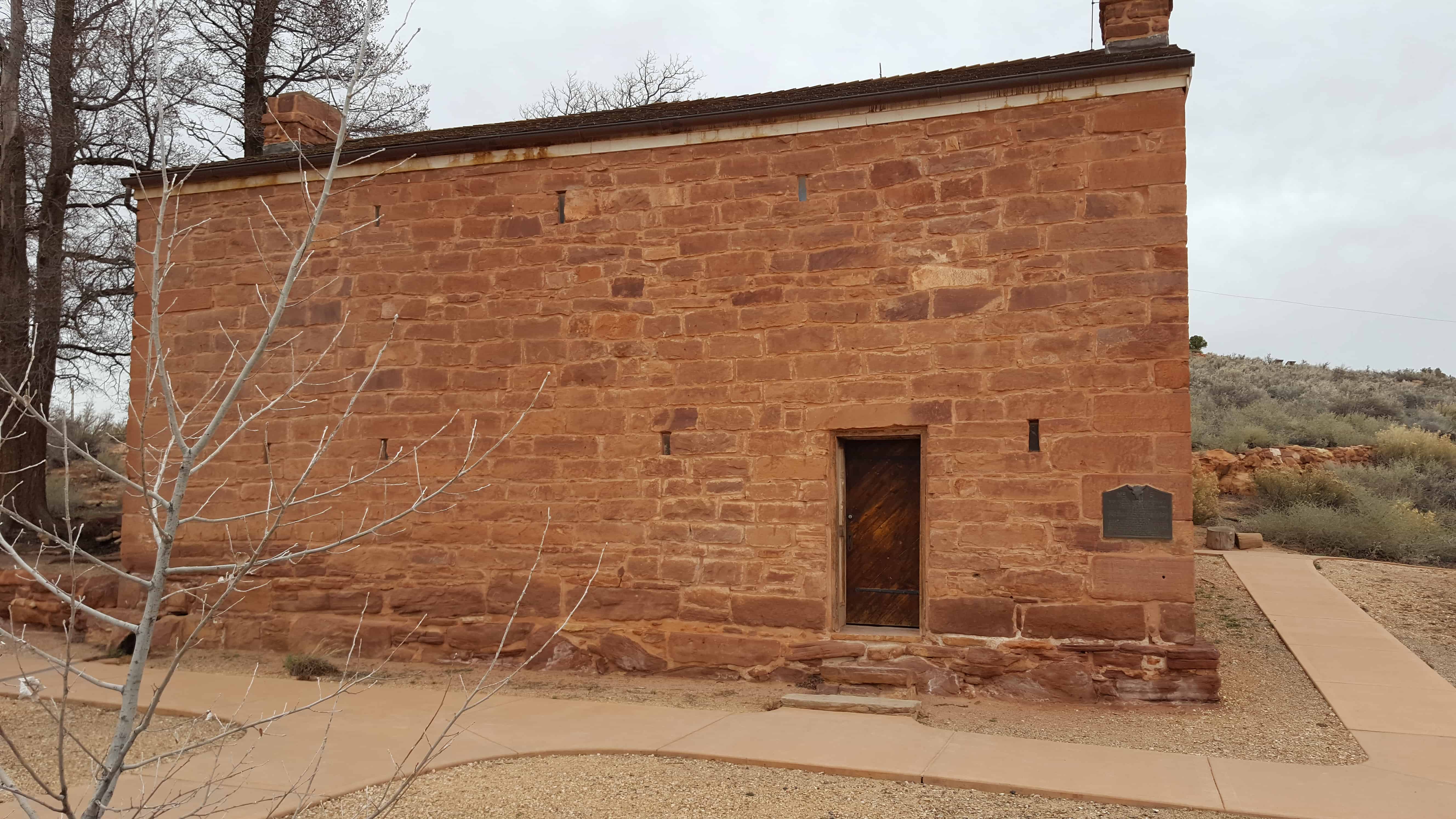 This monument marks the site of the Social Hall, the first recreation center in the intermountain west. Built by the Church of Jesus Christ of Latter-day Saints under the direction of Brigham Young. Made of plastered adobe walls with native wood floors and roof. Auditorium 40 by 60 feet, seating 350 persons – stage 20 by 40 feet – dressing rooms and banquet hall in basement. Dedicated January 1, 1853.

Here the Deseret Dramatic Association conducted many home talent theatricals, musicales and other festivities. Sessions of the Legislature, official meetings, receptions, banquets, and other social functions were held here. It was used as theatre, library and gymnasium by the Mutual Improvement Associations.

This is UPTLA Marker #20, see other historic markers in the series on this page for UPTLA/SUP Markers.

This glass enclosure marks the site of Social Hall, Utah’s first Theater. Mormon settlers built the Social Hall in 1852, just five years after their arrival in the Salt Lake Valley. The simple adobe building was evidence of the strong tradition of theater in Mormon culture. The original Social Hall was demolished in 1922. In 1990, workers discovered the hall’s foundation while excavating for a walkway beneath State Street. Two years later, a glass structure mirroring the original size and shape of Social Hall was built on top of the foundation. To see the Social Hall foundation and an exhibit about the building, enter the glass structure and proceed to the basement level.

The above photos are from my 2017 visit, I stopped by in 2022 to get updated photos and they have moved the monument down into the Social Hall Museum, same location, lower elevation. Below are the updated photos: 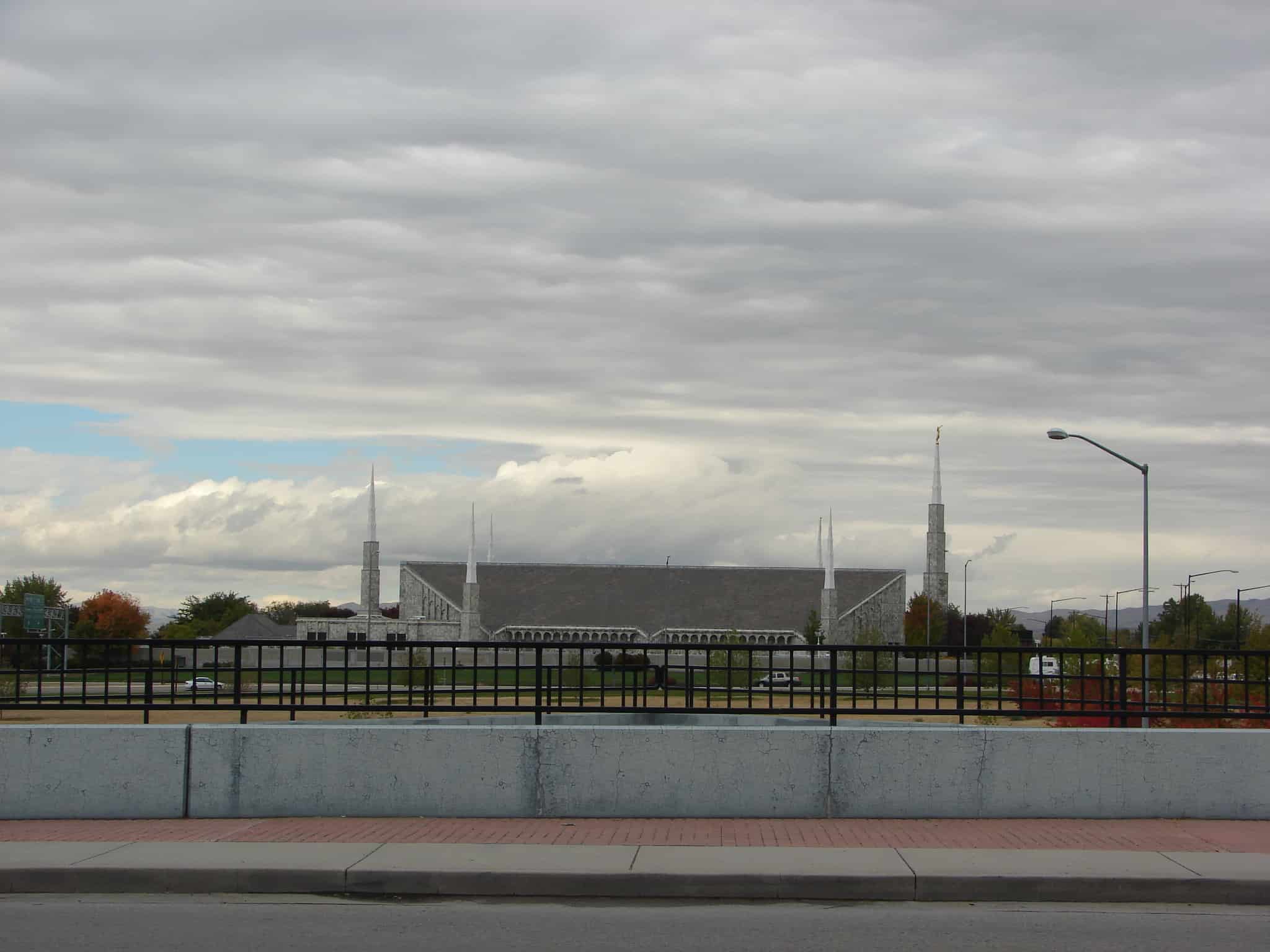 The Boise Idaho Temple is the 29th constructed and 27th operating temple of The Church of Jesus Christ of Latter-day Saints (LDS Church). The temple is located in the city of Boise, Idaho.

(The DUP Marker at the Temple)

The location of the park is where, on July 24, 1847, Brigham Young first saw the Salt Lake Valley that would soon become the Mormon pioneers’ new home. Members of The Church of Jesus Christ of Latter-day Saints believe that Young had a vision shortly after they were exiled from Nauvoo, Illinois. In the vision, he saw the place where the Latter-day Saints would settle and “make the desert blossom like a rose” and where they would build their State of Deseret. As the account goes, Brigham Young was very sick with Rocky Mountain Spotted Fever and was riding in the back of a wagon. After exiting Emigration Canyon and cresting a small hill, he asked to look out of the wagon. Those with him opened the canvas cover and propped him up so he could see the empty desert valley below. He then proclaimed, “It is enough. This is the right place. Drive on.” The words, “this is the place,” were soon heard throughout the wagon train as the Mormon pioneers descended into the valley, their long journey having come to an end. The statement was first attributed to Young by Wilford Woodruff more than thirty years after the pioneer advent.

Over the next several years, tens of thousands of Mormon pioneers emerged from Emigration Canyon and first saw their new home from this same location. A Utah state holiday, Pioneer Day, occurs each year on July 24 to commemorate the Mormon pioneers’ entry into the valley.

For other State Parks in Utah visit this page. and for other parks in Salt Lake this page.