On July 15, 1884, a U. S. Calvary scout named Joseph S. Wormington and a cowboy names James “Rowdy” Higgins were killed in a battle with Indians at nearby Paiute Pass. These men were part of a posse of cattlemen and Sixth Calvary – F – troop soldiers from Fort Lewis, Colorado who were chasing a band of renegade Ute and Paiute Indians led by Mancos Jim. The Indians had stolen 150 head of horses from the round-up grounds in Verdure, Utah. After a 75 mile chase the Utes and Paiutes led the posse and soldiers into an ambush.

Two months after the battle, prospectors Cass Hite and Joe Duckett found and buried the remains. The Utes and Paiutes were watching the U. S. Government absorb their homelands. They fought back in the only way they knew how. The soldier gave his life in the service of his country. The cowboy did the tough job he was paid to do and a little more. All of them played out their heroic roles in this epoch struggle to settle the old west. 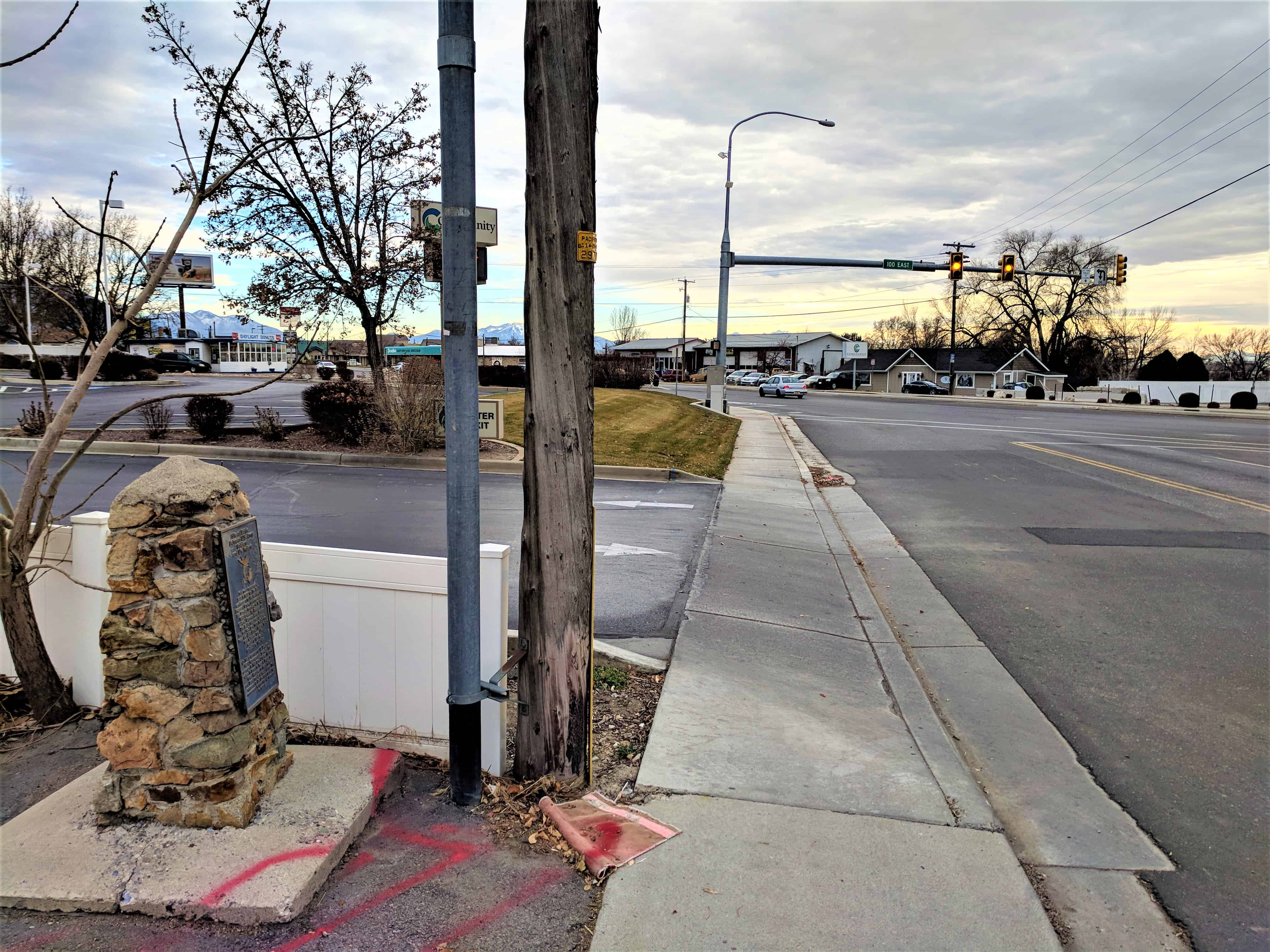 Site of Battle Between U.S. Army Soldiers and Ute Indians

This rock monument, built in 1930 on the 80th anniversary of the settling of Pleasant Grove, commemorates the Sunday morning of 12 April 1863 attack by Indians on Colonel Conners army troops. The battle occured outside the fort wall, and from within and near the John Green house, which was situated one block south of the wall, probably at this site.

On the afternoon of 13 September 1930, townspeople traveled by caravan to this and 5 other historic sites in town to hear a bugle call, brief histories of each site and band music at each stop. This appears to be the only existing monument left of the six erected in 1930. 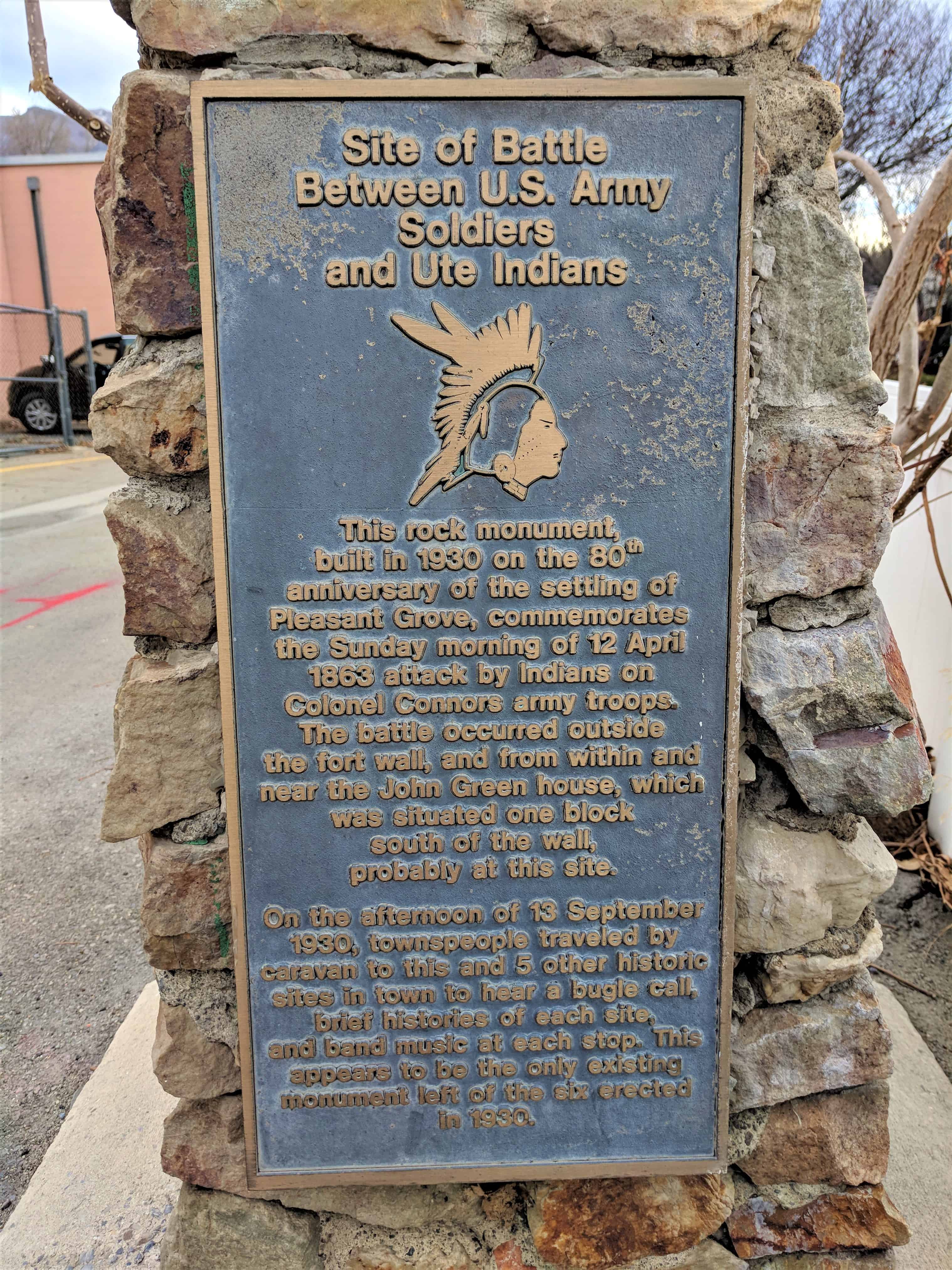 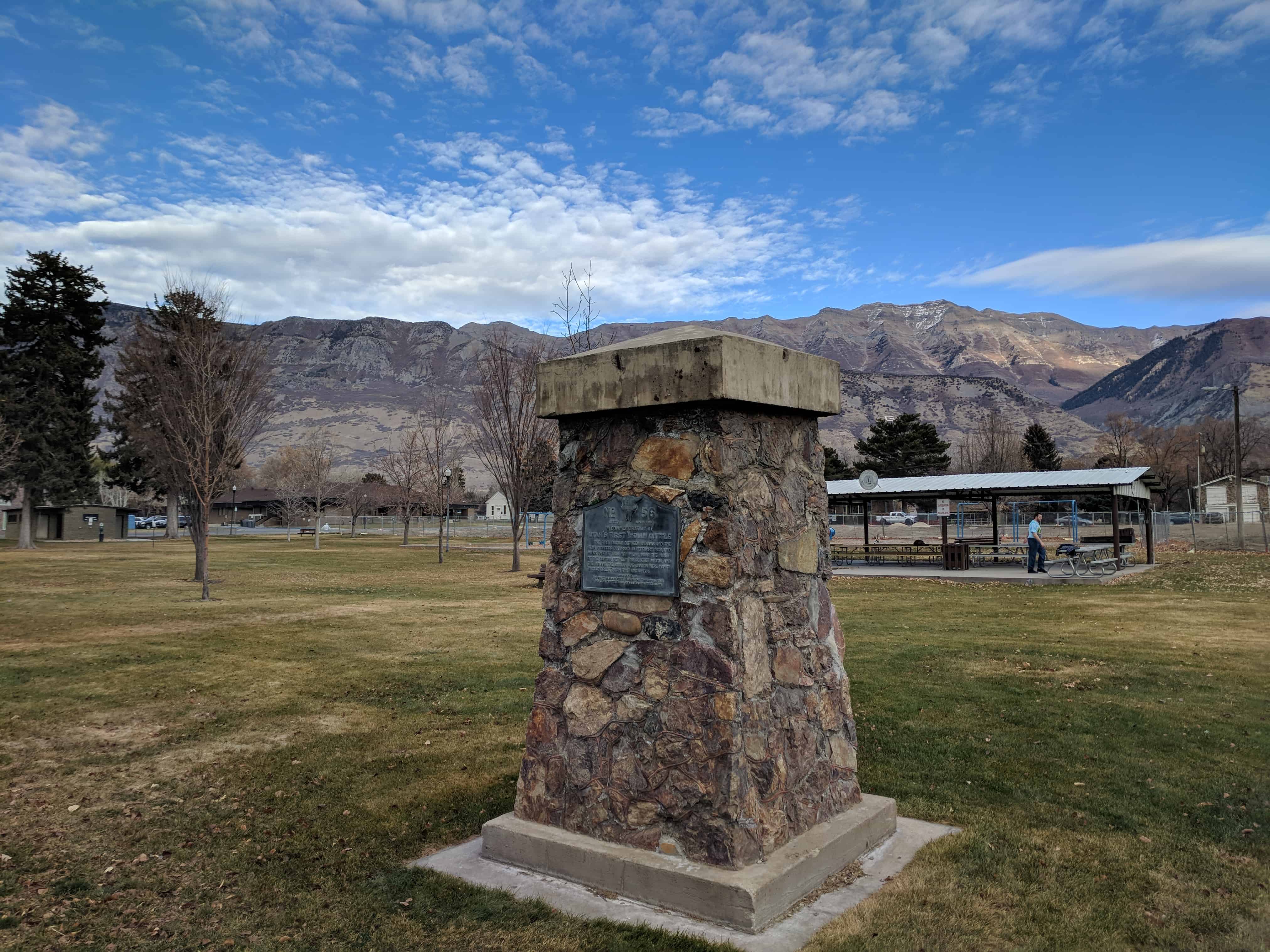 The first battle between Indians and the Utah Pioneers occurred in February 1849, two miles east of this monument, near the mouth of the canyon, between the Deseret Militia and the Indians. The stream and canyon were named “Battle Creek” from that encounter.

This is U.P.T.L.A. Marker # 56, see other SUP/UPTLA Markers on this page.  This historic marker is located in Downtown Park in Pleasant Grove, Utah. 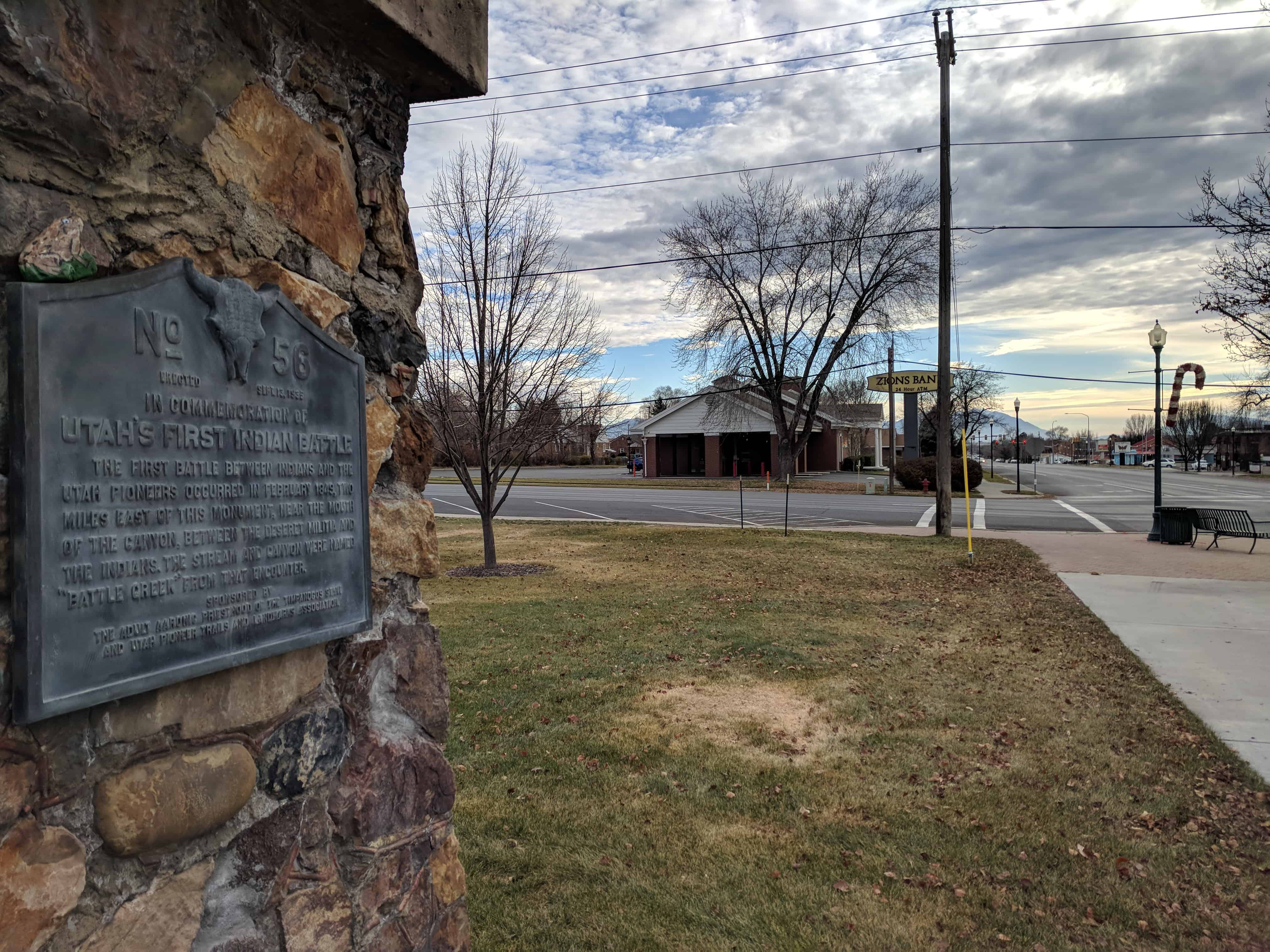 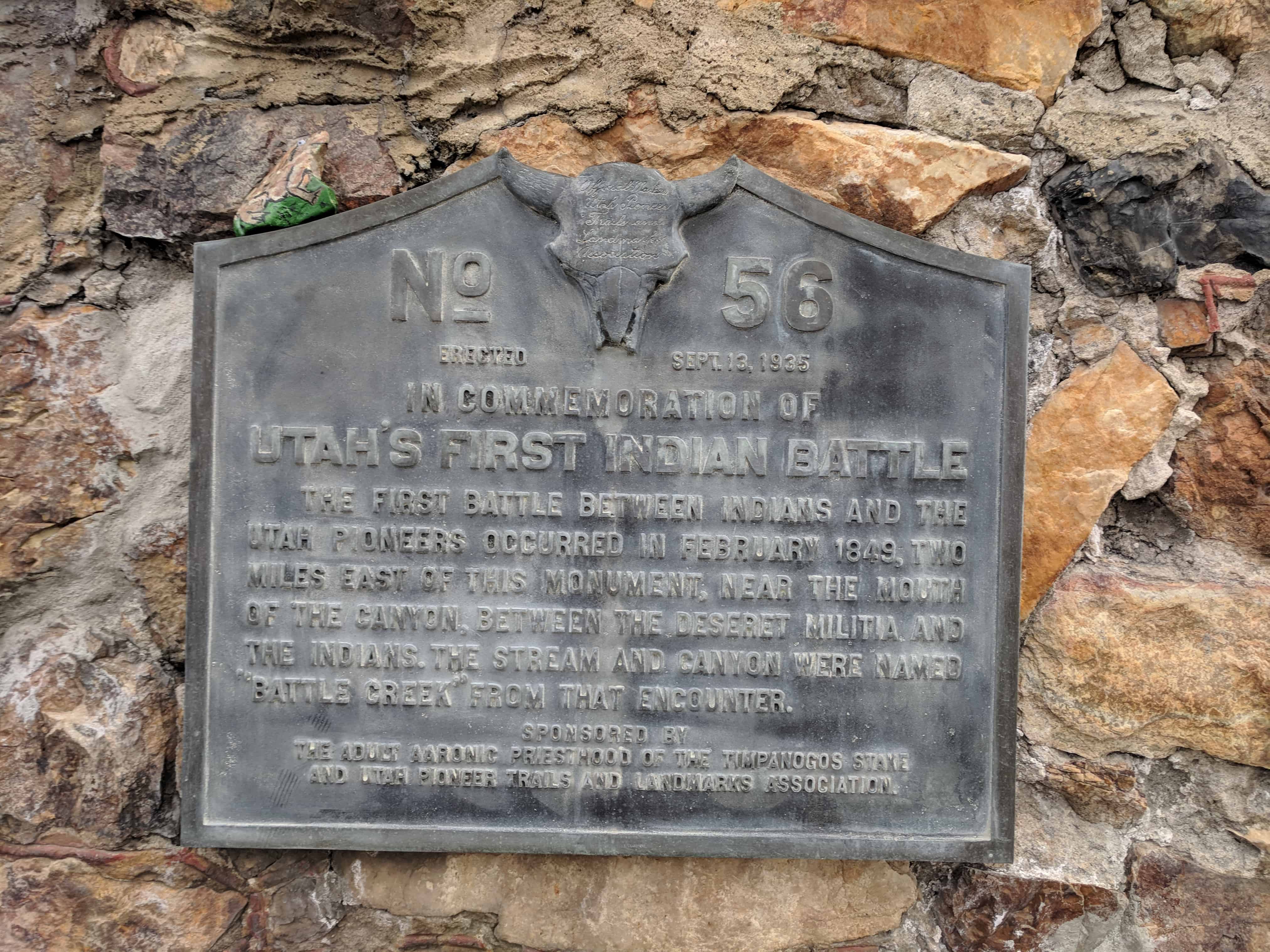 Utah’s largest-ever Indian Battle took place just north of Bulldog Boulevard (1200 North) and east of 500 West near what is now Riverside Plaza.  It was fought in the cold and snow in February of 1850, less than a year after the Mormon colonizers had founded Fort Utah in April, 1849.

The Utes had not wanted the colonists to settle in the valley in 1849.   The native Americans had been the rulers over one of the best valleys in the Great Basin for hundreds of years.  They jealously guarded what they considered to be their wood, water, grass, fish and game.

When the settlers arrived and began taking over these resources, the Utes pushed back and open warfare between the two groups broke out.  The Indians seldom fought pitched battles but instead relied on guerrilla warfare.  Finally, the settlers attacked the Utes in their fortified village about a mile upstream from the colonists’ original Ft. Utah.

The local colonists and militiamen from Salt Lake valley attacked the Timanogots Utes with a cannon barrage and a cavalry charge.  The settlers also used A-shaped, moveable batteries constructed of heavy wooden planks mounted on sleigh runners (it was winter time) to enable the militiamen to move over the snow and get near the Indian village.  The men sheltered inside these protective batteries pushed themselves forward and used portholes to fire their rifles into the village at close range.

After fighting bravely for two days, the outnumbered and outgunned Utes left their stronghold in small groups under cover of darkness and scattered over the countryside and into the mountains.  They left eight bodies in their fort and likely carried others with them.  Only one settler, Joseph Higbee, died in the battle.

This marker is #9 in a series, see the others on this page. The marker is located at 37 West 3700 North in Provo, Utah 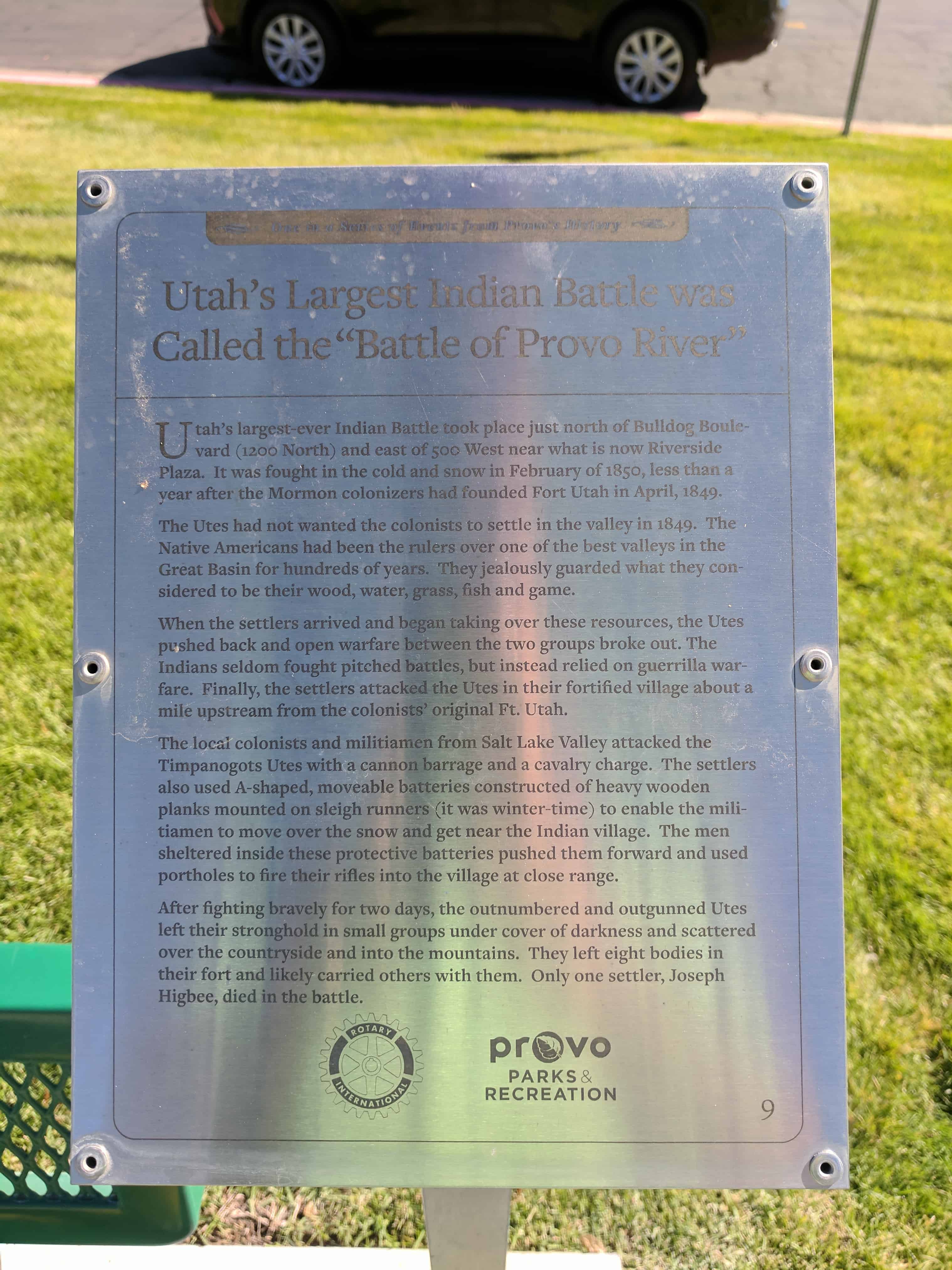