The Daniel Carter Barn was built in 1850. It is the oldest structure standing in its original location in Bountiful.

Daniel Carter was born 28 August 1803, in Benson, Rutland, Vermont, the son of Jabez Carter and Rebecca Dowd. He was a farmer by profession. After joining the Church of Jesus Christ of Latter-day Saints, he moved first to Kirtland, Ohio, then Far West, Missouri, then Nauvoo, Illinois, and finally traveled by wagon train to the Salt Lake Valley in 1850 with his daughter, Ruth Clarissa.
He settled in what is now known as Bountiful. He built the rock barn to shelter not only his animals, but his family. Carter is listed among the area’s first nurserymen.
A description in the book, “east of Antelope Island,” said “Many a tree was budded by him.” He had the best fruit orchard in Bountiful and the produce from his vegetable garden was so plentiful, that he always had much to give away. Flowers, too, grew abundantly around his home. He died 10 April 1887, and is buried in the Bountiful City Cemetery.

The Anson Call home, built in 1859 and located at 1201 N 200 W in Bountiful, Utah is one of the older homes in the area and a very cool historic home, there’s a lot of content online about it being haunted and it is apparently being leased by the owner (D U Company) to a paranormal investigating company that gives tours. 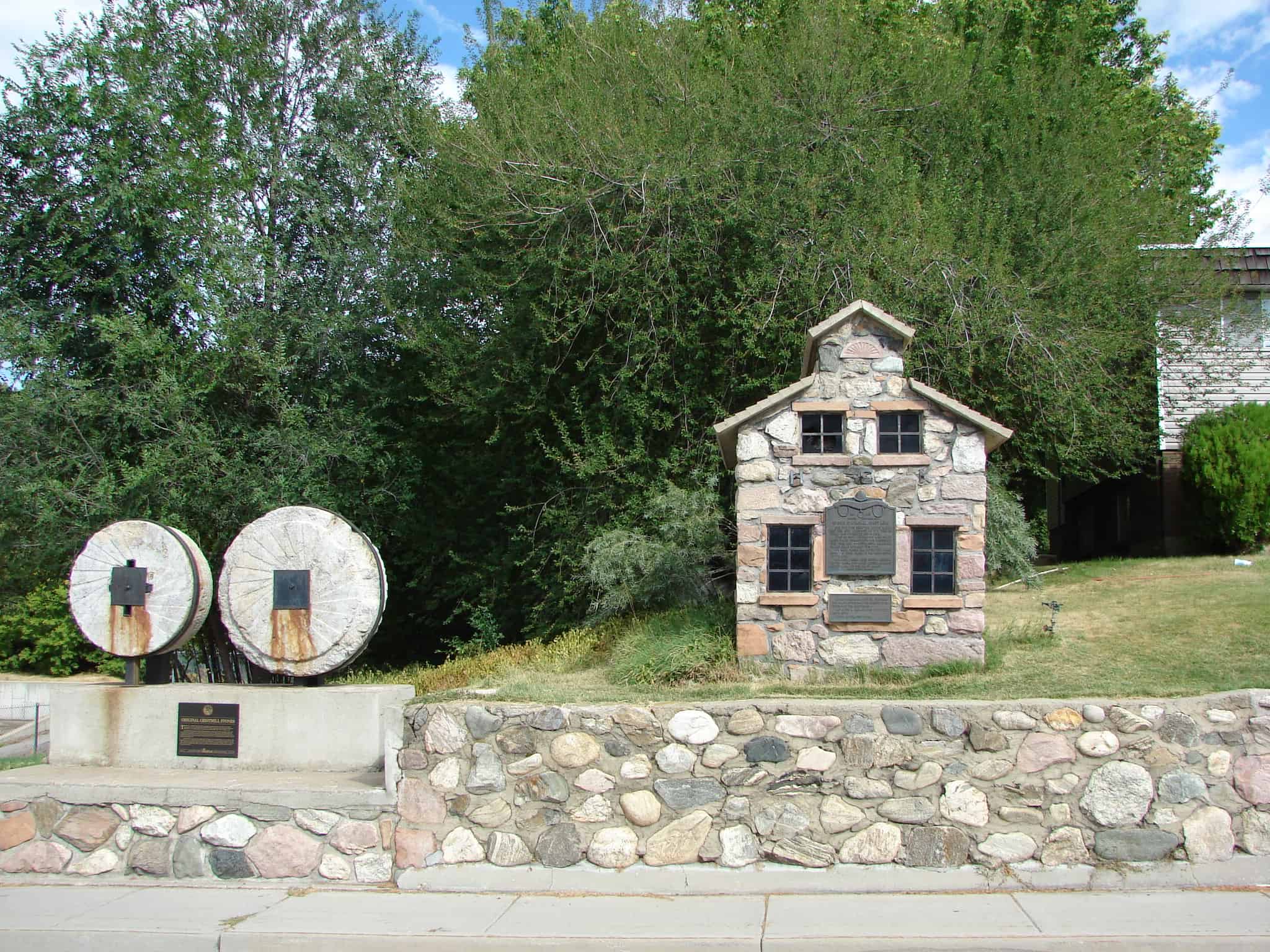 The Heber C. Kimball Gristmill, the foundation of which can be seen just east of this monument, was in operation from 1852 until 1892, using these burr-type gristmill stones. When the use of roller mills was introduced, mills of this type were no longer used.

The South Davis Chapter, Sons of Utah Pioneers, formerly owned the property this mill was located on. In 1984, it was sold to Davis County, who, in cooperation with Bountiful City, constructed a debris catch basin on the site. During the excavation of the basin site, these two original gristmill stones were uncovered and found to be in remarkably good condition after all these intervening years.

Permission was granted the South Davis Chapter, Sons of Utah Pioneers to construct this monument so as to complement and enhance the Daughters of Utah Pioneers replica of the old mill, and their monument, located just to the right of this monument. Thanks is given to all who had a hand in making this effort a reality and being able to bring back a few memories of our Pioneer Ancestors. 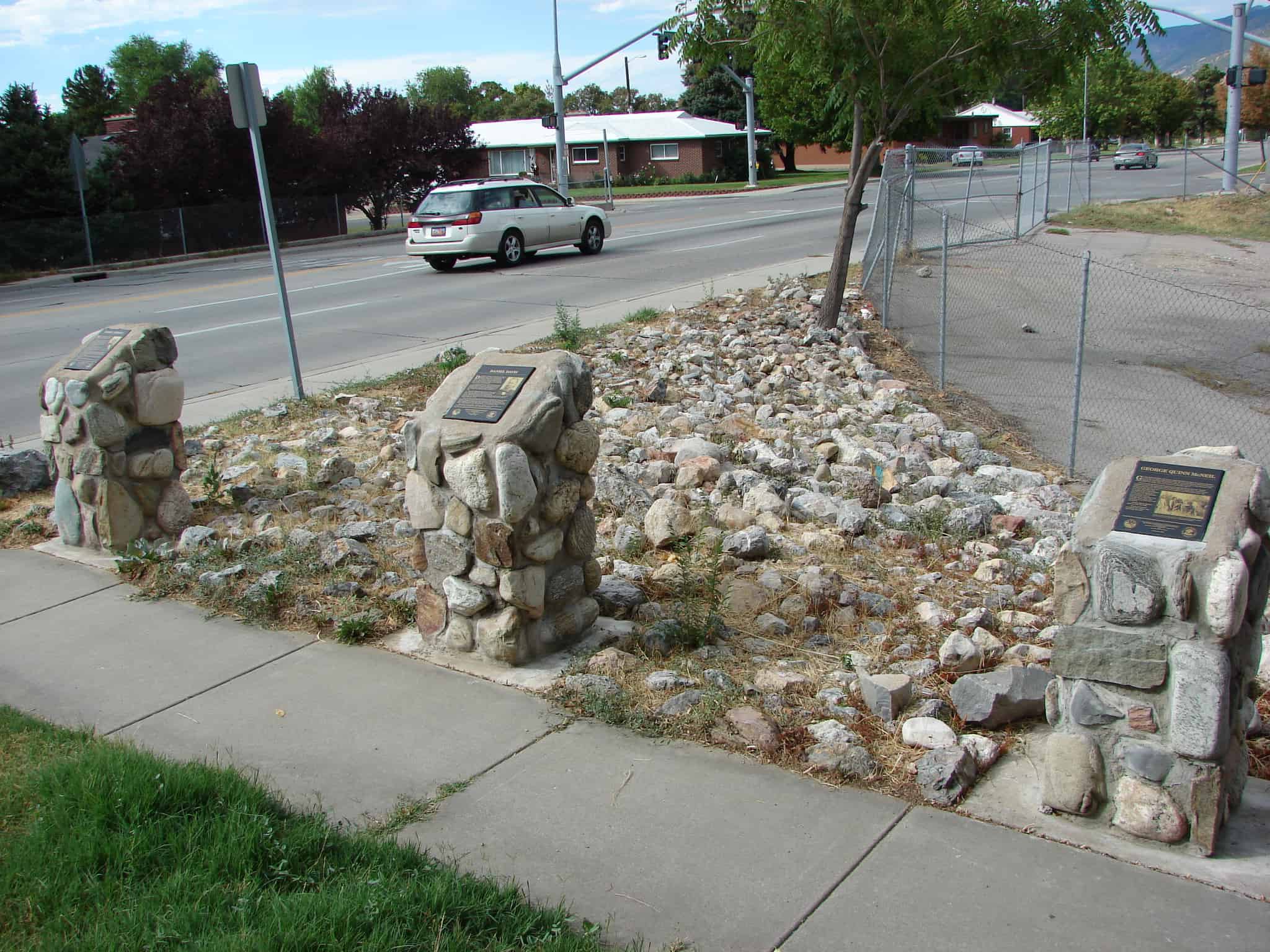 Daniel Davis was born on December 18, 1808, in Amesbury, Essex County, Massachusetts, the third child of Wells Davis and Mary Kelly Davis. As a young man Davis traveled to Nauvoo, Illinois, where he was converted to the Church of Jesus Christ of Latter-day Saints, and was adopted into the Heber C. Kimball family.

Pursuant to Kimball’s desire to erect a flour gristmill on this site, which was then known as North Mill Cañon, Daniel Davis began to clear this ground on July 18, 1852. On April 20, 1853, the mill’s northeastern cornerstone was laid by Isaac Hunter, the southeastern stone by Daniel Davis. The next day Heber C. Kimball dedicated the site.

Upon the mill’s completion Davis assumed its management, living in an adobe house southwest of this site. The three-story mill was then the largest in Utah Territory. In 1869, the Kimball grist mill was purchased for $8,000 by Bishop John Stoker and others of the Bountiful Cooperative Mercantile from the trustees of the Heber C. Kimball estate. Later, the mill became an entertainment center.

Daniel Davis died at age 84, on February 25, 1892. Now, a century later, we recognize his many contributions to the mill and the community. 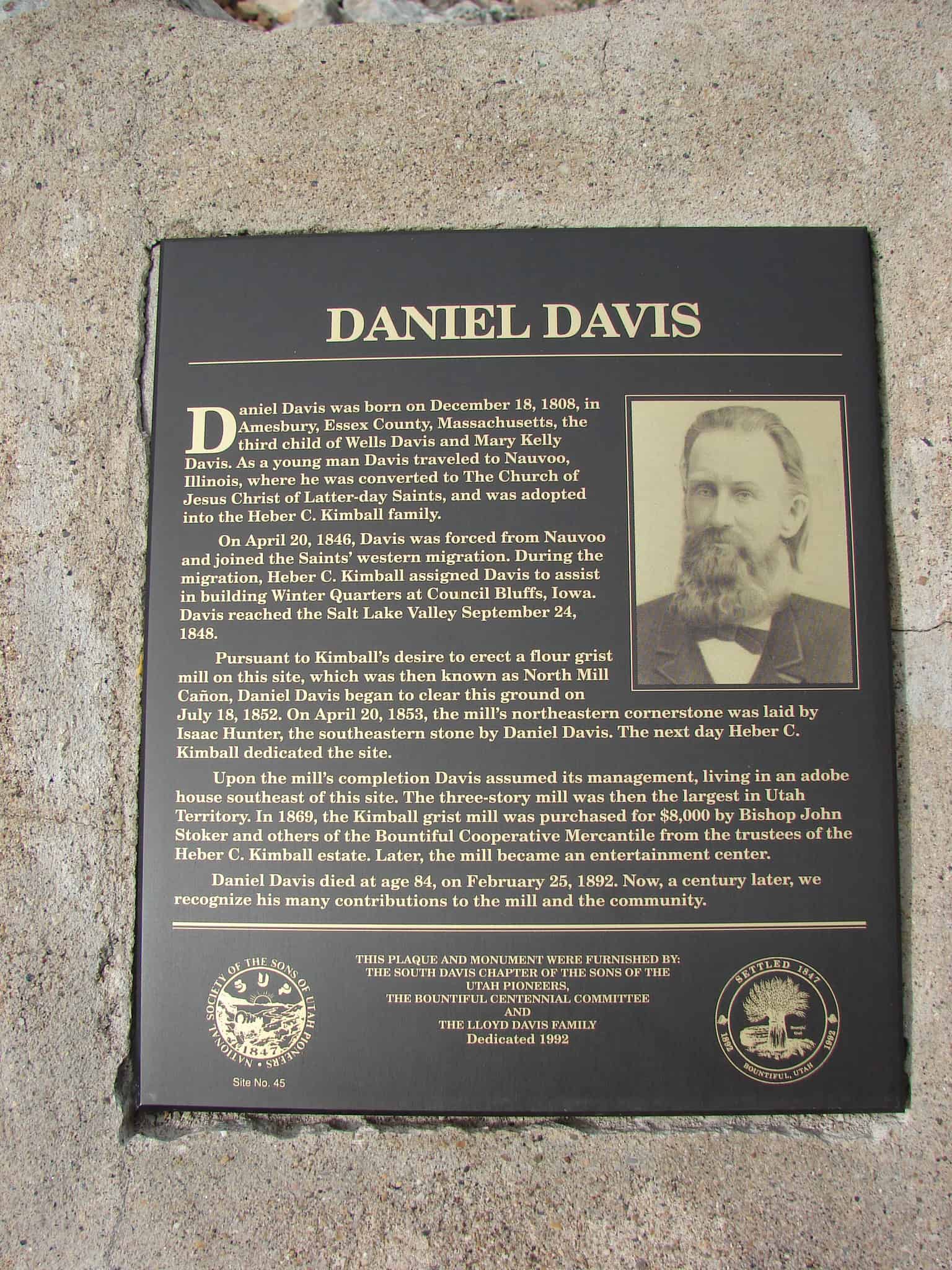 Kimball was converted to The Church of Jesus Christ of Latter-day Saints in 1832. He was called to be a member of the Church’s Quorum of Twelve Apostles in February 1835 and led the first missionary thrust to England during the 1830’s. This effort resulted in much Church growth. In December 1847, he became Brigham Young’s first counselor in the Church’s First Presidency.

On July 24, 1847, Heber C. Kimball arrived with the first group of Mormon pioneers in the Salt Lake Valley. By 1849, he had become the first chief justice of the provisional State of Deseret and the State’s lieutenant governor. In his time, Kimball was involved in many important events in Utah Territory and the Church.

Kimball, who owned property and had family here, felt a need for a flour mill in the North Cañon Ward (now known as Bountiful City). Then, farm efforts in Bountiful were dominated by grain production and he felt the mill would be a good investment. Kimball was granted land rights in 1851. After its completion in the fall of 1853 he dedicated the mill.

Water to run the mill was stored in a pond that was excavated on its south side. An adobe cottage faced the mill on the east bank. Poplar trees were planted around the pond. 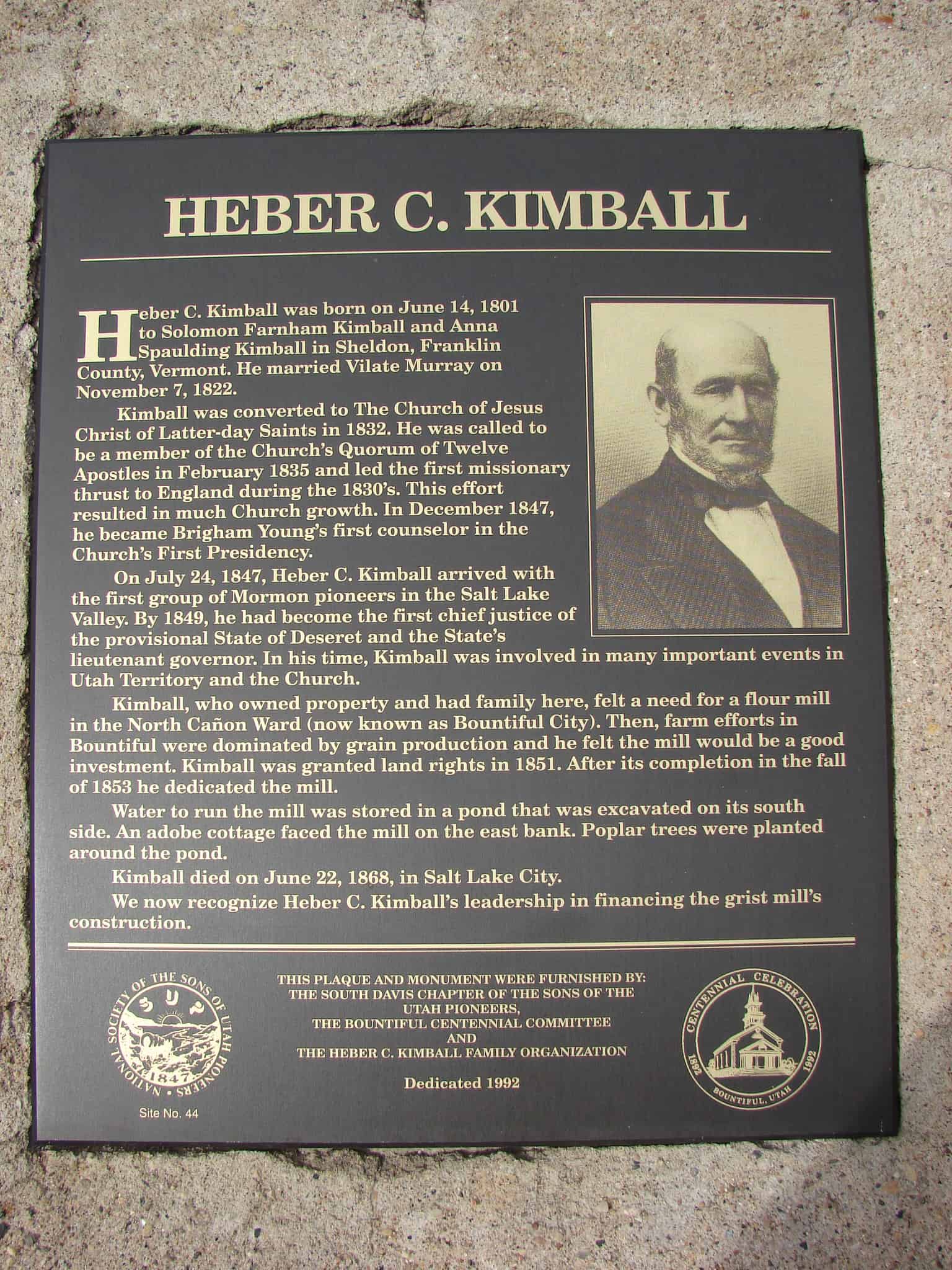 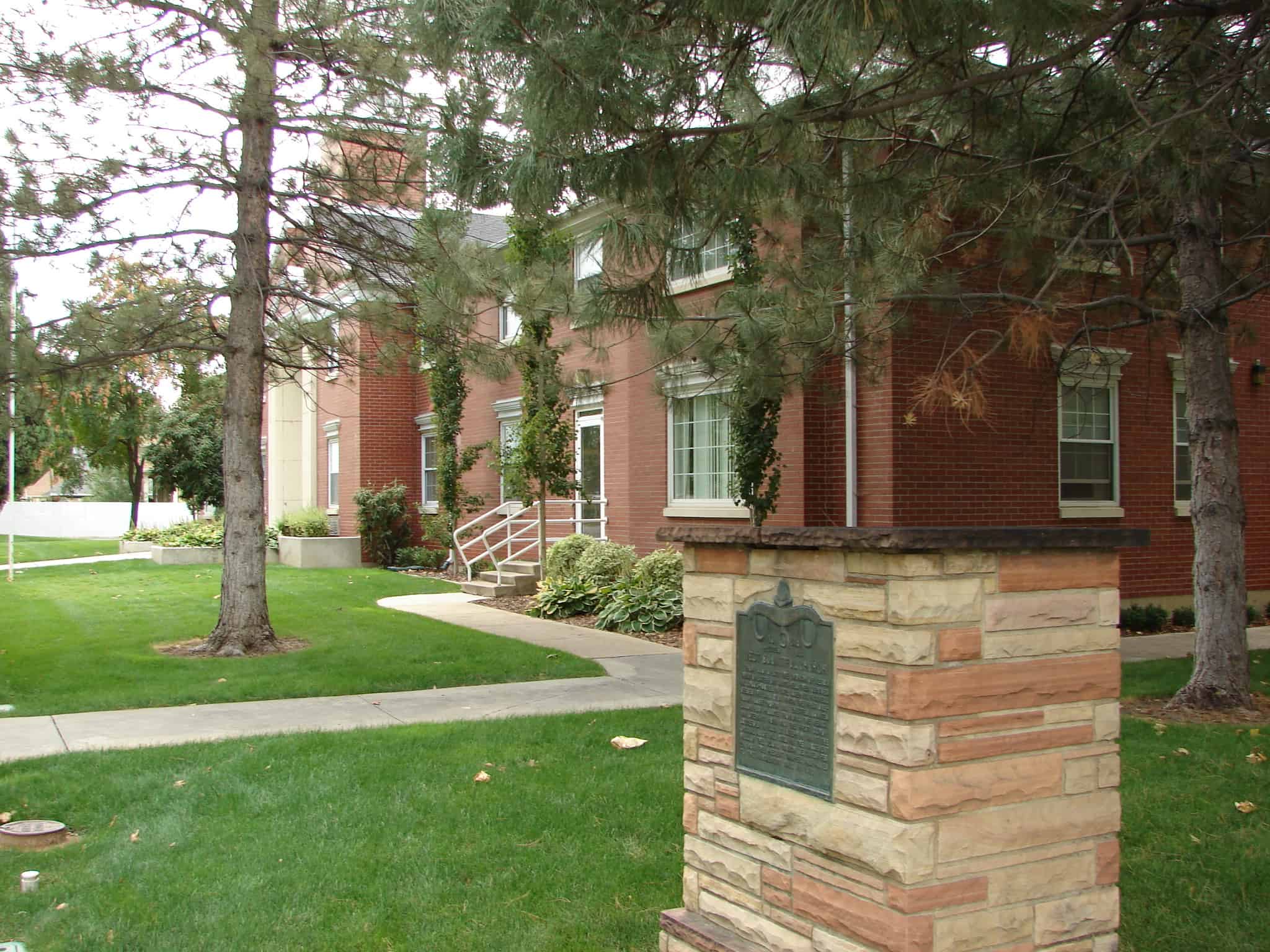 Aaron and Sarah Smethurst homesteaded 160 acres on this site in 1895.
John and Mary Eggett bought the early pioneer farm for $400 in 1902 and raised nine children here.  Farm animals, orchards, and a garden provided most of their needs.  The Eggett family held all the property until 1959, when part of it became Memorial Estates Cemetery.  After the floods in 1983, a landfill bridge was built to the east and the John Eggett family donated three acres to Bountiful City for this park while the remainder was subdivided.
See other parks in Bountiful here.