On December 17, 1901, the first church in Orderville was dedicated by Apostle A. O. Woodruff of the Church of Jesus Christ of Latter-day Saints. This bell hung in the tower and was used each Sunday to call people to church. It was also used to warn people of fires until the building was torn down in 1956.

The cemetery in Orderville, Utah

Here on March 30, 1874, the Church of Jesus Christ of Latter-day Saints organized a modern Order of Enoch, called the United Order, Israel Hoyt, first president. A community dining hall with bakery was constructed, also a garden house for seeds and tools. They built a carpenter, blacksmith and shoe shop, tannery, gristmill, sawmill, molasses mill, bucket factory, a woolen and cotton factory; engaged in the silk industry, dairying, broom and hat making. The people planted farms, orchards and gardens, raised sheep and cattle. The cooperative ended in 1886. 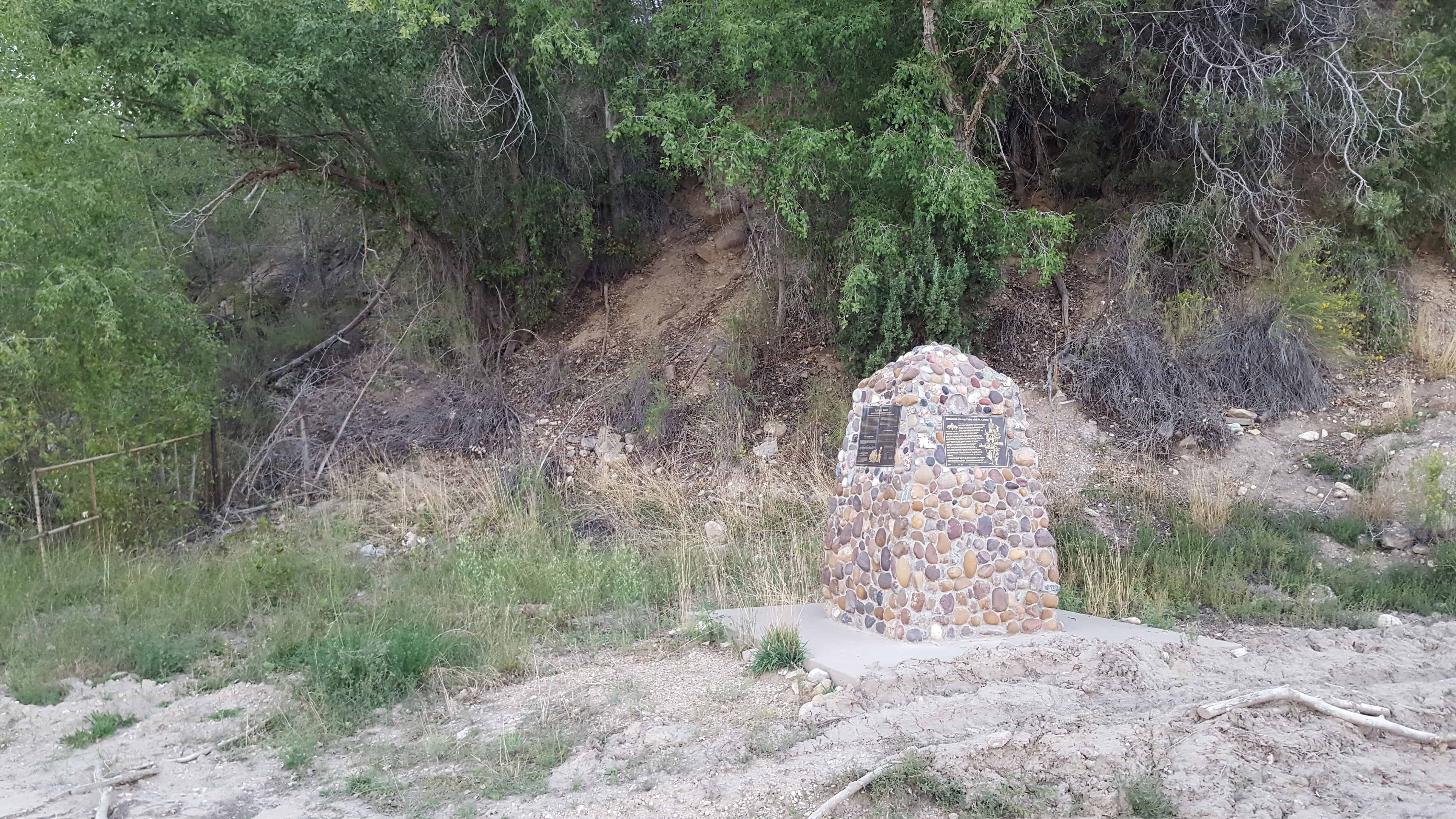 The first written account of the exploration of Long Valley was given by John D. Lee in 1852. Coming from Parowan, the explorers were under the direction of Bishop John R. Smith. James Lewis kept the records. The others were John D. Lee, John Steel, John Dart, Solomon Chamberlain, Francis T. Whitney and Dr. Priddy Meeks.

The party entered the Sevier Valley, followed the Sevier River south, over the divide and down the east fork of the Virgin River through Long Valley. Stopped from going further by Zion Canyon on the west they retraced their tracks returning to Parowan.

In the summer of 1862, a group guided by Dr. Priddy Meeks, John and William Berry came to Long Valley looking for grazing and farm land. In the spring of 1864, this group with others again returned to the valley. Priddy Meeks became the first white settler in Lower Long Valley when he and his family built a dugout in the hill behind this marker. The town was first called Windsor then changed to Mt. Carmel by Joseph W. Young because the cedar covered hills resembled the country of Mt. Carmel in Palestine.

Sarah Deseret, daughter of Dr. Meeks and Mary Jane, was born in 1864 in Berryville. She was the first child born in Long Valley and present day Kane County. The settlers had to leave Long Valley during Indian difficulties, but returned to stay in March of 1871. 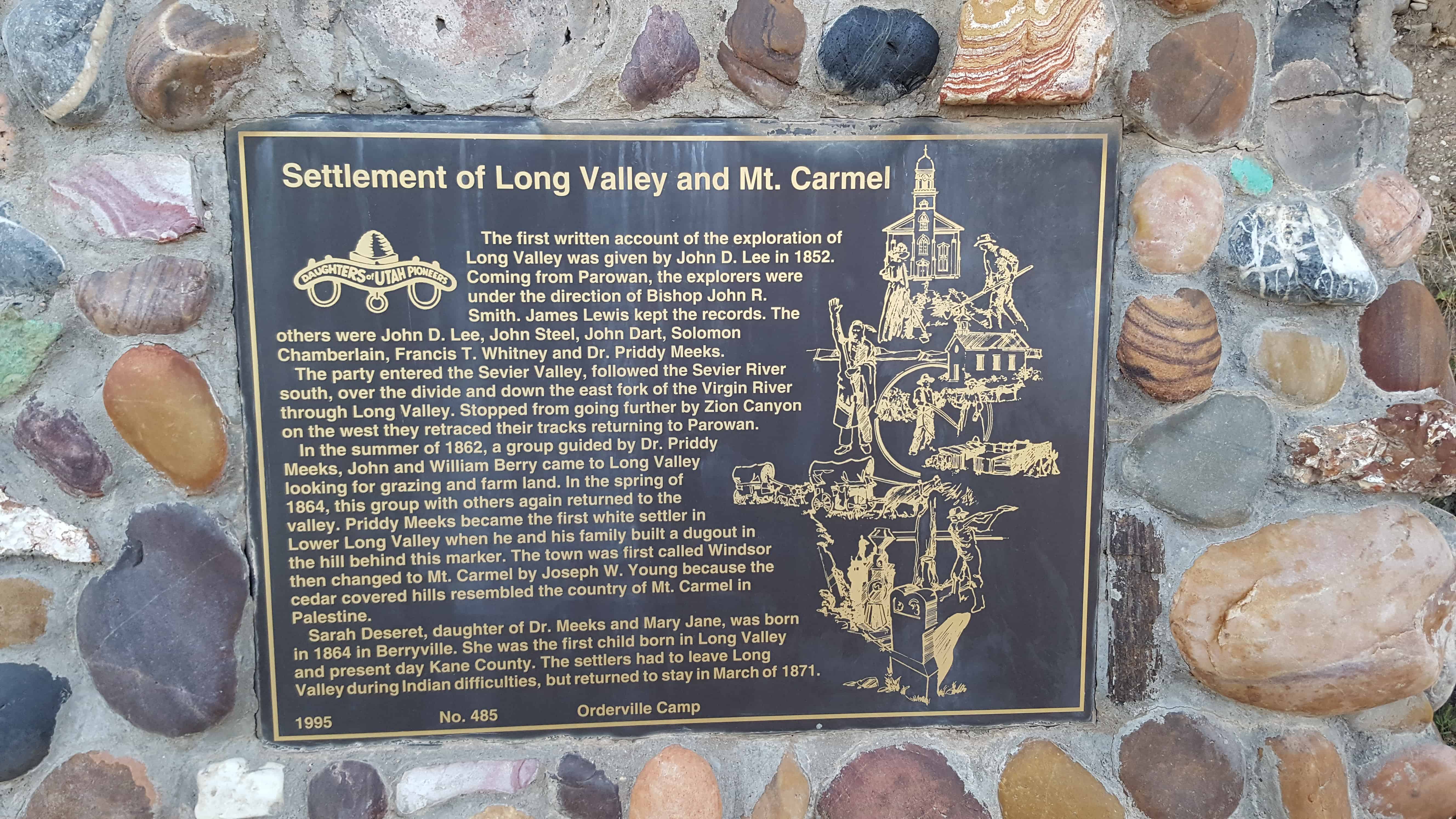 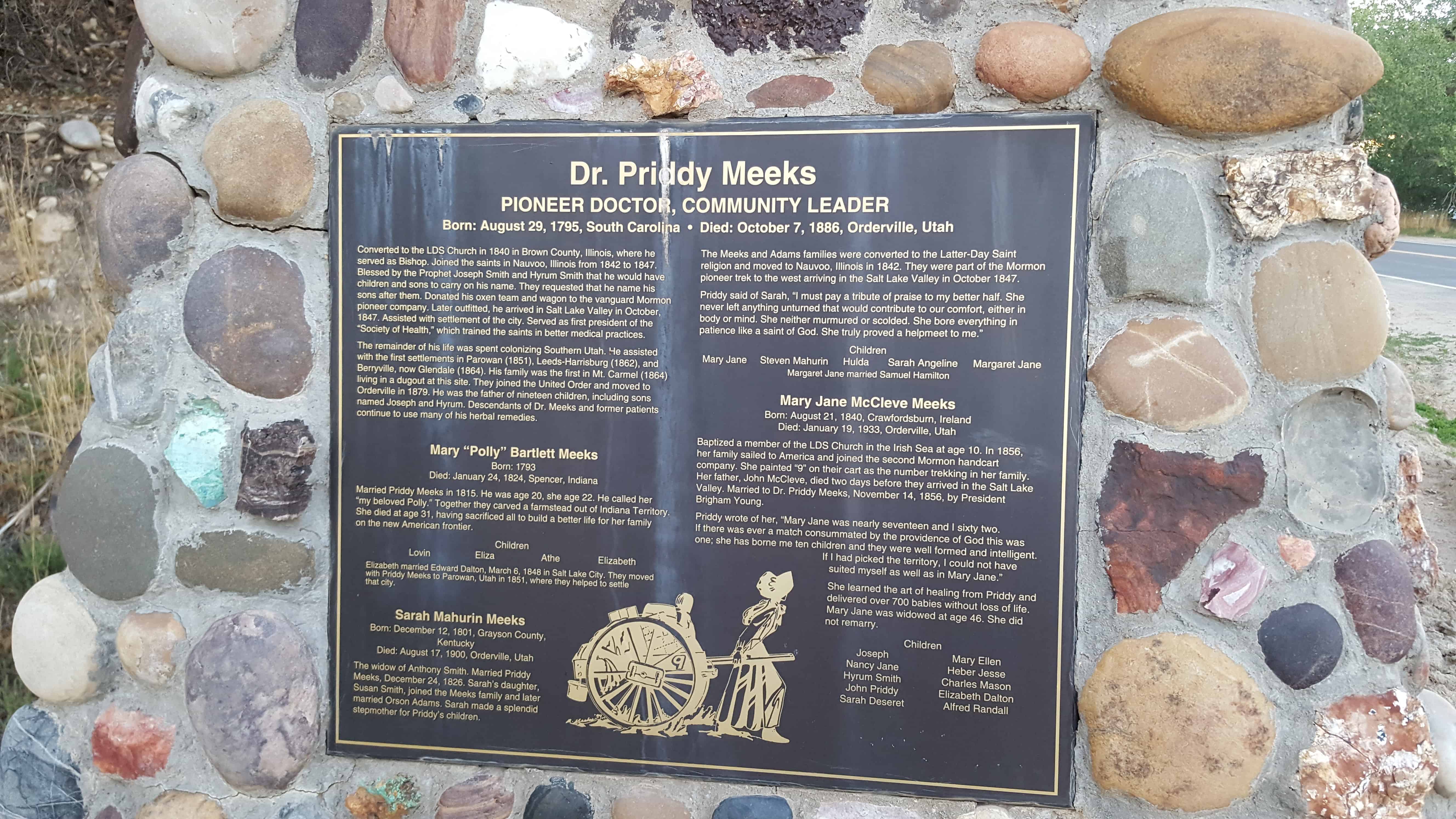 Converted to the LDS Church in 1840 in Brown County, Illinois where he served as Bishop. Joined the Saints at Nauvoo, Illinois from 1842 to 1847. Blessed by the Prophet Joseph Smith and Hyrum Smith that he would have children and sons to carry on his name. They requested that he name his sons after them. Donated his ox team and wagon to the vanguard Mormon pioneer company. Later outfitted, he arrived in Salt Lake Valley in October 1847. Assisted with settlement of the city. Served as first presidency of “Society of Health” which trained the saints in better medical practice.

The remainder of his life was spent in colonizing Southern Utah. He assisted in the first settlements in Parowan (1850), Leeds – Harrisburg (1862) and Berryville, now Glendale (1846). His family was the first in Mt. Carmel (1864) living in a dugout at this site. They joined the United Order and moved to Orderville in 1879. He was the father of nineteen children including sons named Joseph and Hyrum. Descendants of Dr. Meeks and former patients continue to use many of his herbal remedies.

Married Priddy Meeks in 1815. He was 20, she age 22. He called her “my beloved Polly”. Together they carved out a farmstead out of Indiana Territory. She died at age 31 having sacrificed all to build a better life for her family on the American Frontier.

Elizabeth married Edward Dalton, Marcy 6, 1848 in Salt Lake City. They moved with Priddy Meeks to Parowan, Utah in 1851, where they helped settle that city.

The Meeks and Adams family were converted to the LDS religion and moved to Nauvoo, Illinois in 1842. They were part of the Mormon pioneer trek to the West, arriving in Salt Lake Valley October 1847.

Priddy said of Sarah, “I must pay a tribute of praise for my ‘better half’. She never left anything unturned that would contribute to our comfort, either in body or mind. She neither murmured or scolded. She bore everything in patience like a Saint of God. She truly proved a helpmeet (sic) to me.”

Baptized a member of the LDS Church in the Irish Sea at age of 10. In 1856, her family sailed to America and joined the second Mormon Handcart Company. She painted “9” on their cart as the number trekking in her family. Her father, John McCleve, died two days before they arrived in the Salt Lake Valley. Married to Dr. Priddy Meeks, November 14, 1856, by President Brigham Young.

Priddy wrote of her “Mary Jane was nearly seventeen and I sixty-two. If there was ever a match consummated by the providence of God, this was one; she has borne me ten children and they were well formed and intelligent. If I had picked the territory, I could not have suited myself as well as in Mary Jane.”

She learned the art of healing from Priddy and delivered over 700 babies without loss of life. Mary Jane was widowed at age 46. She did not remarry.

In 1886-1887 after the United Order terminated, a public building was erected of native limestone and lumber from the canyon sawmill. It was used for school and church purposes. In 1938 a new schoolhouse was built and the old Rock Building given to the Daughters of Utah Pioneers for a relic hall. When the school board purchased the ground in March 1955 the building was torn down. This building is a replica and was erected from the same rocks and other materials. The United Order blacksmith shop was located on this site.

Located at 110 East State Street in Orderville, Utah at the D.U.P. Museum. 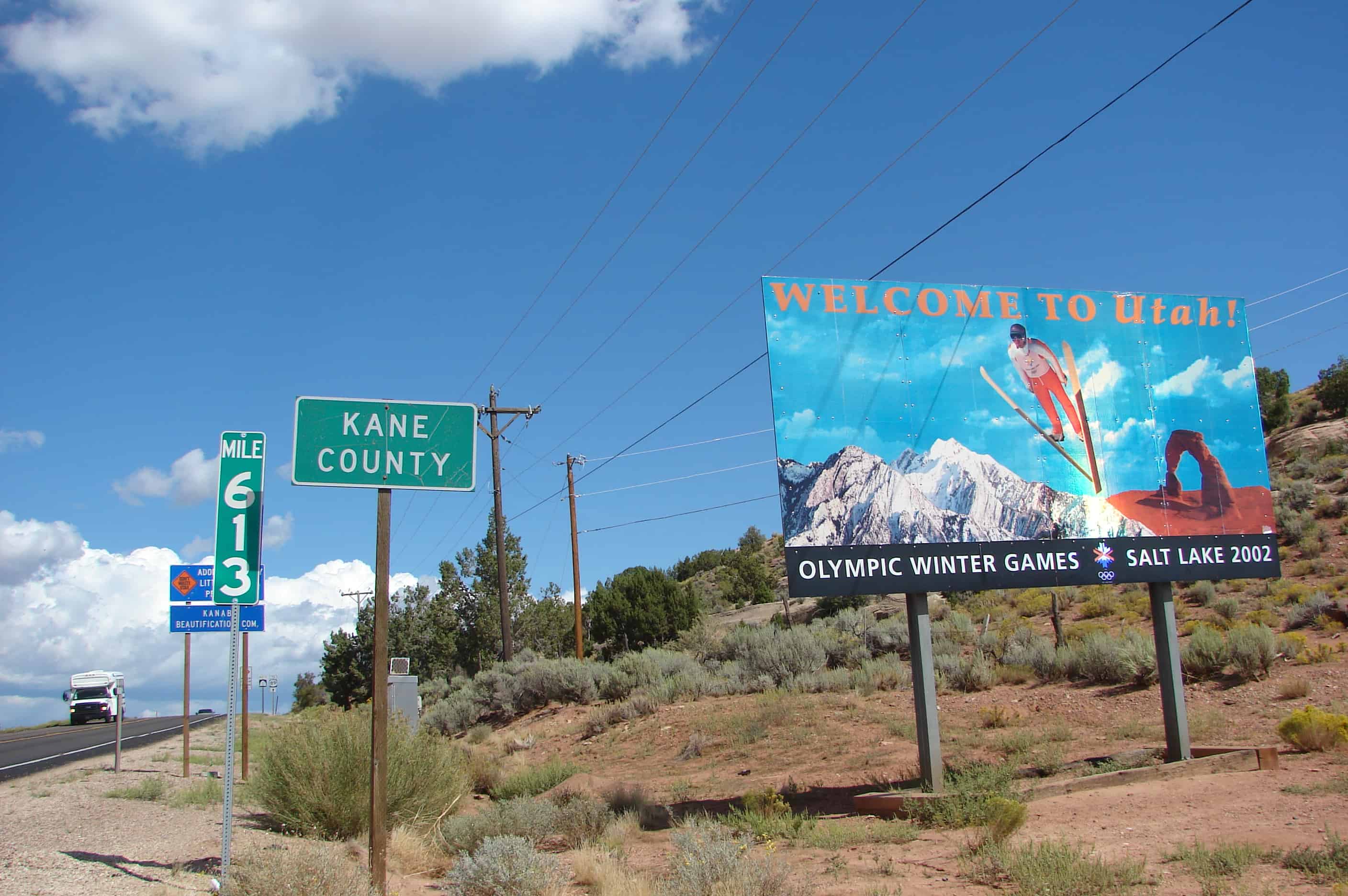 Here’s the link to my list of places in Utah.

Kane County, named for Col. Thomas L. Kane, a friend of the Mormon settlers. Its county seat and largest city is Kanab. 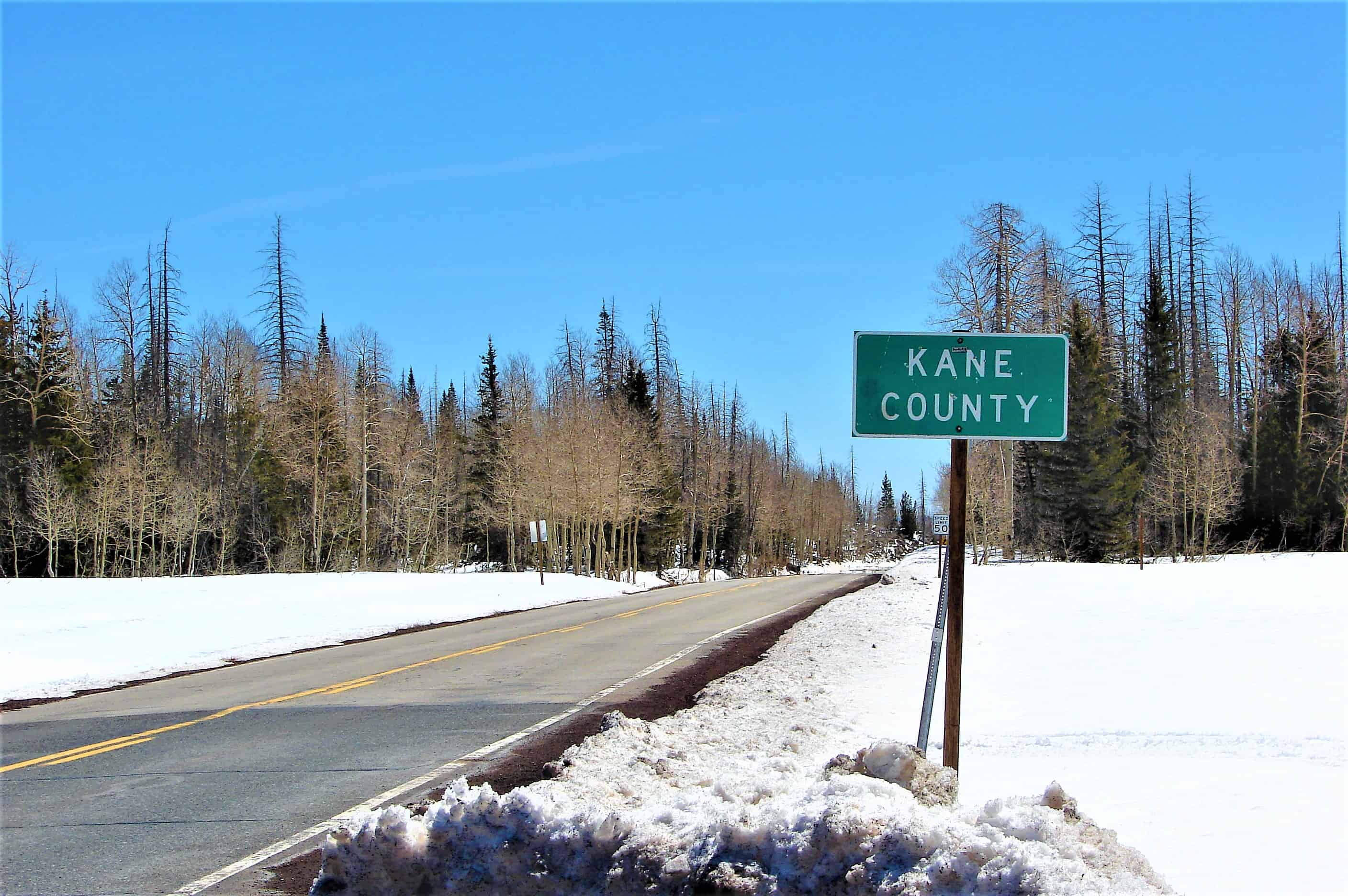 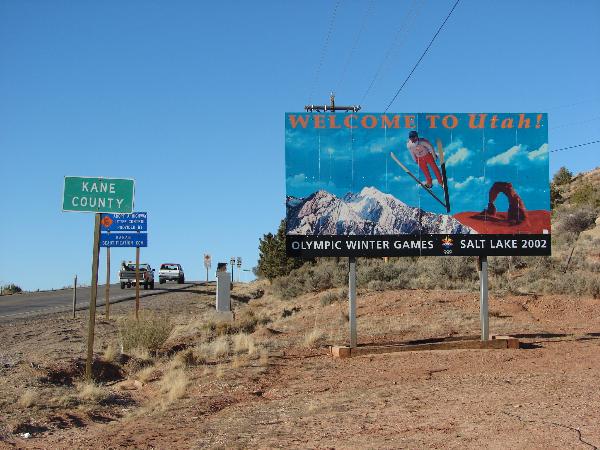 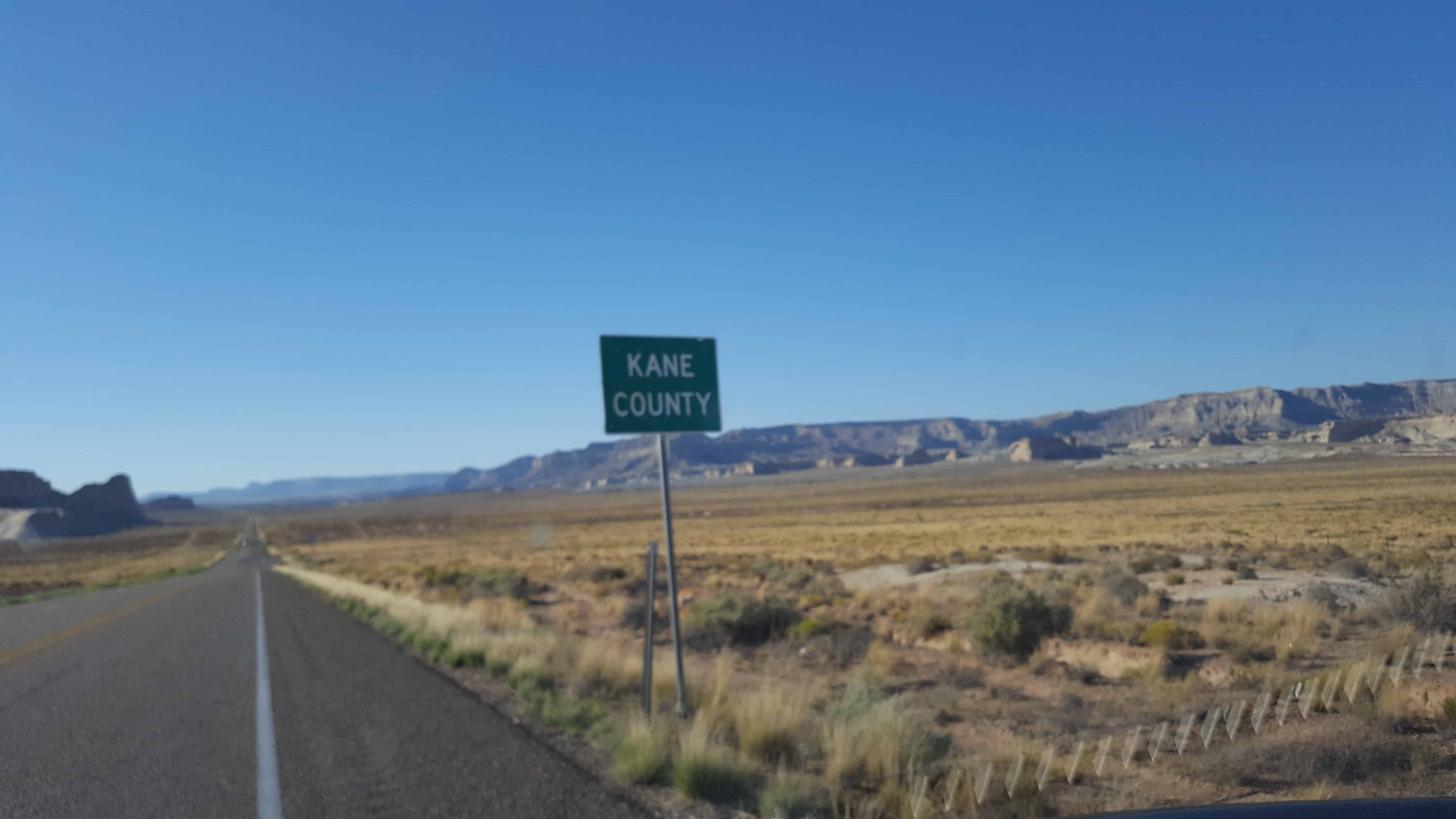 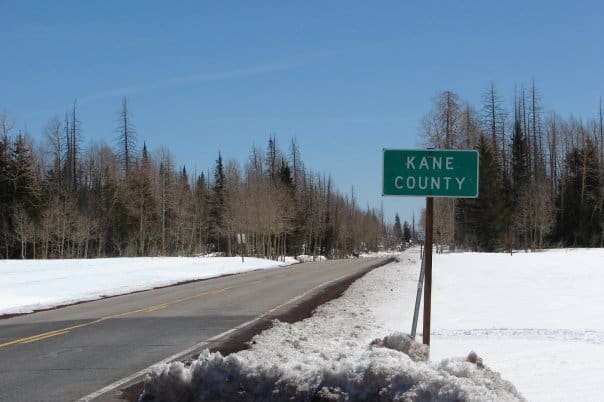 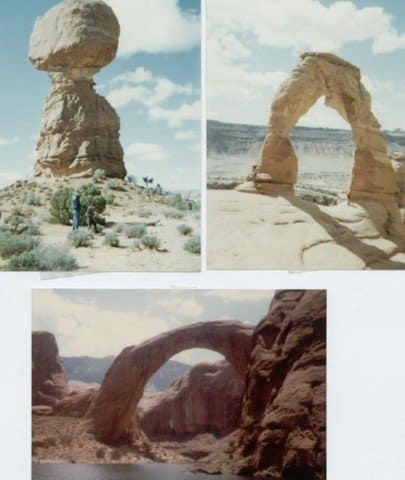 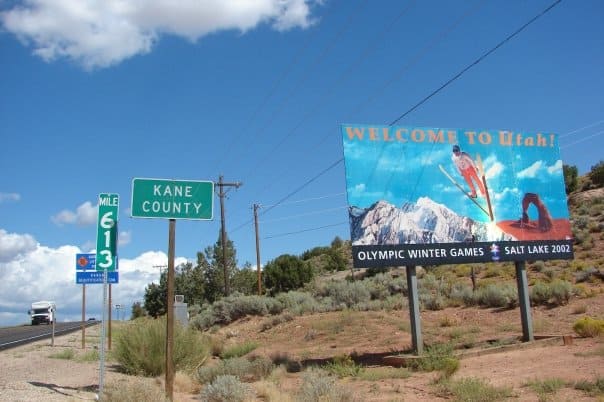 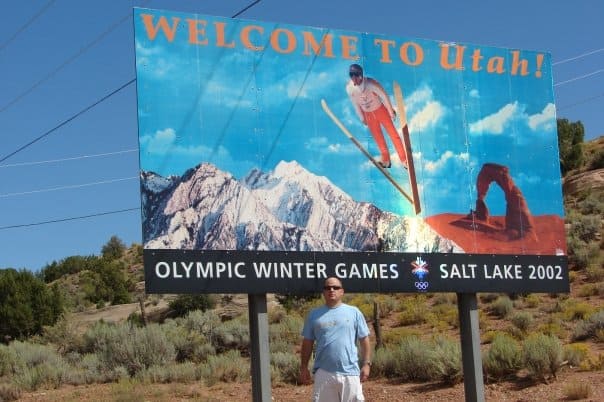 Big Water
Minutes from the shores of Lake Powell, Big Water is surrounded by some of the most spectacular scenery in the world.
Population*: 475
Elevation: 4,100 ft.
Incorporated: 1984

Glendale
Glendale is located on scenic Highway 89, at the northern end of Long Valley. An entrance to the Grand Staircase-Escalante National Monument is right in the center of town.
Population*: 381
Elevation: 5,800 ft.
Incorporated: 1935

Orderville
Orderville, initially established under the direct order of Brigham Young, has a rich history which is treasued by modern residents.
Population*: 577
Elevation: 5,250 ft.
Established: 1870