With a height of 325 feet from top of arch to canyon floor, supporting bridge lanes 1336 feet long, and reaching 549 feet across the canyon, these are the two longest concrete arch spans in the United States to date – a fitting memorial to one of Washington State’s most prominent citizens. 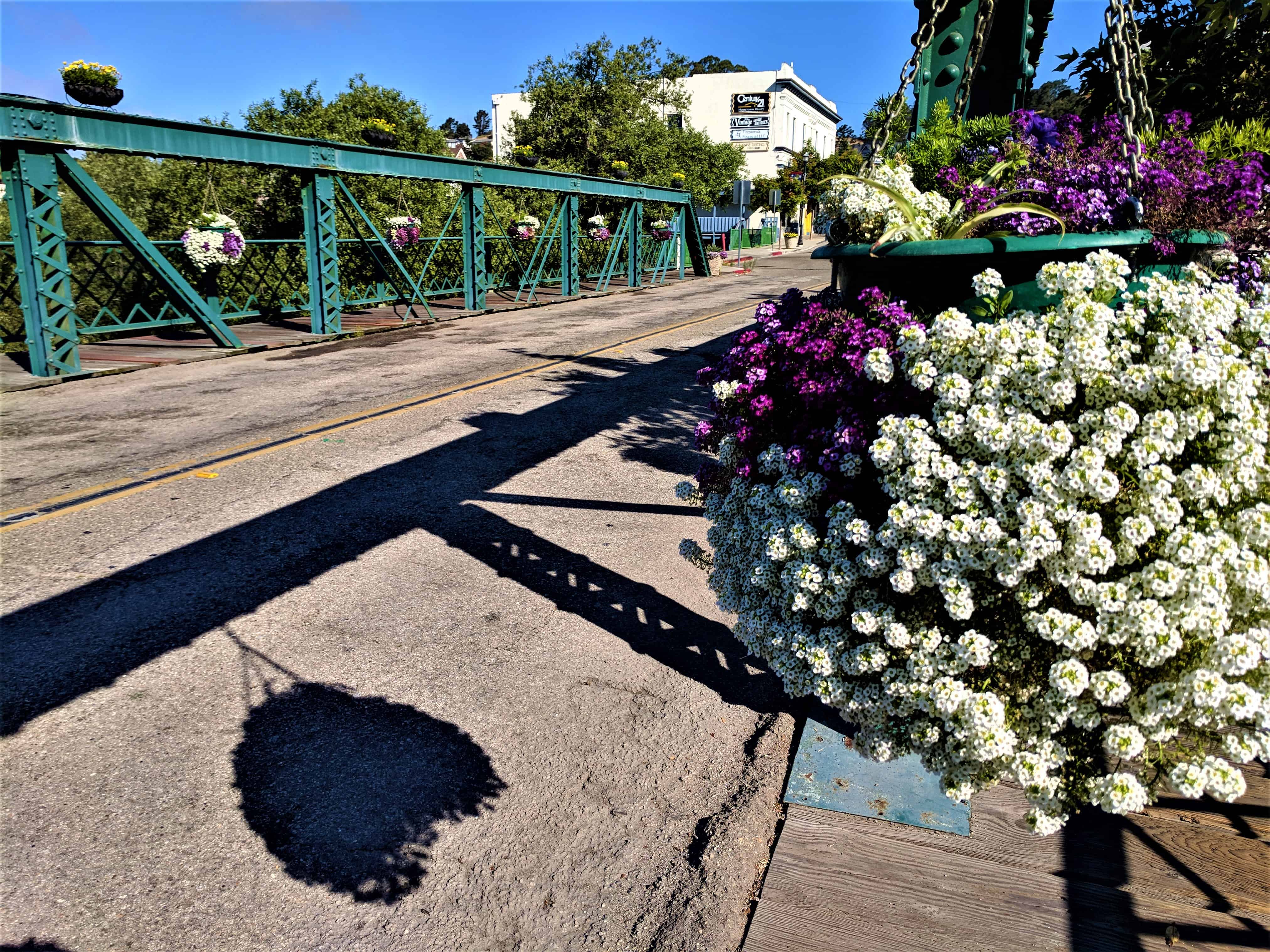 Built in 1908 this classic historic bridge is a gorgeous addition to the village. 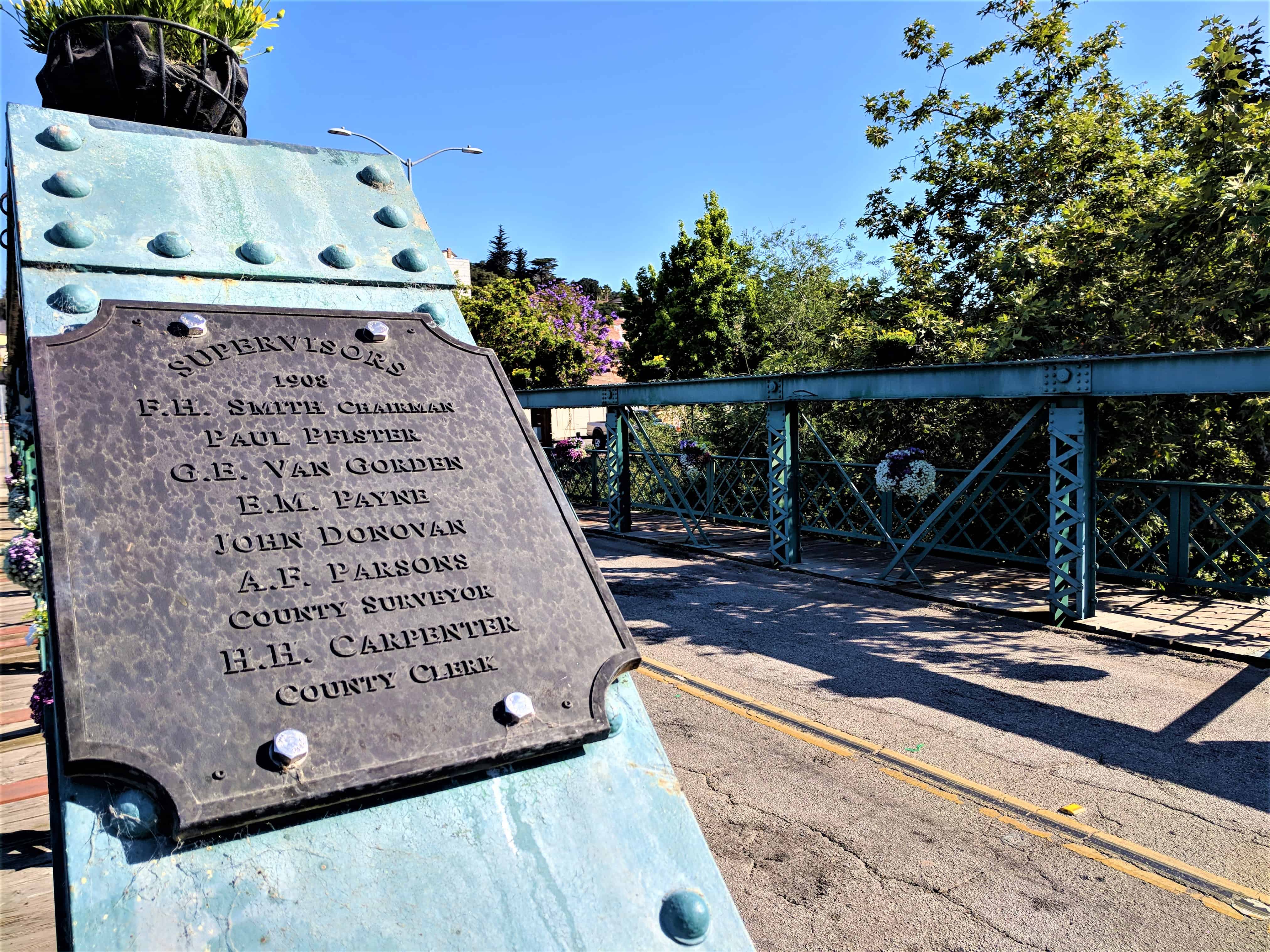 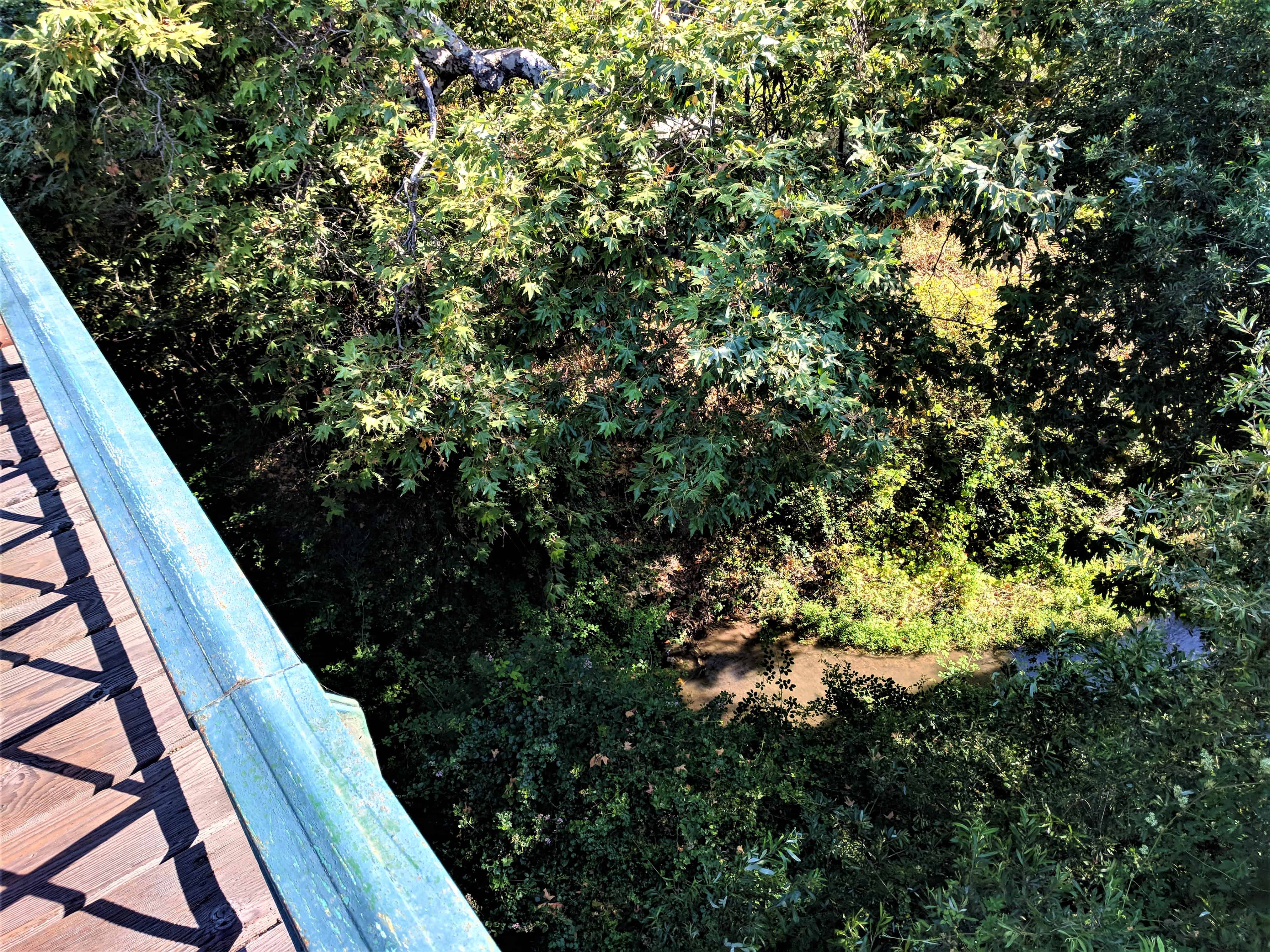 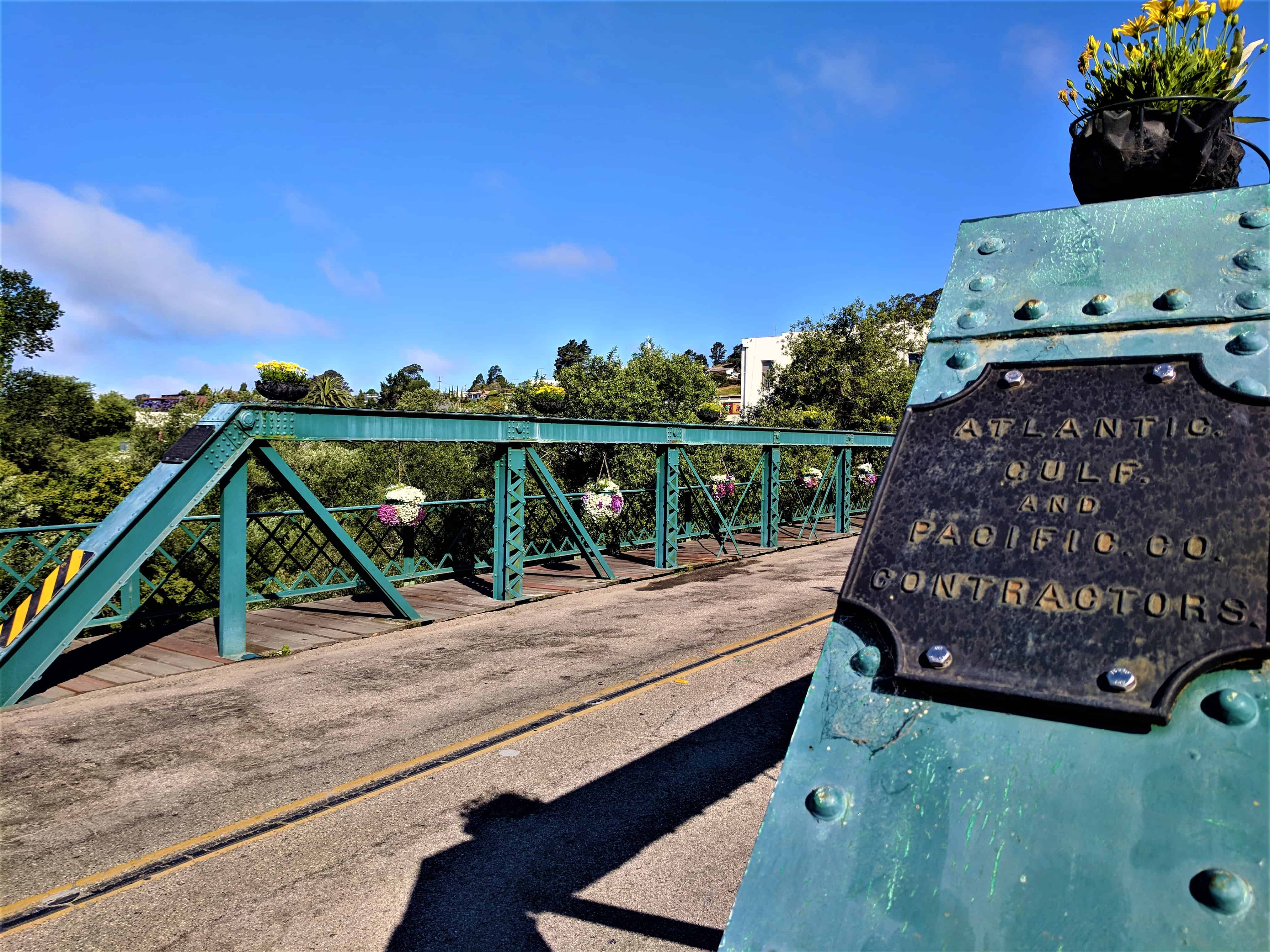 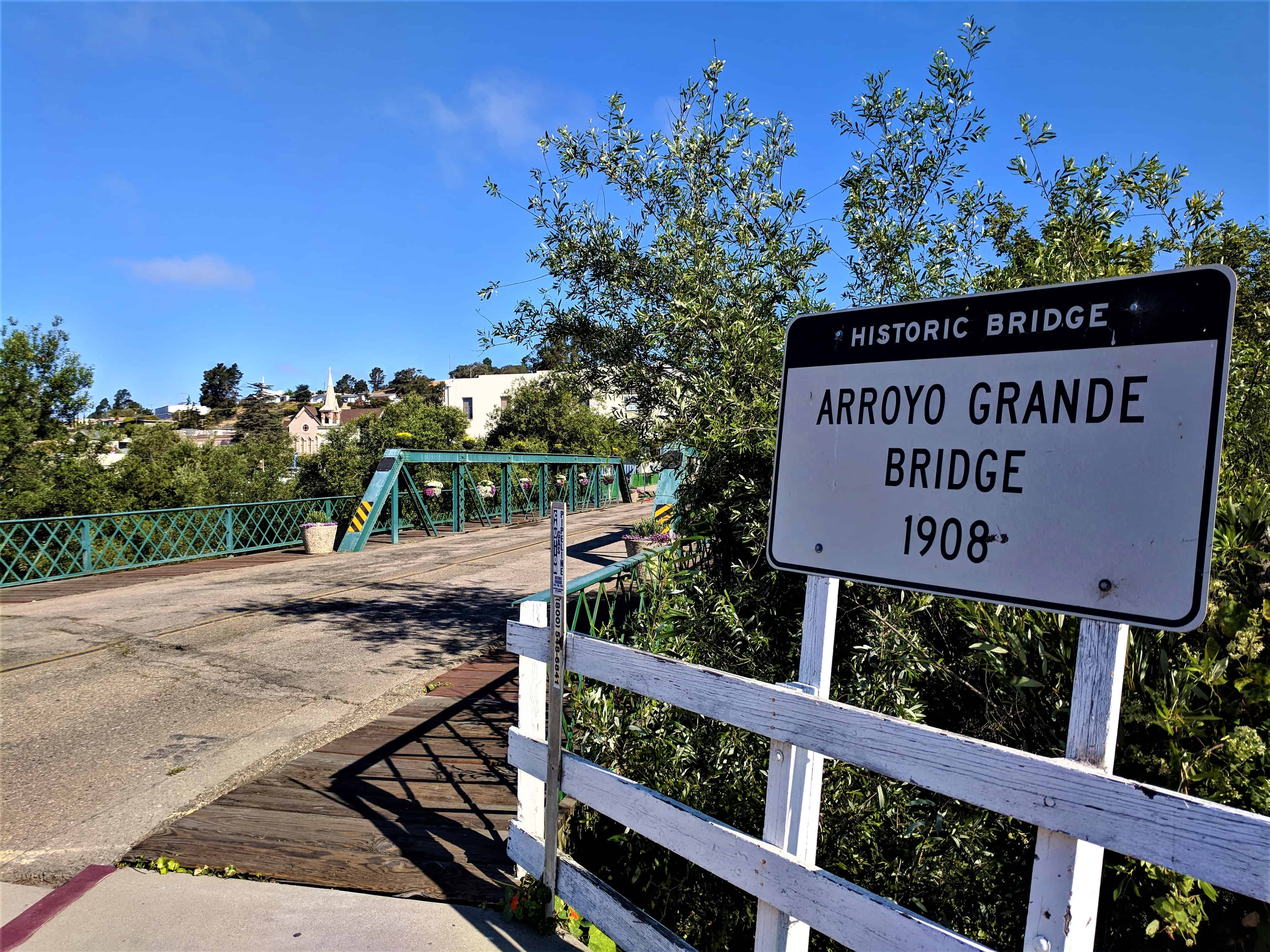 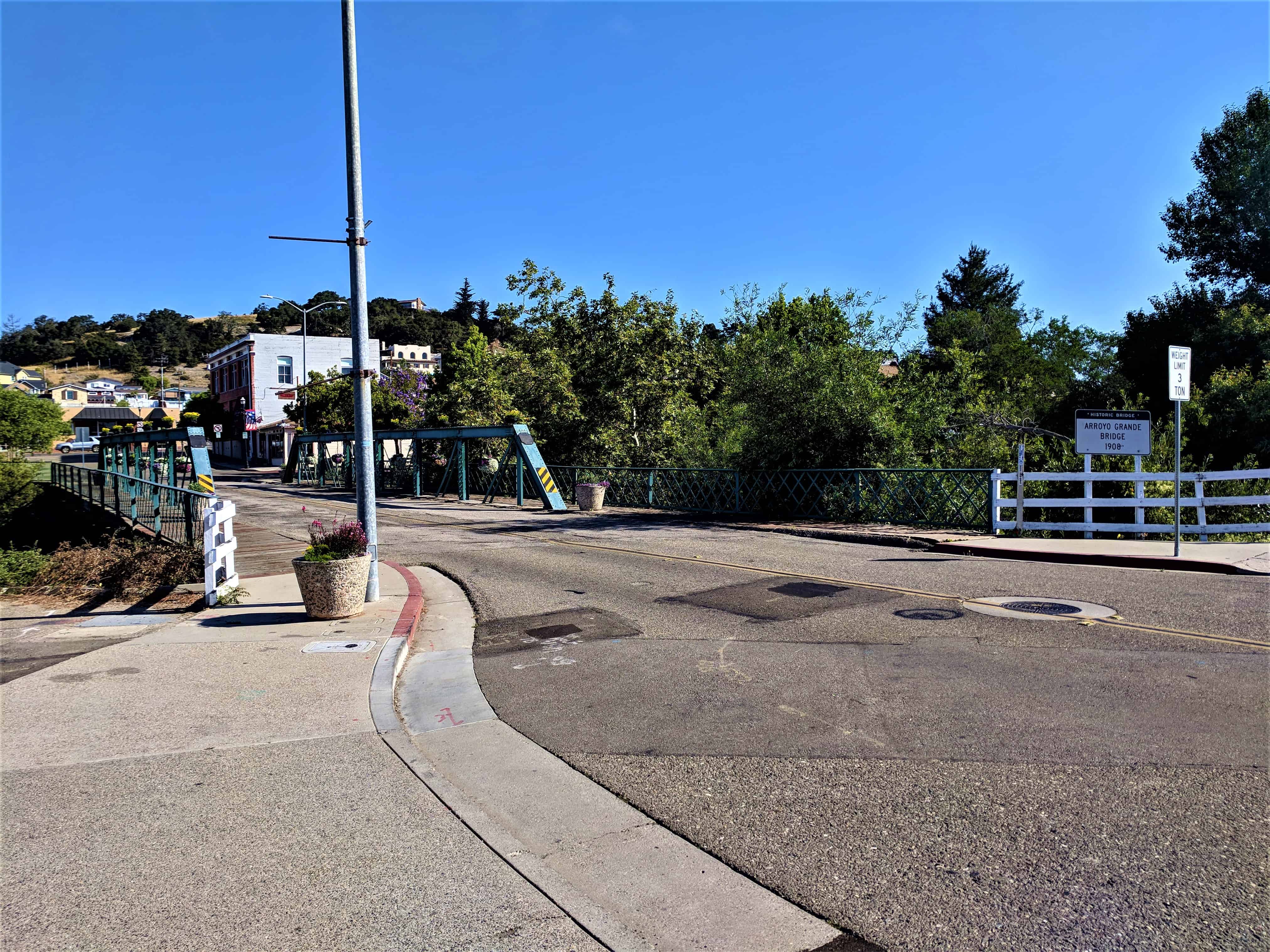 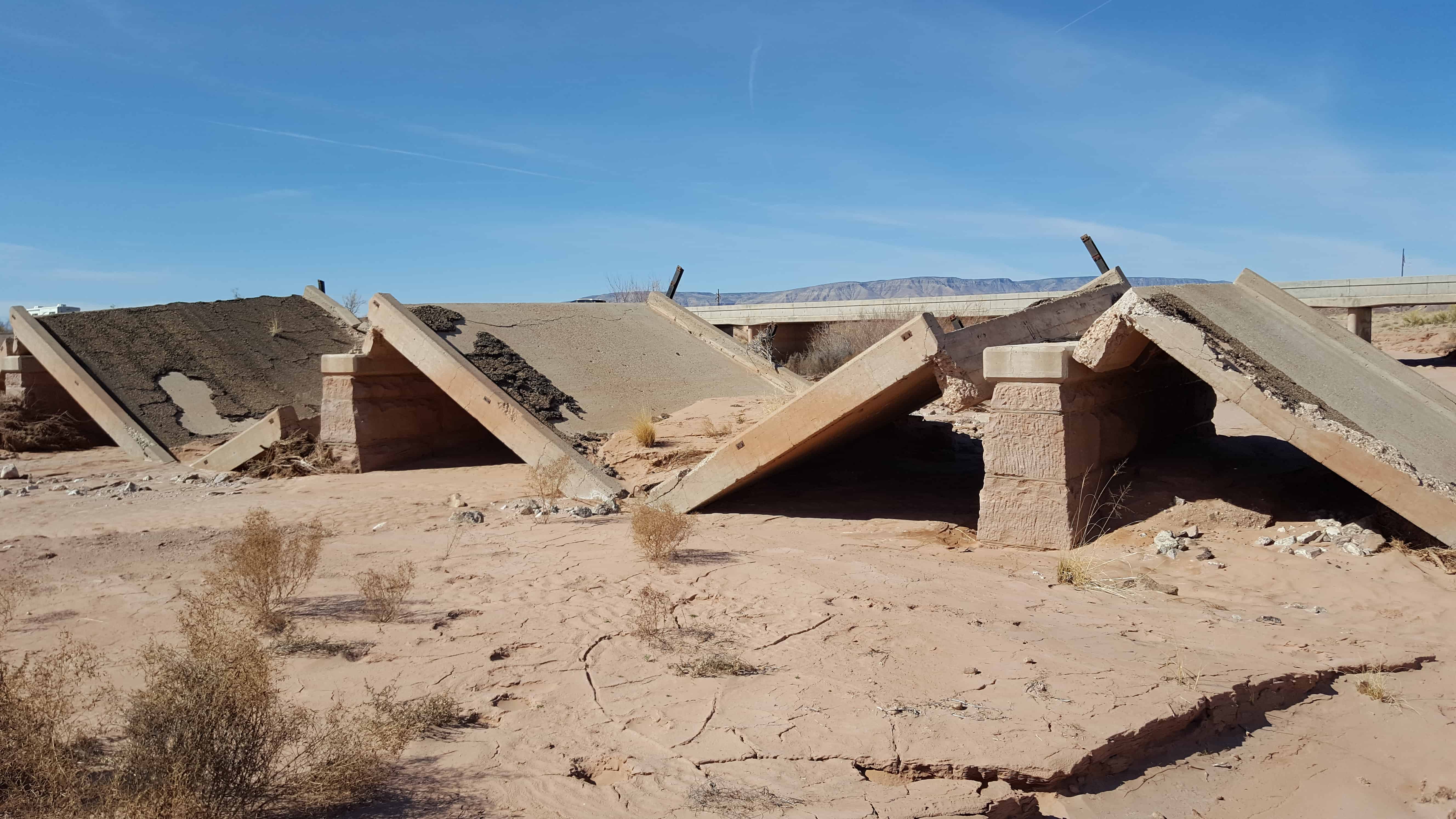 I thought this old bridge for the old highway next to the current highway 89 was pretty cool.  It is just north of Cameron. 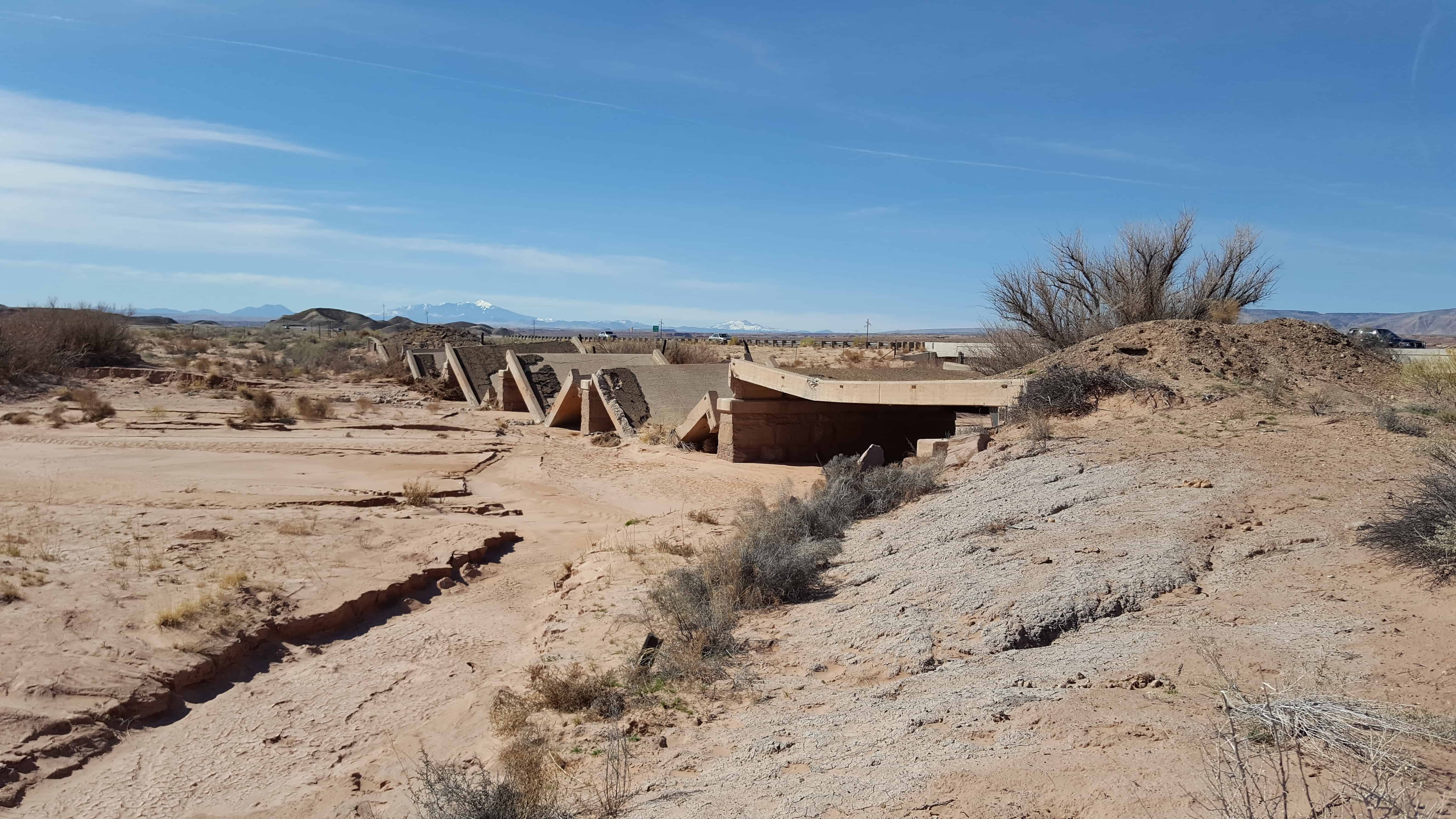 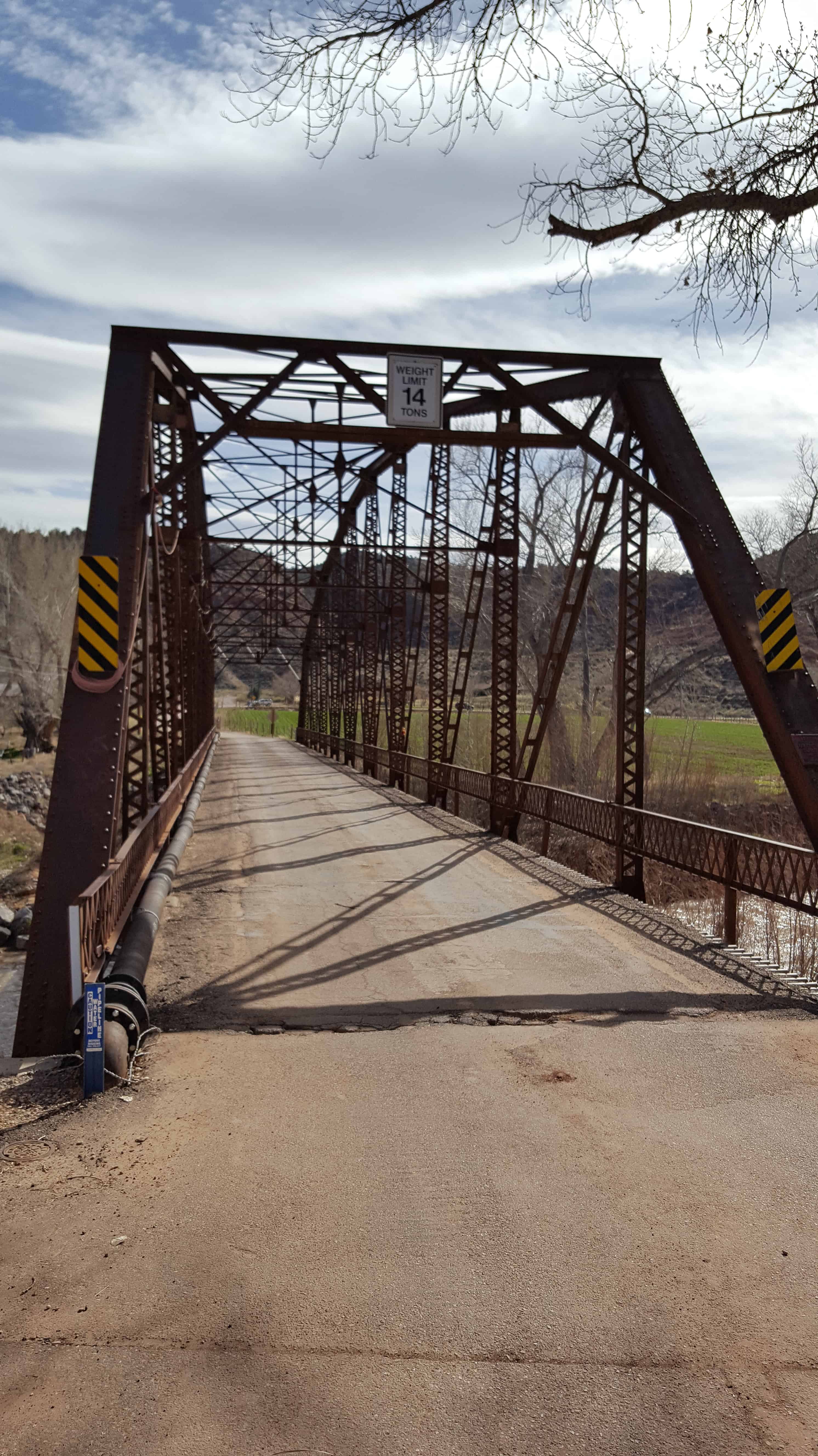 The Rockville Bridge spans the east fork of the Virgin River in Rockville. The bridge was built for the National Park Service in 1924 to provide a link between Zion National Park and the North Rim area of Grand Canyon National Park. The new bridge allowed motorists to take a circular tour of the national parks in southern Utah and northern Arizona. The Rockville route was superseded in 1928 by the construction of the Zion-Mount Carmel Highway.

The bridge was designed by the U.S. Bureau of Public Roads for the Park Service, fabricated by the Minneapolis Steel and Machinery Company, and erected by Ogden contractor C.F. Dinsmore. The bridge spans 217 feet in a single span, using a steel twelve-panel Parker through-truss.

The Rockville Bridge was placed on the National Register of Historic Places on August 4, 1995. 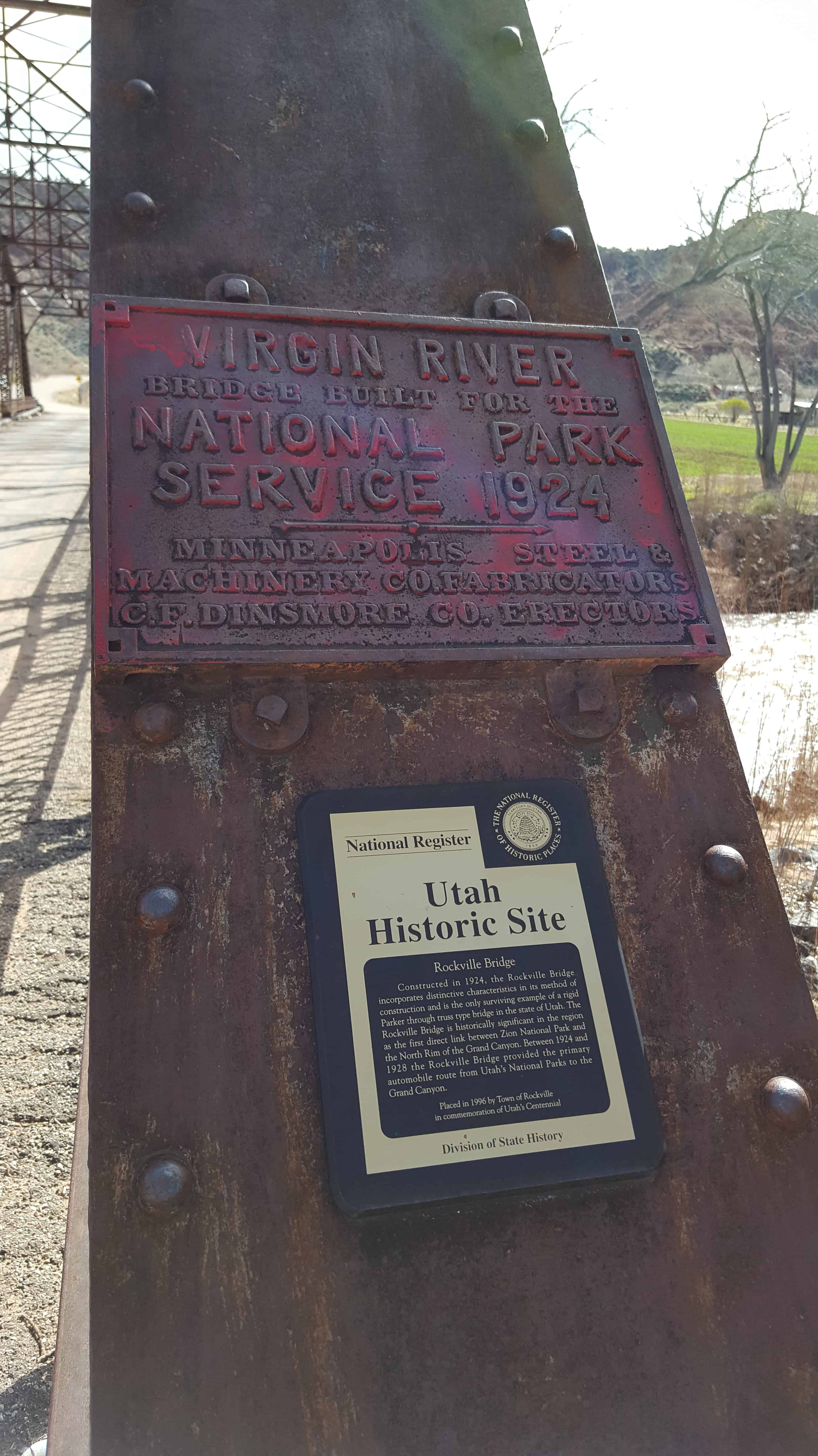 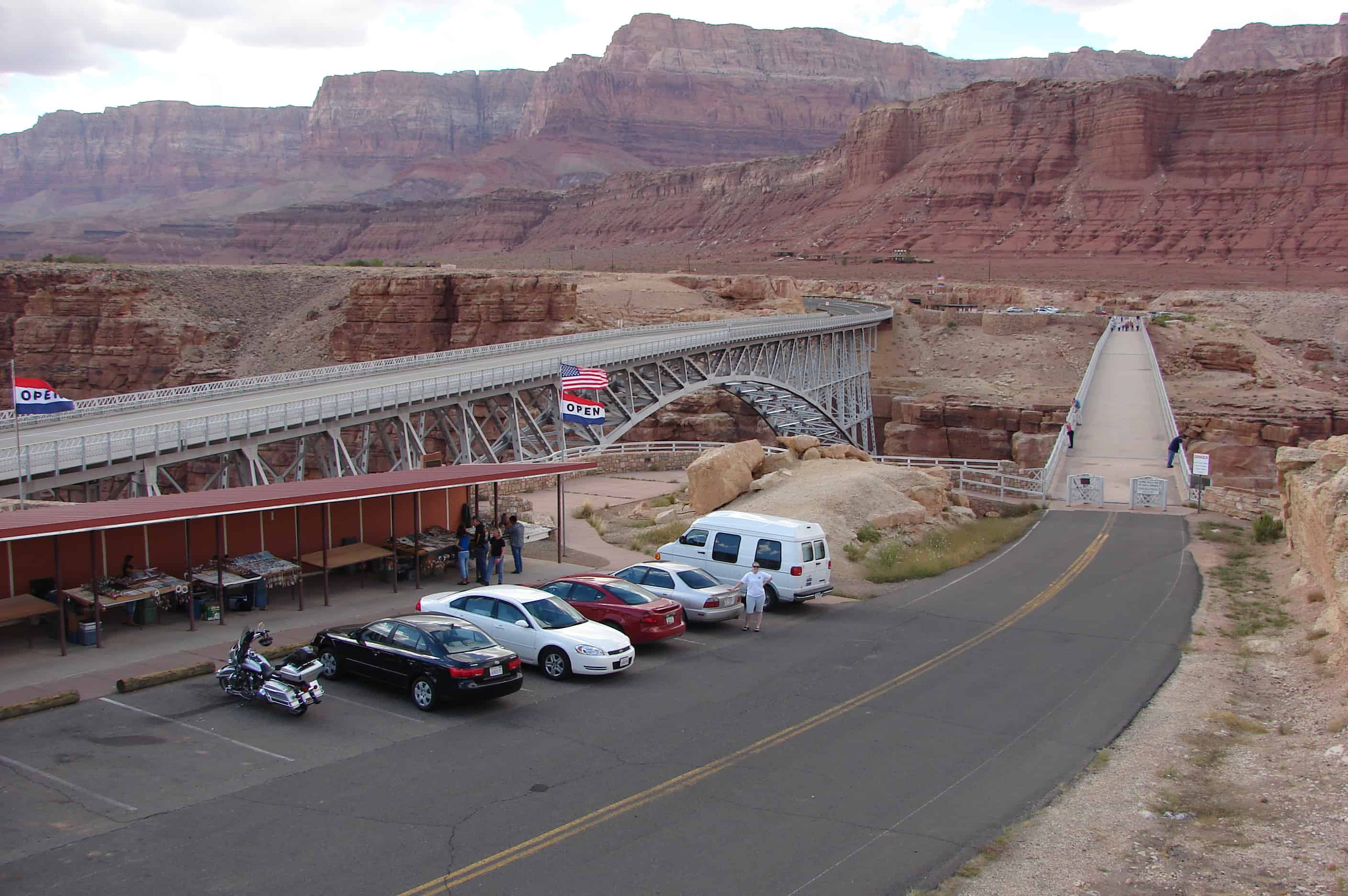 NAVAJO BRIDGE, sometimes called Marble Canyon or Grand Canyon Bridge, is the only highway bridge crossing the turbulent Colorado for approximately a thousand miles–from Boulder Dam to Moab, Utah. An engineering accomplishment and an object of great beauty, it is 834 feet long, has a single arch with a span of 616 feet, and measures 467 feet between its floor and the surface of the river–about the height of a forty-story building. Since its completion in 1929 the bridge as superseded the old Lee’s Ferry nearby.
The Colorado River is the western boundary of the Navajo Reservation, largest in the United States.

Since the American Guide was published, a second bridge was built to withstand today’s traffic, the original bridge is now only open to pedestrians, and a visitor’s center replaced the rest area. 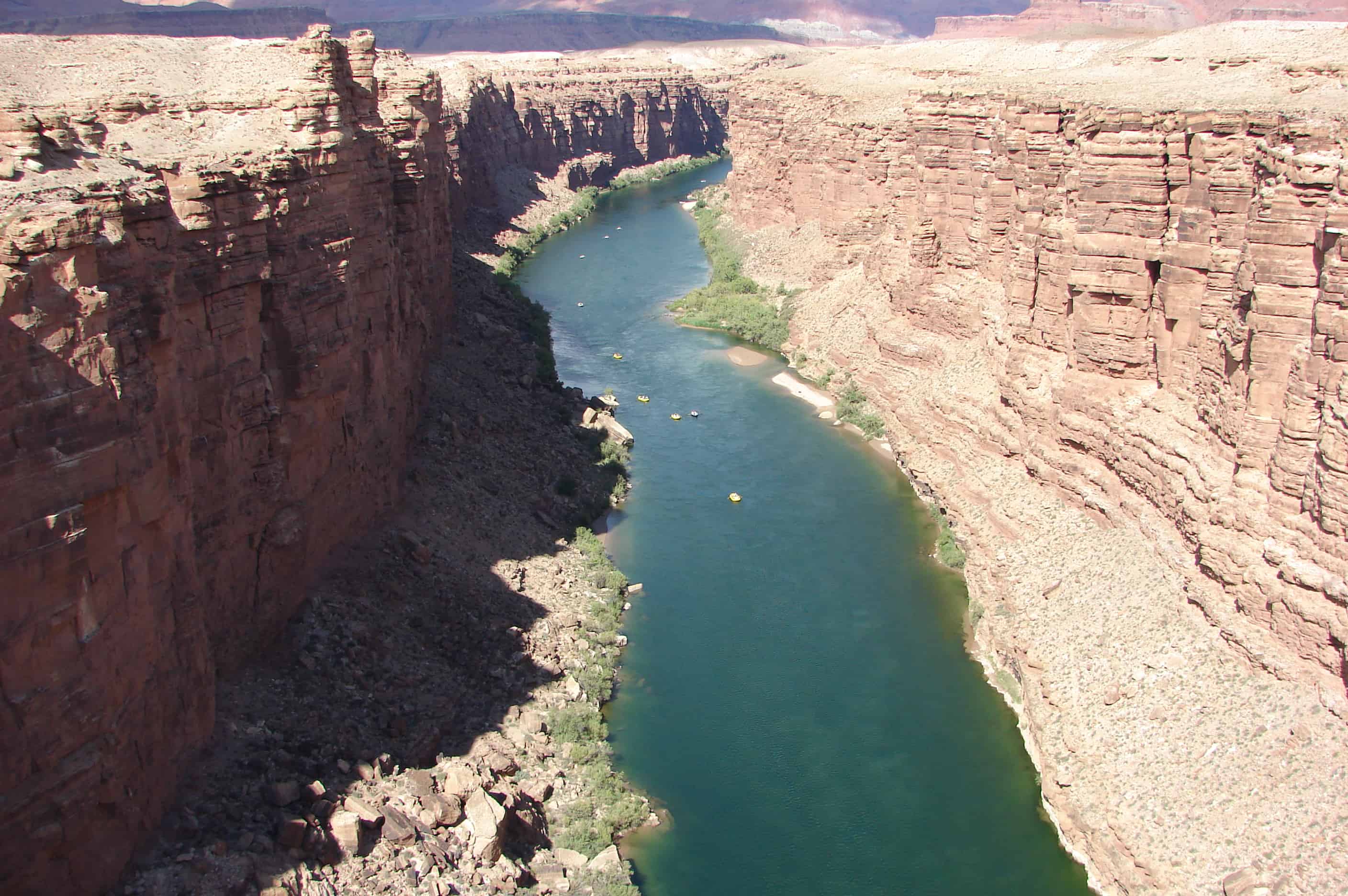 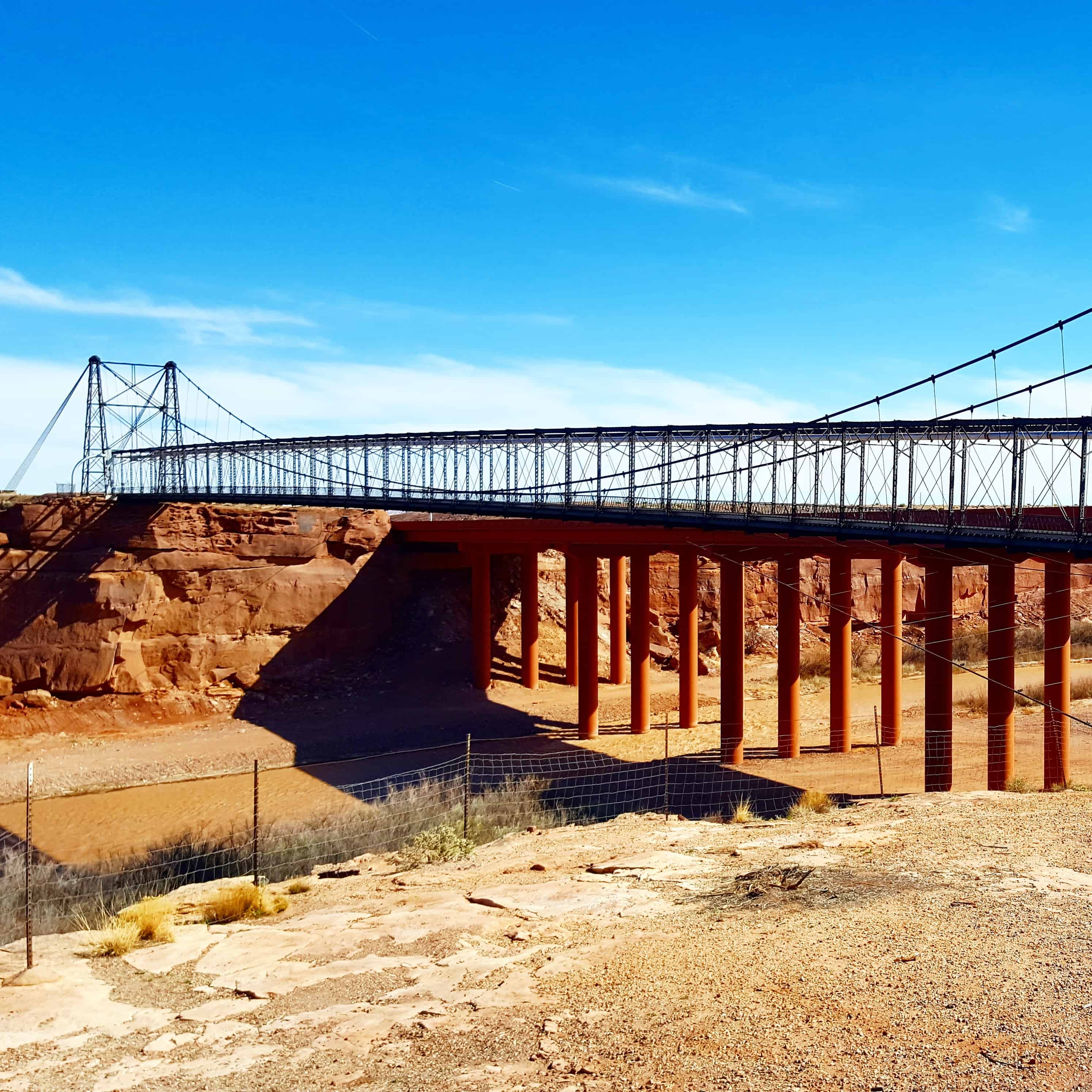 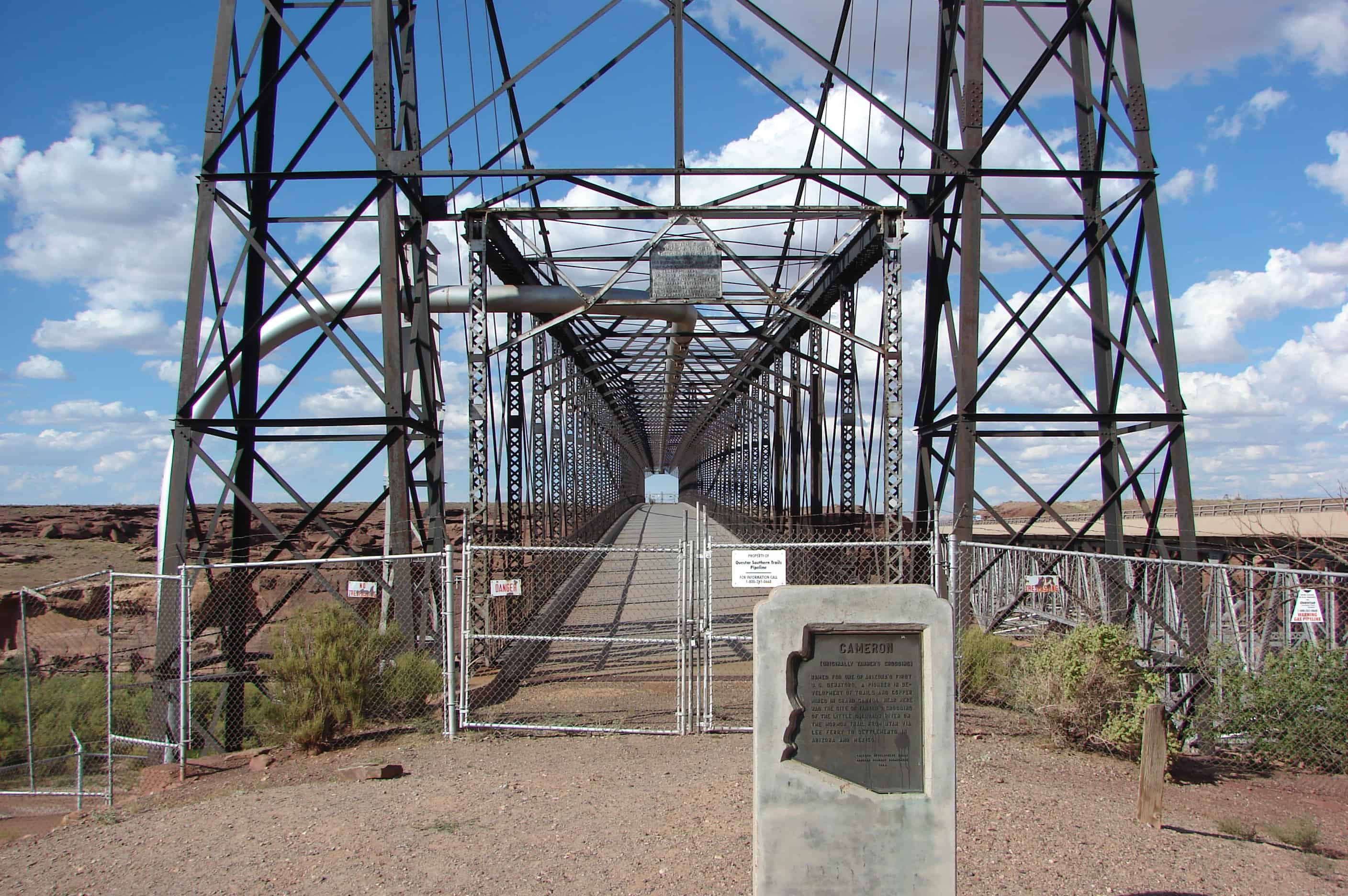 Named for one of Arizona’s first U.S. Senators. A pioneer in development of trails and copper mines in Grand Canyon. Near here was the site of Tanner’s Crossing of the Little Colorado River on The Mormon Trail from Utah via Lee Ferry to settlements in Arizona and Mexico.

The Longest Wooden Suspension Bridge in Utah, in Dewey.  The classic, historic bridge was burned in 2008 and replaced.

The Dewey Bridge, constructed in 1916, is on the National Register of Historic Places. In its prime it was designed to support the weight of 6 horses, 3 wagons and 9000 pounds of freight. It is significant for its outstanding Engineering Accomplishment and for its Historic role as a vital transportation and commercial link connecting Southeastern Utah with Colorado and other points east. In the early decades of the twentieth century, Moab and other Southeastern Utah towns were dependent on communities in Western Colorado for everyday supplies, and markets for their agricultural products. This Bridge, which spans the formidable natural barrier of the Colorado River, was the first to provide a direct connection. Dewey Bridge is Utah’s longest suspension bridge, and at the time of its construction, was the second longest suspension bridge west of the Mississippi. It is also the State’s longest clear span bridge. 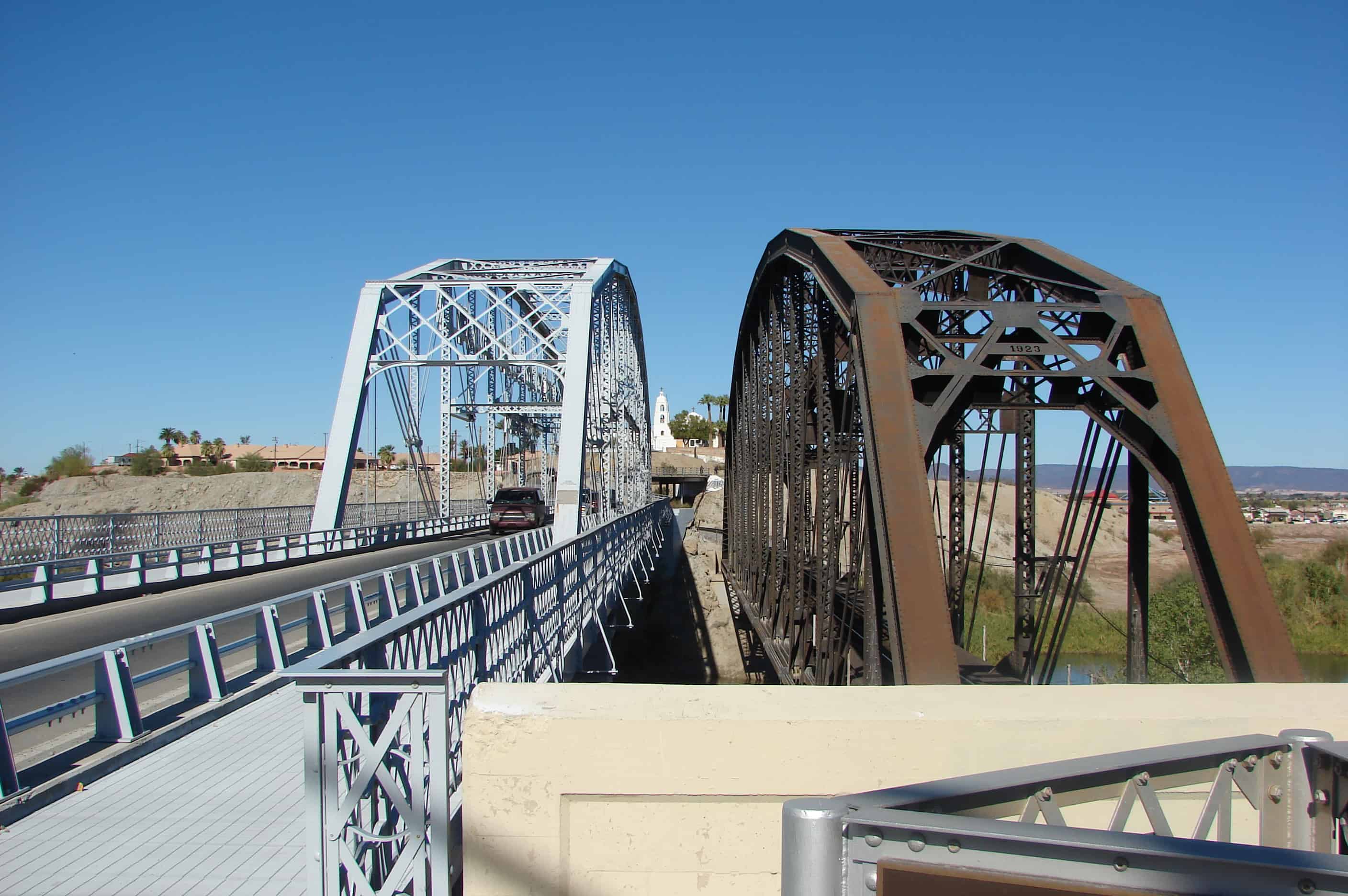 The bridge was constructed in 1915 through a joint effort between the Office of Indian Affairs and the states of California, Arizona and New Mexico to promote traffic along the Ocean-to-Ocean Highway. The bridge was the only one over the Colorado for 1,200 miles. The bridge has no center pillar because of the Colorado River potential roughness.

During the 1930s, California California erected a checkpoint on their side to prevent jobless Oakies and Arkies from entering.

The bridge stopped operations in 1988. In 2002 it reopened to one way traffic only. The Ocean-to-Ocean Highway Yuma” sign was restored and is illuminated at night. 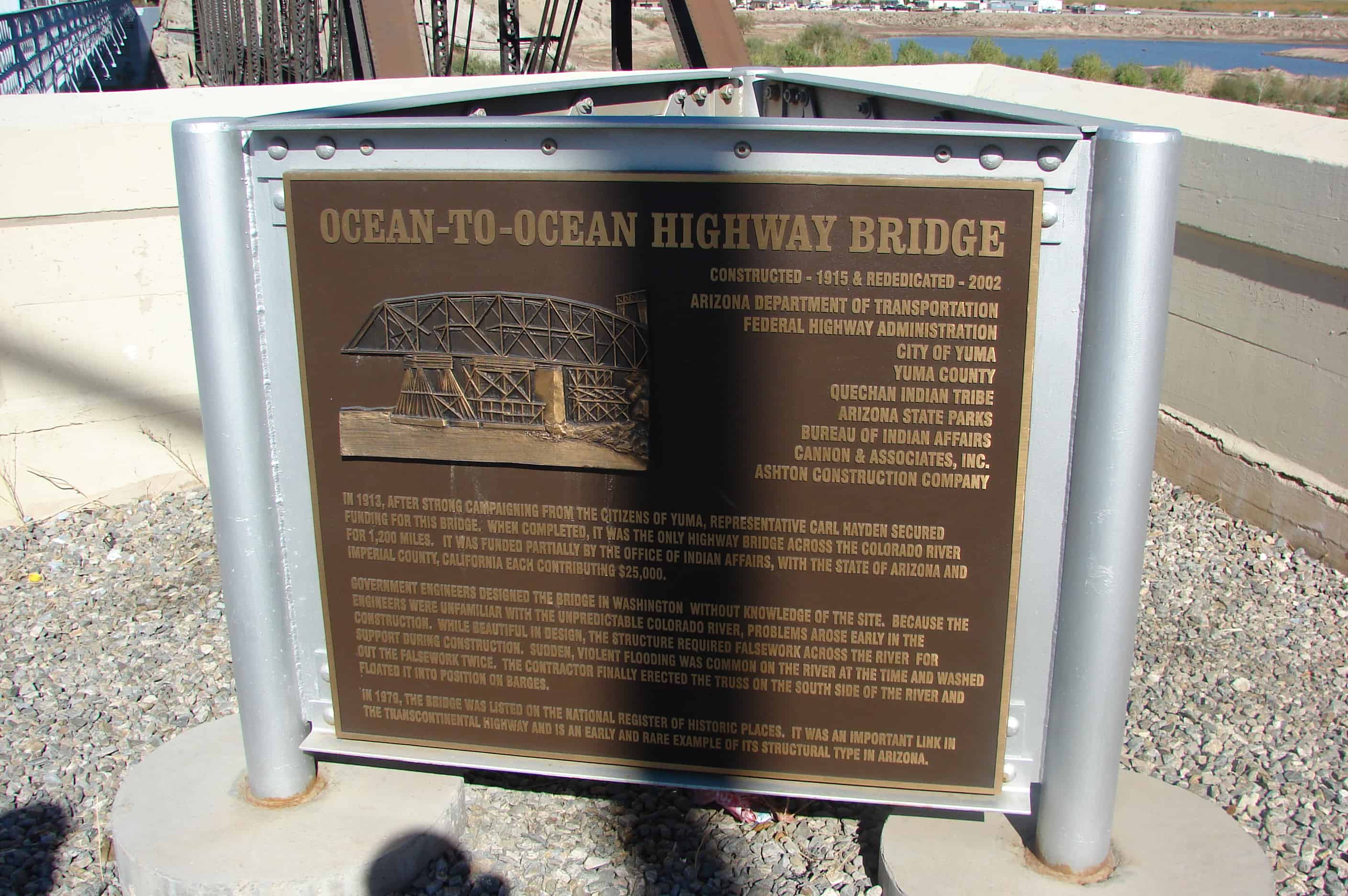 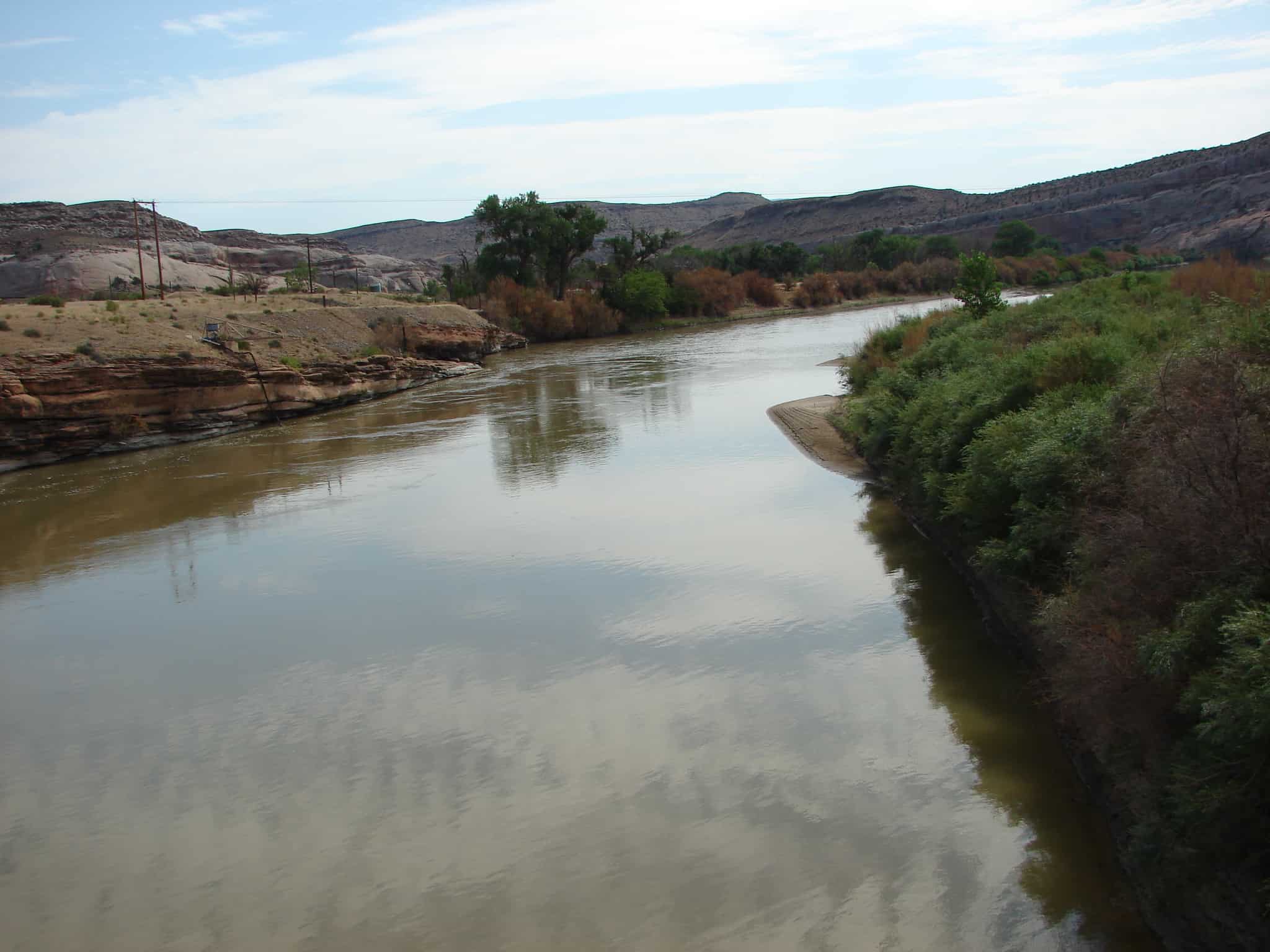 Dewey is a ghost town. Originally named Kingsferry, it began in the 1880s when Samuel King built and operated a ferry across the Grand River (now considered part of the Colorado River). A small community soon developed around the ferry. The town served as a ferry crossing until the Dewey Bridge was constructed in 1916.