Elder George A. Smith called several strong families to travel south of Salt Lake City to settle Palmyra. He counseled them to build a fort for protection to ensure their safety from the local Indians. These stalwart pioneers enclosed a 10-acre square with 10-foot walls. The task of cutting mud blocks, making adobe bricks and building the fort was great. Each family had a small house made with the bricks, which formed the outer walls of the fort; the doors faced the center. Inside, the corral stockade kept the livestock safe. Some families moved into the fort upon completion in 1852. Other families arrived after the Walker War broke out one year later. The meetinghouse was used for church and school. During the winter of 1853-1854, having been joined by settlers from the Upper Settlement (now known as Spanish Fork), the population at Fort Palmyra numbered 404.

A peaceful resolution brought the Walker War to a close in August 1854. Brigham Young counseled the pioneers to move to the Upper Settlement, where there was better farmland. Fort Palmyra was dismantled and the adobe bricks were taken with them to rebuild the buildings they would need to survive. These brave, stalwart pioneer men, women and children built, then totally dismantled their homes and fort in the space of three years and rebuilt new homes in the second settlement.

In January 1855, the Territorial Legislature granted Fort Palmyra/Fort St. Luke, a city charter, allowing the government to rename the city ‘Spanish Fork.’ In 1880, many settlers moved back to Palmyra and built a new meetinghouse that served as a church and a school.

This pump house has been a favorite for people who like ghost stories and haunted things in the area for as long as I can remember. A lot of websites call it the Benjamin Pump House even though I think it’s technically between Lake Shore and Palmyra.

These pump houses are for irrigation water and aren’t that uncommon, but the fact that so many kids talk about made me want to at least document it.

There are haunted places websites talking about a man getting caught in a machine and dying and another man trying to get him out and getting his arm caught and also dying. They also say there are unexplained lights and noises at night.

Settled by Mormon pioneers in 1851. A Branch of The Church of Jesus Christ of Latter-day Saints was organized on December 21, 1851 with William Pace as Bishop. Because of trouble with the Indians, a fort was built in 1853. As the mineral began to rise on the farmland, and upon the advice of President Brigham Young, the settlers moved in 1856 to the Upper Settlement (now known as Spanish Fork). Settlers began to move back to Palmyra and building homes in the mid-1870’s. In 1891, Palmyra was known as the North Branch under the leadership of Bishop Marinus Larsen, Bishop of the Spanish Fork Third Ward. Palmyra became an independent ward on August 11, 1901. A.T. Money was called to be Bishop. Boundaries of the ward were east to Spanish Fork, North to Utah Lake, West to the Spanish Fork River and South to Lake Shore.

This cool looking home in Leland, Utah was part of the movie “Made Men” and is also mentioned on several websites that list haunted sites, there are some stories of murders that may have happened in there.(this is inaccurate)

William Parry Bowen and Ruth Jones were children when their parents came to Utah in 1856 with the John Hunt Wagon Train. They married and lived in this home. Their eldest daughter, Mary Eleanor Bowen married Lars Peter Larsen and their family lived in the home.

The county records show ownership being back and forth with Larsen’s and Moran’s since 1980. I’ve been seeing if I can dig up any good history about the place, it looks like it would have a lot.

“The home was built by William Perry Bowen and his wife Ruth Jones Bowen. They later traded homes with their daughter Mary Eleanor and her husband Lars Peter Larsen because they had a very large family and the Bowen’s children were grown.” – Rex Larsen

I saw Eric Meyer share this photo on facebook saying that his Great Great Grand Father William Perry Bowen built this house in the 1850’s or so. It had been known as The Big House. 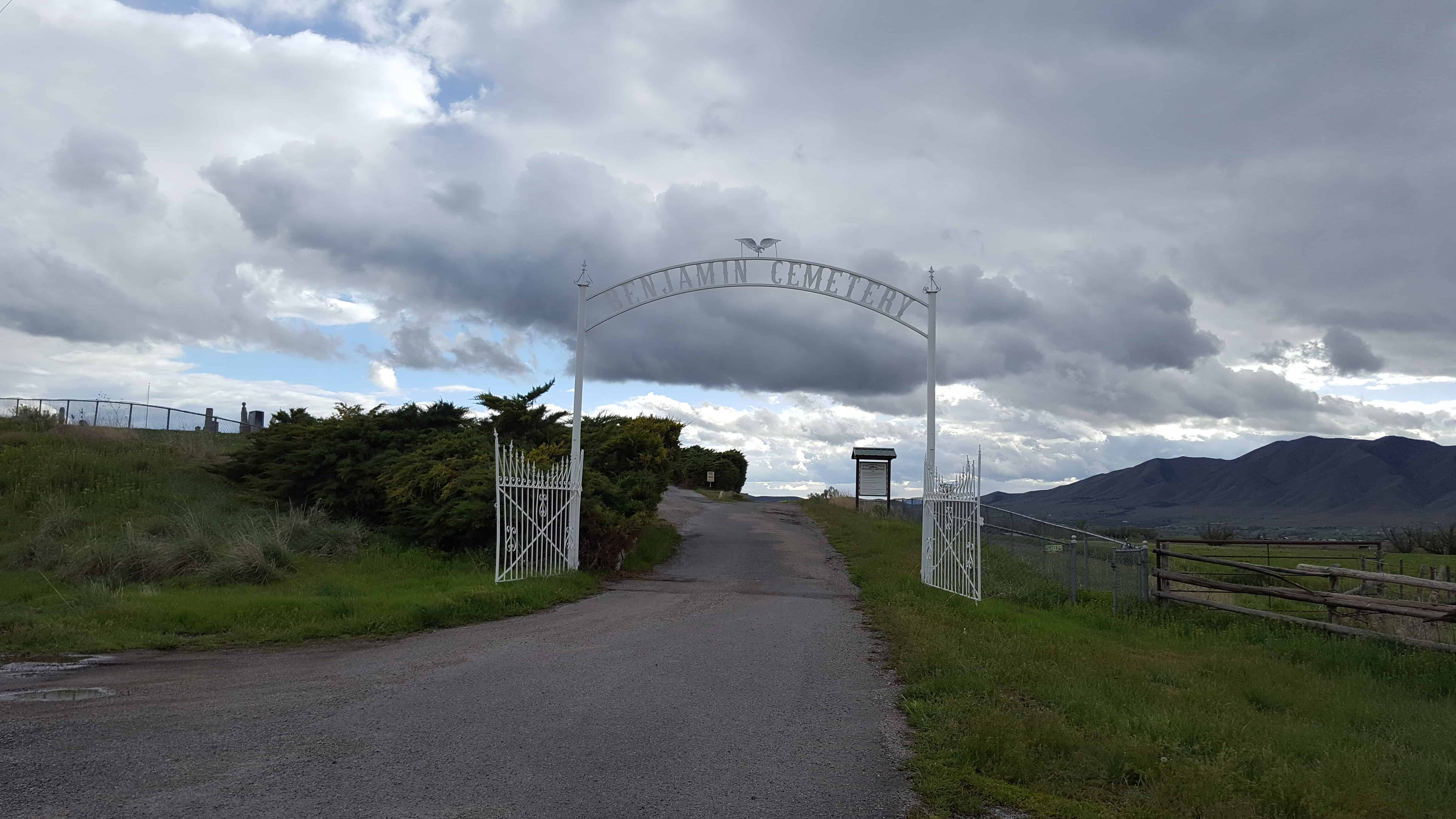 The Benjamin Cemetery isn’t big but it has some pioneer graves and a great view from up on a hill. 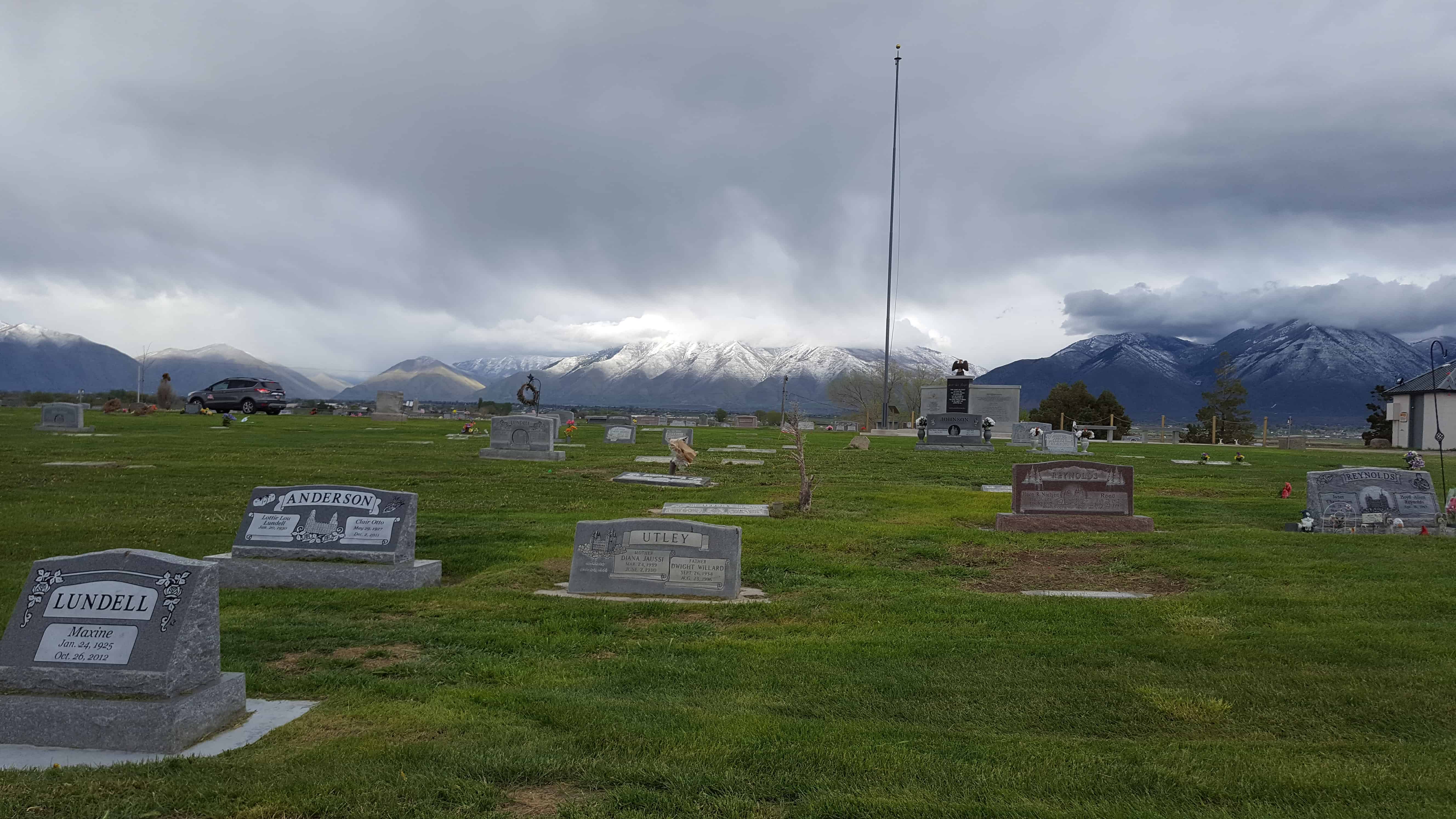 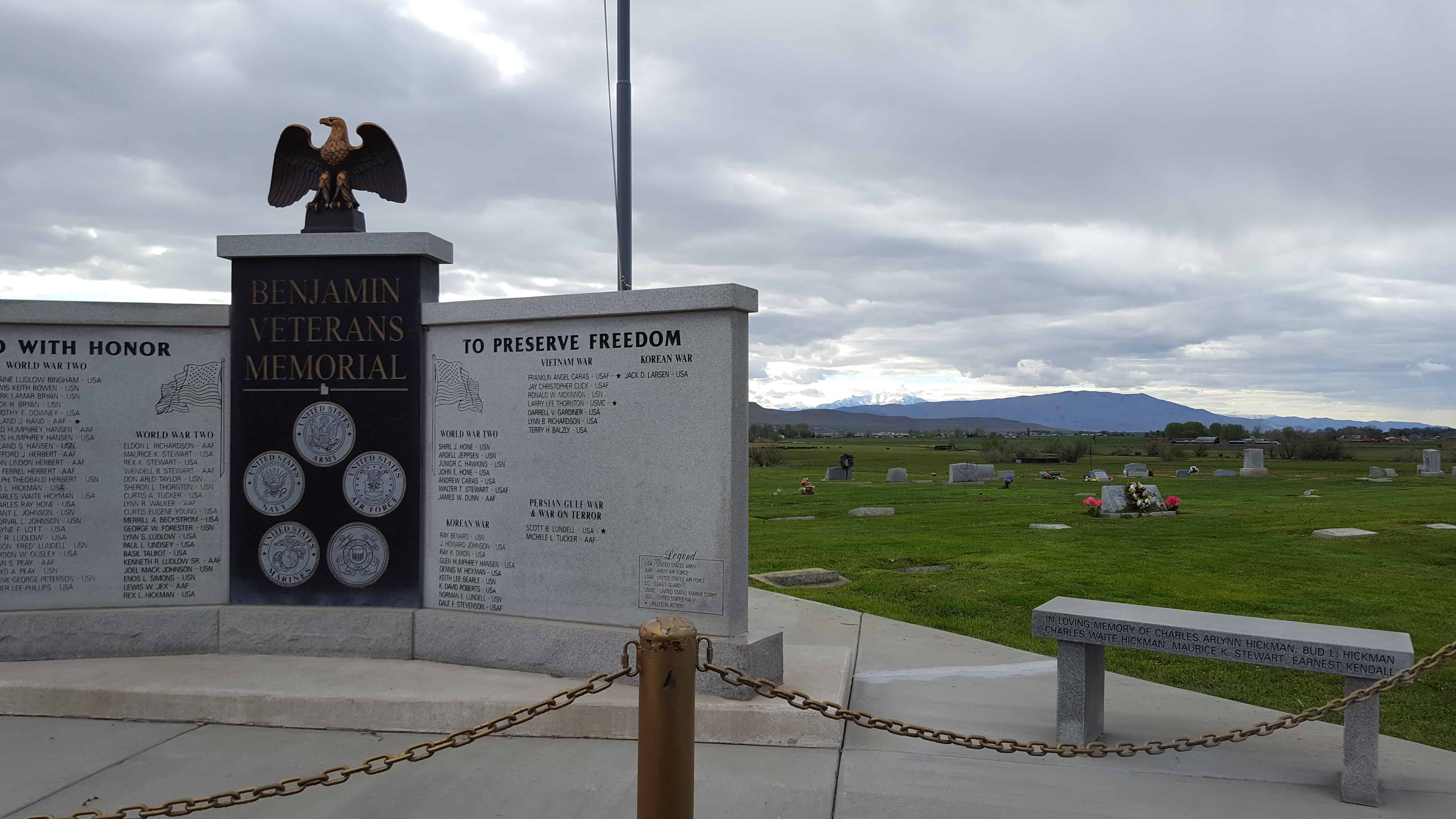 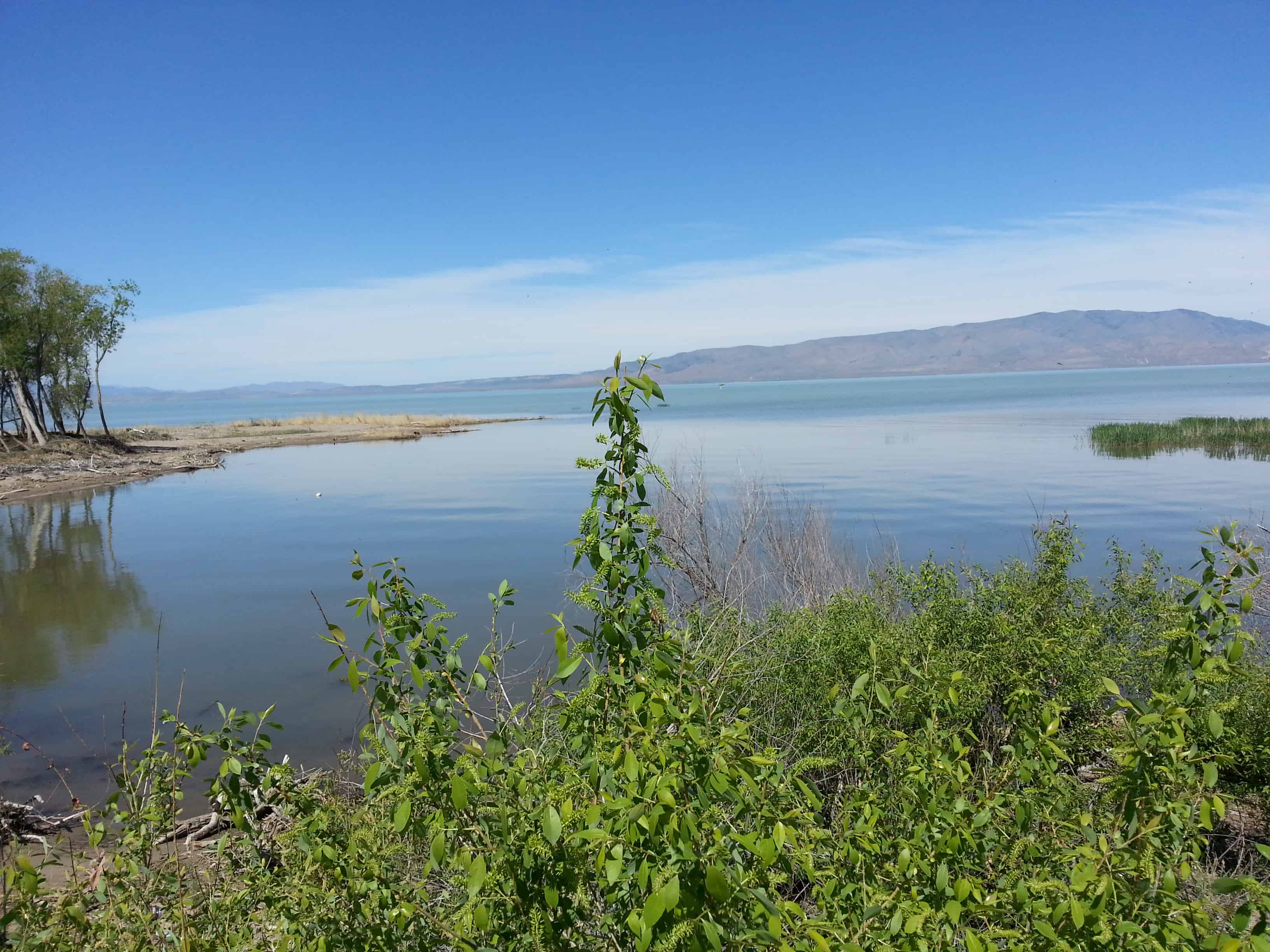 Sandy Beach is a really fun place to play in the summer, I have spent countless hours there. It’s one of the only places in Utah Lake where the bottom is sand instead of stinky mud and the water doesn’t really get deep – I can walk hundreds of feet out into the lake and still have my feet on the ground. It’s a fun place for fires and playing with kids in the water. 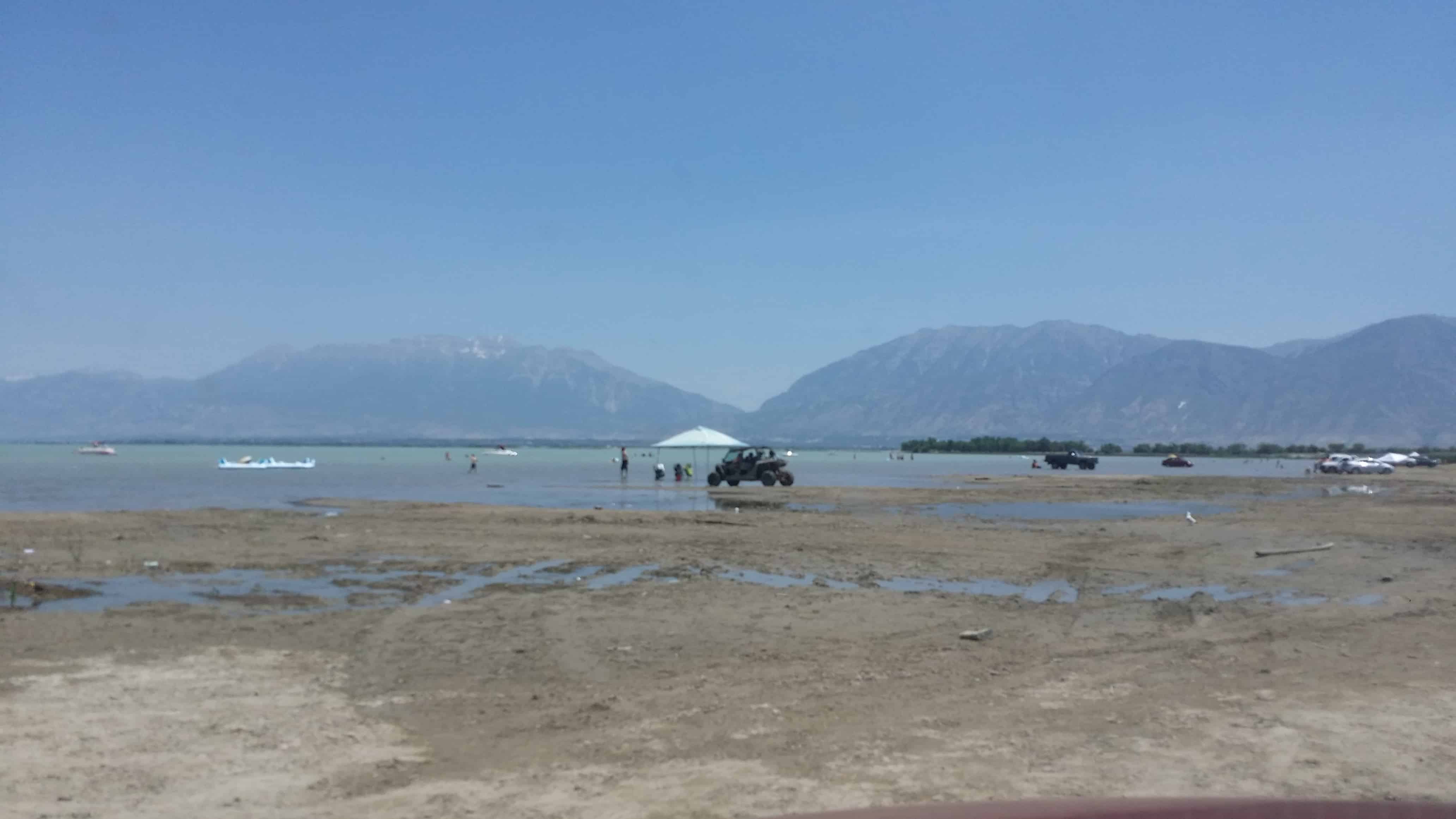 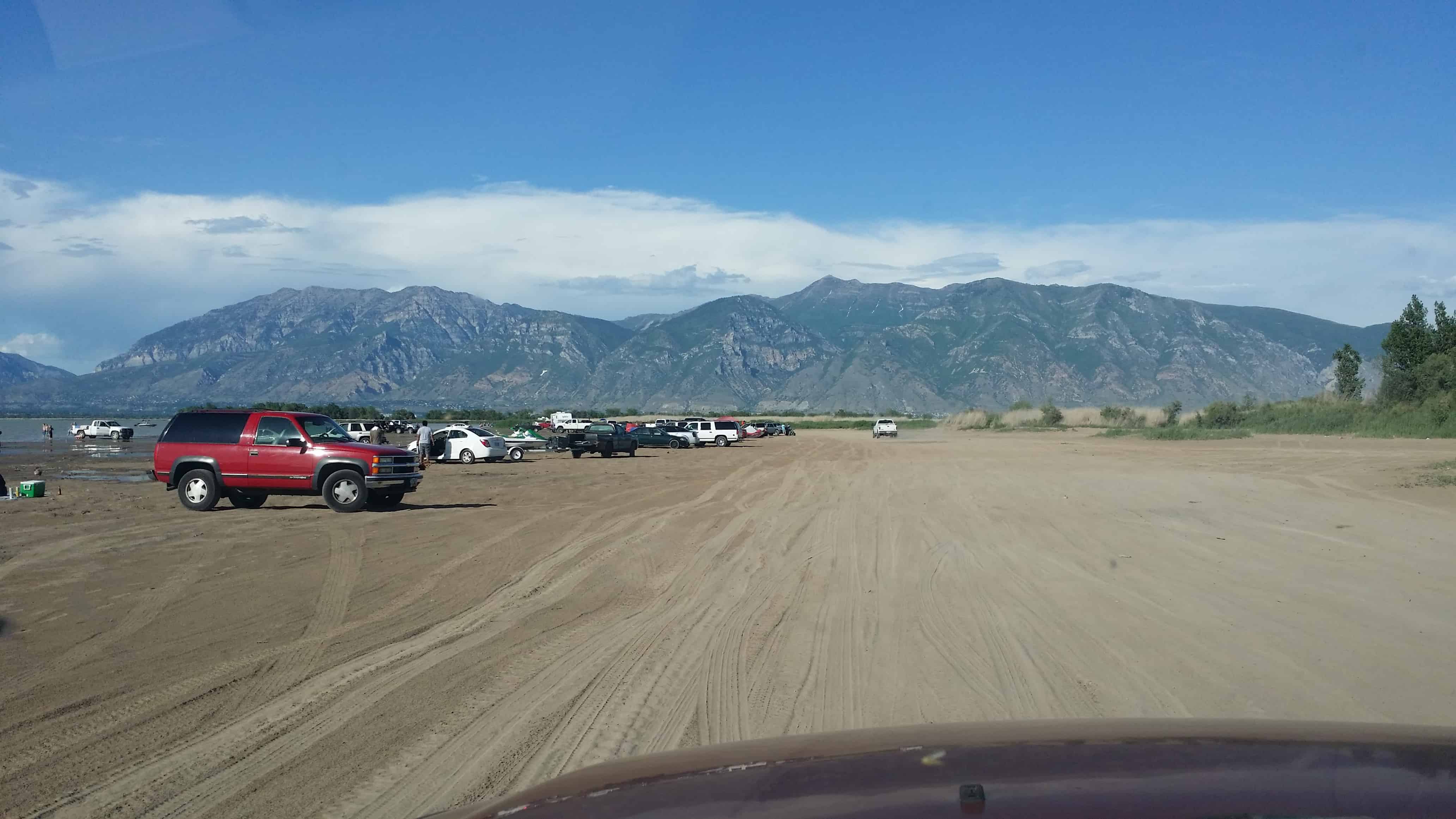 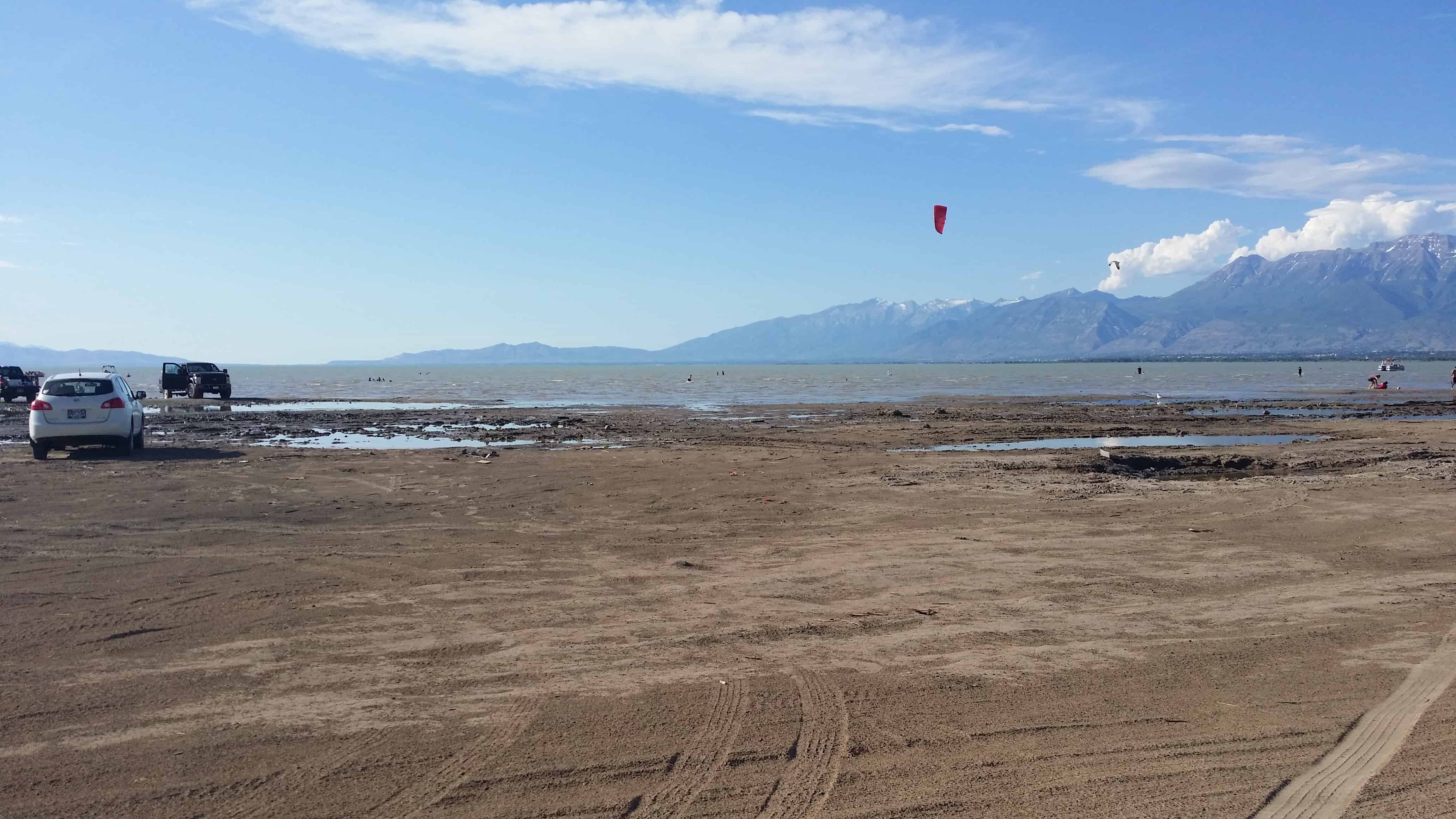 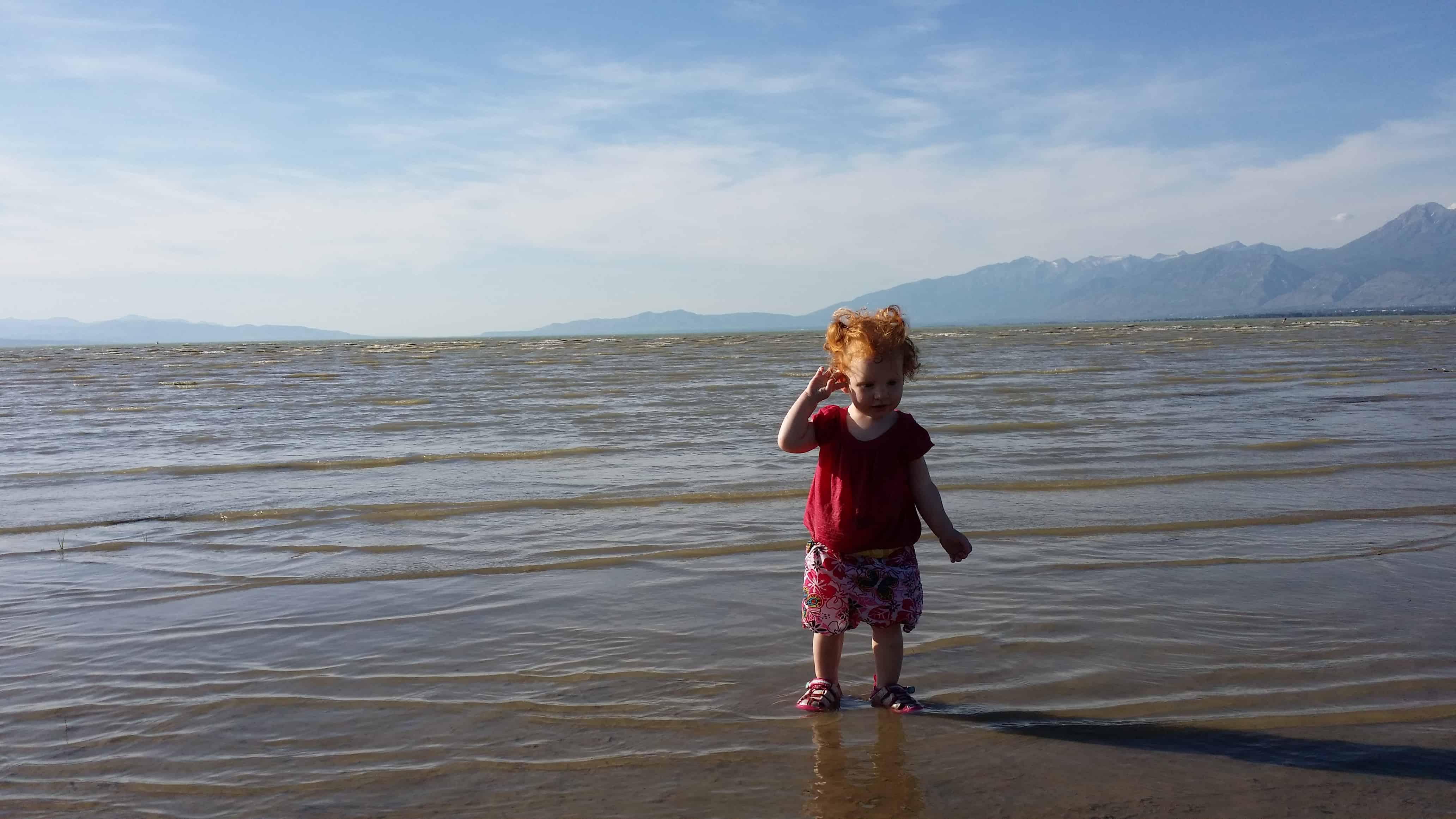 This is the house that was used for the movie Made Men (1999). It is the old Larsen/Moran house at 6850 River Road in the Lake Shore area.

In 1880 the Spanish Fork West Branch was formed with about 25 families. On June 12, 1886 a ward was organized and our town was named Lake Shore. The boundaries are West Mountain, Utah Lake, Spanish Fork River and 1/4 mile South of 6400 South. The first church dedicated in 1892, was where the chapel is today.

In 1881 the 60 owners of irrigation water were farmers who raised various crops, beef and dairy cattle. Wild grass was harvested on the many pastures.

In 1881 the first public building was the Blue Adobe School, three more buildings and also Furguson Hall were used as schools. The Lake Shore School was built on this spot and used for students up to 8th grade from 1922 to 1987. The original bell and sign from the Lake Shore School are on this monument.

Next to the monument with the bell is a commemorative drinking fountain for the first artesian well driven in this part of the Country, the rig was fashioned by Joseph Francis and with the help of his brother, Samuel, the well was driven in 1877 on the Samuel Francis homestead one and three fourths miles west of this spot.

This Monument marks the South-West corner of Fort Palmyra. This Fort was built by the settlers for protection. Palmyra was selected in 1852 as a suitable place to build a city by Apostle Geo. A. Smith. The first home was built in August of that year. W.W. Willis was its first Mayor. The first bishop was Stephen Markam. Silas Hillman was the first school teacher. Upon advice from President Brigham Young, the settlers of Palmyra moved to Spanish Fork, in 1856.

This marker was placed in 1933 and the D.U.P. didn’t start numbering their historic markers until 1934 so it is not in the numbered list. 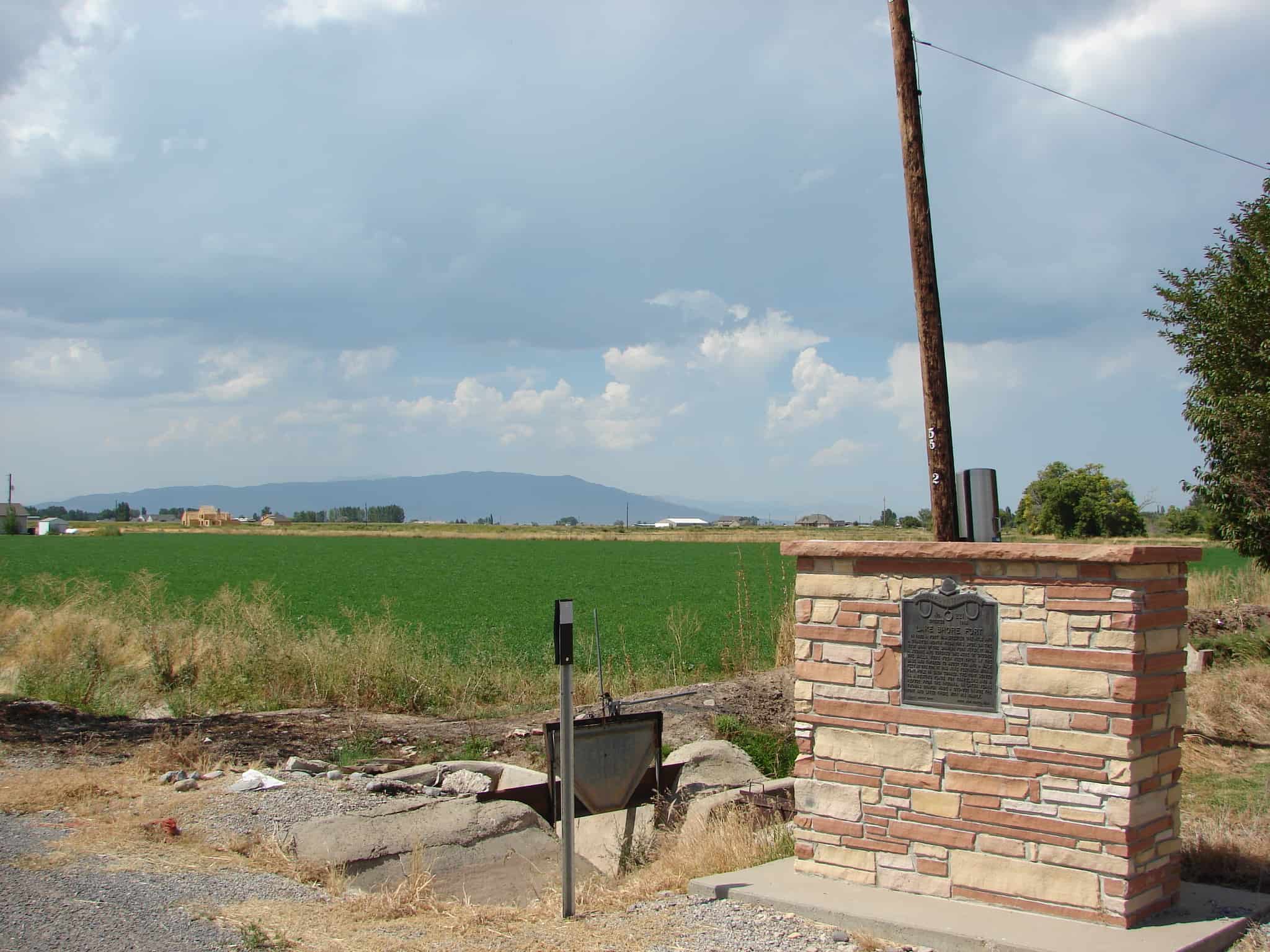 In 1865 a fort was erected one mile and a quarter north from this spot, on the west bank of the Spanish Fork River. It was a square and covered one acre of ground. The walls were four feet thick at the base and tapered to about two and a half feet at the top. It was nine feet high with a porthole in each corner. It first served as a resting place for travelers and a refuge from the Indians. In later years Thomas Draper made a dugout inside the fort and lived there with his family.