Located outside the Vernal DUP Museum at the old Tithing Office.

During the hard winder of 1879 flour was scarce in the valley. Flour was hauled from outside towns at great risk. A way to grind flour for the settlers was desperately needed. Two small crude burrs were hand hewn by Moroni Taylor for W.G. Reynolds, they were turned by horse or manpower.

In 1854 Anson Call of Bountiful erected a Grist Mill on the south side of Deuel Creek, just southeast of this marker. The mill was a three-story building made from Centerville Canyon rock, with the machinery on the top floor. The people brought their grain to be ground into flour, and the miller kept a portion of it as his pay. The power to turn the grinding wheels was generated solely by water flowing down Deuel Creek, which was run into two holding ponds on the hillside above the mill and then piped to a water wheel which turned the drive shaft.

The larger pond also served as a baptismal font for many of the pioneers. In the winter, when the water was frozen solid, ice was cut into blocks and stored in sawdust for use in the spring and early summer.

The first miller of record was a Mr. Southworth, followed by Messrs. Symns, Winn, McKinney, and Miller. For 15 years the mill lay idle until 1890 when Alwood Brown took it over. He renovated it and installed new machinery.

After Alwood Brown left, the mill was run by several others, including Mr. Everett, Mr. Hancock, and finally by Jim Brown. At one time Mr. Everett ran a wholesale bakery in the basement and drove a bakery wagon all over Davis County. He also had an ice-cream parlor, and so on warm summer evenings the young couples of the town would stroll up here for refreshments – and a little spooning. The place was romantic.

The mill was last operated in about 1905. The lumber was removed in the 1930s and the building fell into decay. The walls were blown in by east winds and the structure became dangerous, so it was completely torn down in 1944.

It was built in 1863 by Elam Cheney, Sr. a pioneer of 1847. At the request of President Brigham Young he quarried & shaped the stones & moved them & his family to Fairview where he also blacksmithed the iron & carpentered the wood.
The stones were turned by an overshot water wheel with water from the Sanpitch River.
– By the Cheney Family Association – 1965

During the winter of 1850-51, Arza and Sabina Adams moved their family of seven children here from Mill Creek, Salt Lake Valley. They built a log cabin across the street east of where you stand. Journals tell that Arza built a Grist Mill near his log cabin. Arza learned how to build and operate flour mills from his father, Capt. Joshua Adams, in Ontario, Canada. The Adams Flour Mill was the first to produce baking flour for American Fork families. In 1853 Arza moved the water wheel, mill stones and other workings 4½ blocks north of here and built a larger mill near the Lake City Fort. During his lifetime, Arza also built and operated a third flour mill one mile north of town.

No photographs exist of the original 1851 mill. The log cabin and water wheel in front of you is a replication of that grist mill. Arza Adams built this log cabin at 234 North 100 East, American Fork in 1880. It became the home of his daughter, Bets Adams Robinson. The cabin was taken down log by log in 2012 and reassembled on this site in 2014. The water wheel is a replica of a wheel built in the mid 1800s. This park property originally belonged to Stephen Chipman who was Arza’s maternal uncle.

This Log Cabin Grist Mill stands as a Historical Monument of American Fork City and a tribute to Arza Adams, pioneer miller and one of the co-founders of this city.

This is located in Centennial Park in American Fork.
See other historic markers in the series on this page for SUP Markers.

This flour mill was built in the fall of 1850 by Lorin Farr, first mayor of Ogden, and continued to operate until 1862. It was a 30 x 40 foot two story building of lumber and rock. The grain was ground by the use of burrs several of which were set up.

This other plaque is also located there:

This flour mill was built in the fall of 1850 by Lorin Farr, first mayor of Ogden, and continued to operate till 1862. There was a 30×40 foot two story building of lumber and rock. The grain was ground by the use of burrs several of which were set up.

Goshen Grist Mill was built in 1864 or 1865 by William W. Smith.  He operated the Mill south of present day Goshen on the creek until 1866 when the Black Hawk War forced him to move to Santaquin for protection.  Later the Edgar Finch family ran a farm where the mill was located.  They used the Mill Stone for many years as a front door step to their house.  That is why the bottom of the stone is broken off.  Historical information has been preserved by William Morris Smith a great grandson.  In 2003 the LDS Church purchased the farm from the Finch family and allowed this stone to be used for an Eagle Scout Project, organized by Vance Garner a 4th great grandson of William W. Smith in the spring of 2004.

Spanish Fork was settled in 1857. The first flour mill was built by Archibald Gardner in 1858-59. The water for the mill came from the Spanish Fork River. The stream was enlarged to give sufficient power to run the mill. This mill was constructed of rough lumber.

The grinding was accomplished by large round granite stone burrs about four feet in diameter and two feet thick. These stones had grooves running across them; the lower stones remained stationary while the upper one rotated. The wheat came to the center of the burrs through a wooden chute. The husks of the kernels of wheat, when separated, were called bran; the next finer are the shorts; and the finest made of flour. The burrs frequently had to be dressed to keep them in good operating condition. Gardner sold the mill to the Spanish Fork Co-op in 1874. Shortly after it was torn down, it was replaced by a larger, two-story building with more advanced equipment.

This mill was built of shiplap lumber with gables facing north and south. The flumes carried water to the mill wheel, with a fall of twenty feet. Flour was made in the mill for fourteen years until April 15, 1888, when it burned to the ground, probably from spontaneous combustion. Within a short time, a four-story brick building was started at a cost of $40,000. New machinery was installed, and large steel rollers replaced stone burrs. The new mill burned in December 1927. It was never rebuilt. Today nothing remains of the once busy whirring mill. 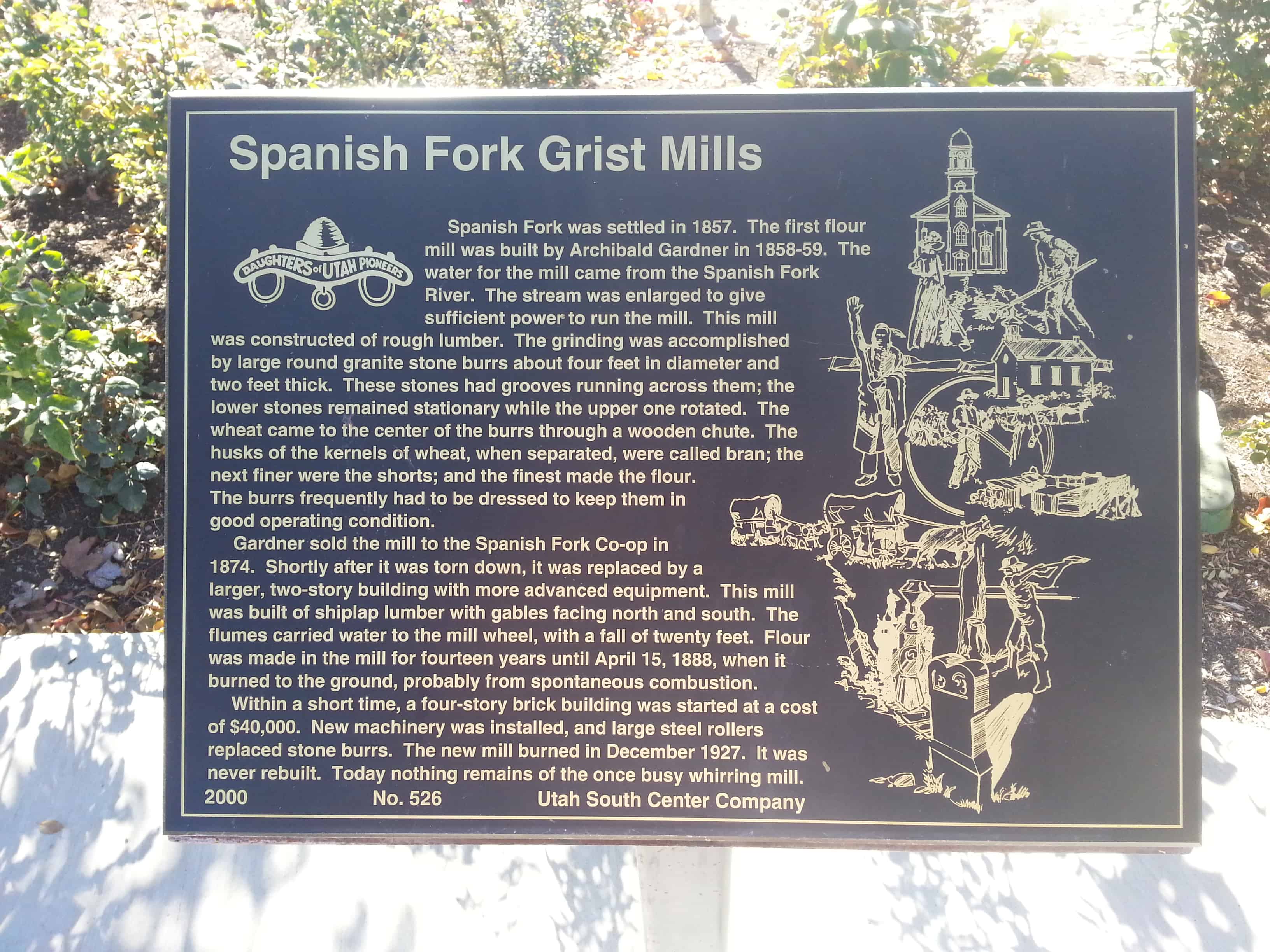